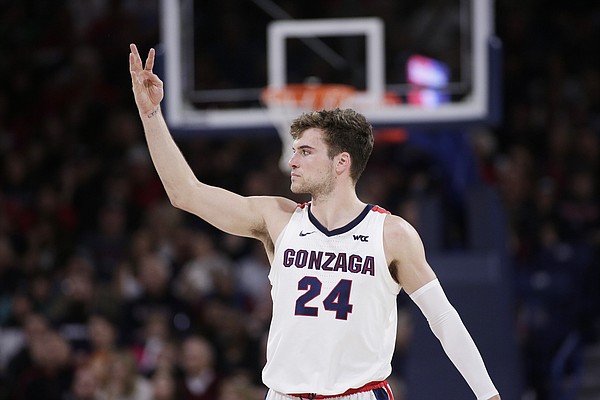 So much for easing into the season.

Forget those friendly exhibitions in Allen Fieldhouse of years past, in which Kansas pulverizes in-state programs. This is 2020. There is no normal. And the Jayhawks’ first game in more than eight months is about to come against preseason No. 1 Gonzaga.

KU, ranked No. 6, could very well go the entirety of whatever the 2020-21 season ends up looking like and never again face as skilled a trio as Gonzaga’s Corey Kispert, Drew Timme and Jalen Suggs.

The Athletic just published its rankings of the top 20 guards, wings and bigs in the country entering the season, and the Zags had a representative on each list.

A 6-foot-7 senior wing who last year drained 43.8% of his 3-pointers and was a first-team All-WCC selection, Kispert is considered by many to be one of the top returning players in the nation. The Athletic ranked him the second-best wing in all of college basketball, behind only Virginia’s Sam Hauser.

As Eamonn Brennan highlighted in his breakdown of Kispert, the senior has taken advantage of more opportunities off the bounce as his career has advanced, becoming more than just a spot-up shooter.

“He’s not an individual playmaker or a guy who needs to have the ball in his hands all of a sudden,” Brennan added about Kispert, who averaged 13.9 points and 2.1 assists as a junior last year, when Gonzaga went 31-2. “He remains functionally what he has always been — a humble player happy to do the work.”

Inside, like all of head coach Mark Few’s teams do, the Zags have a reliable big man. This year it’s 6-10 sophomore Timme. He averaged 9.8 points and 5.4 rebounds as freshman, and shot 61.8% from the floor while playing 20.5 minutes a game. The Athletic rated Timme the seventh-best big in the country entering his sophomore year.

While the Zags lost last year’s leading scorer, 6-11 Filip Petrusev (17.5 points, 7.9 rebounds), to the professional ranks, Timme is expected to be plugged in and produce.

And while he has yet to play a college basketball game, explosive 6-4 freshman Suggs is regarded as a spectacular addition for one of the country’s most recognizable programs. The Athletic graded Suggs as the No. 15 guard in the nation.

“Suggs does not look like a freshman,” CJ Moore wrote for The Athletic, “and physically will be on another level in the WCC. He can fill up a box score, and what sets him apart from past Gonzaga star guards is the athleticism.”

Jalen Suggs could be the best PG in college basketball this year! @JalenSuggs2020 pic.twitter.com/zNkKwqEFfS

None by Courtside Films

The Zags are so loaded that they even have a player — redshirt junior Joel Ayayi (10.6 points, 6.3 boards and 3.2 assists last year) — who didn’t end up on those top 20 lists but joined Kispert, Timme and Suggs on the preseason Naismith Trophy watch list.

The Jayhawks, of course, have plenty of depth to throw at their talented opponent this coming Thursday in Fort Myers, Fla. But only two KU players landed on The Athletic’s top 20 listings. Senior Marcus Garrett checked in at No. 5 on the list of college hoops’ best guards and junior Ochai Agbaji was rated the 10th-best wing.

And while junior David McCormack might not have much national buzz surrounding his name, his head coach, Bill Self, thinks McCormack has been the team’s best player in the preseason and is expecting a productive year out of the 6-10 forward.

Can the Jayhawks’ top trio outplay the three best Zags?

Regardless of whether KU comes out of this season-opening clash on top, the Jayhawks will face another loaded trio on Dec. 1, when they take on Kentucky’s Olivier Sarr, Terrence Clarke and Brandon Boston Jr. — all of whom were featured on The Athletic’s top 20 lists.

I can't wait for this game.

Glad this is not the nba where you need 3 top players and filler.