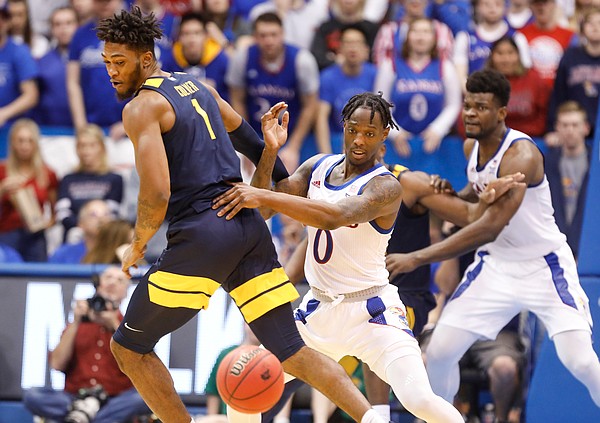 In order to truly feel comfortable with a given lineup, Bill Self likes to have at least two of his Kansas basketball team’s three best guards on the court. The Jayhawks’ collective effectiveness, after all, takes a hit without some combination of Devon Dotson, Marcus Garrett and Ochai Agbaji out there.

In a perfect world, Self would be able to rotate one of those players in and out for each other during a given game’s second half. But a recent trend has made that a little more difficult to pull off.

Garrett, KU’s versatile junior guard from Dallas, has found himself in foul trouble in each of KU’s past two games, picking up his fourth with 8:17 left at Stanford and 9:08 remaining against West Virginia.

When Self can’t play Garrett with four fouls in a close game, Dotson and Agbaji aren’t afforded a breather, because the head coach doesn’t really want to experience a lineup that could prove more erratic.

Garrett, a creator with his driving and passing on offense, and the Jayhawks’ most sound and adaptable defender, missed close to four minutes of game time in the second half against both Stanford and WVU. He’s been whistled for four fouls in five of KU’s past seven games and six times overall this season — though he’s yet to pick up a fifth in any of the Jayhawks’ 13 games to date.

So what exactly is Garrett doing to get himself in fairly regular foul trouble?

Of course, there’s more to it than that for Garrett (listed at 6-foot-5 and 195 pounds). Thanks to the quickness and defensive instincts of Dotson (2.4 steals per game), Agbaji (1.7) and Garrett (1.7), KU averages 9.0 swipes per game. At times, Self noted, Garrett has shown a tendency “to take the bait” when he spots a potential steal.

In KU’s Big 12 opener, Dotson and Agbaji played all 20 second-half minutes as a result of Garrett’s foul trouble in a tight game. Garrett doesn’t have many defensive flaws, and even this one comes from a place of assertiveness and confidence — not at all bad attributes to possess when he’s trying to get stops.

Garrett is so smart with his decisions on the floor, it’s hard to imagine this remaining a consistent issue for him as Big 12 play picks up and his presence becomes all the more important. Look for him to adapt and adjust — and do his teammates a favor, by letting them get a rest now and then.

Negatives outweighed by the Positives!