Jayhawks need to give Isaiah Moss some help outside the arc 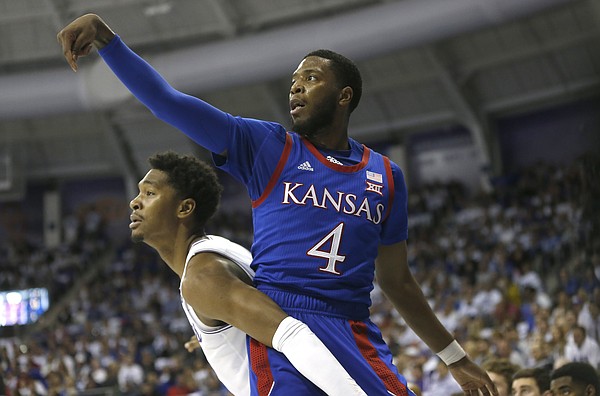 Kansas guard Isaiah Moss (4) scores on a 3-point shot as TCU forward Diante Smith (10) looks on during the first half of an NCAA college basketball game, Saturday, Feb. 8, 2020, in Fort Worth, Texas. (AP Photo/Ron Jenkins) by Associated Press

There’s no question that Kansas coach Bill Self is happy with the recent play of his team’s 3-point specialist, Isaiah Moss.

“Why wouldn’t I be?” Self said Friday, when asked about the surging senior marksman, who helped No. 3 Kansas stay unbeaten in Big 12 road games, with a 58-49 win at No. 14 West Virginia.

Self didn’t share his specific feelings about the recent 3-point accuracy — or lack thereof — from the rest of the Jayhawks. But KU’s coach did mention his team made exactly four 3-pointers in each of its two road wins this past week.

“He’s made six of them,” Self pointed out of Moss, a 38.8% career 3-point shooter over the course of three seasons at Iowa and 23 games at KU.

The past couple of games in particular, Moss has proven to be the exact version of himself KU needs offensively — 3-for-8 from long range at TCU and 3-for-5 at WVU.

He could clearly use some help. While Moss was fulfilling his role in two impressive, defense-first road victories for the Jayhawks, the rest of the team combined to shoot 2-for-14 in the past week.

In the two games prior to those, KU went 4-for-13 against Texas Tech and 2-for-12 versus Texas. No single Jayhawk made more than one 3-pointer in either of those home wins.

“It’s ridiculously poor how we’ve shot the ball beyond the arc,” Self remarked. “But also you can look at it like thank goodness we’ve got (Moss).”

With the end of the regular season now just three weeks away, KU is shooting 34.2% on 3-pointers as a team this year (131st nationally as of Friday). However, the Jayhawks are making only 31.9% of their 3-pointers in Big 12 play, placing them fifth in the conference entering this weekend’s slate of games.

KU’s lack of consistent shooting has been an ongoing discussion this season, and when those conversations are happening Moss isn’t the only player considered a reliable option. Freshman Christian Braun needs to be a good shooter for the Jayhawks, too, as Self doesn’t mind bringing up. 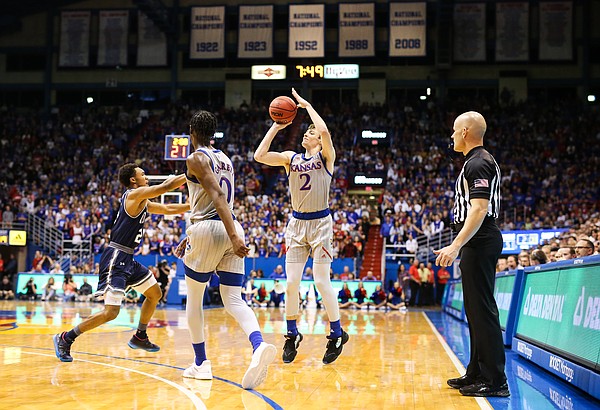 Kansas guard Christian Braun (2) puts up a three from the wing during the first half on Friday, Nov. 15, 2019 at Allen Fieldhouse. by Nick Krug

Braun didn’t attempt a single 3-pointer in KU’s two wins at TCU and WVU, while playing a combined 36 minutes. He also went 0-for-2 against Texas and last connected on a 3-pointer during a game on Feb. 1, going 1-for-2 versus Texas Tech.

Yet Braun is responsible for some of KU’s most eye-popping 3-point displays this season, going 6-for-10 versus Kansas State and 4-for-8 at Oklahoma State.

The Jayhawks need Moss and Braun firing because they’re easily the best shooters in the rotation.

Sophomore point guard Devon Dotson hasn’t hit more than one 3-pointer in a game since KU played at Iowa State on Jan. 8. WVU strategically left him open earlier this week, as Dotson went 1-for-5 while playing through some right knee soreness that had kept him out of practices the previous few days, Self shared.

Junior guard Marcus Garrett will take 3-pointers when the defense leaves him wide open and the shot makes sense in the moment. But he hasn’t buried a 3 since KU’s Jan. 14 win at Oklahoma. Garrett didn’t put up a single 3-pointer in four outings of that eight-game stretch, during which he was 0-for-7.

Sophomore Ochai Agbaji gets hot from behind the arc occasionally. But since a 3-for-7 afternoon in the SEC/Big 12 Challenge against Tennessee on Jan. 25, Agbaji has gone 4-for-18 (22.2%) over his most recent five games.

Agbaji enters Saturday’s rematch with OU shooting 34.6% from downtown as a sophomore, but that number dips to 25.6% in KU’s 11 Big 12 games to date.

Moss is KU’s green-light shooter, and Self thinks the graduate transfer understands that. But the Jayhawks will need Braun to adopt a little bit of that same mentality and wait for Dotson and Agbaji to shoot their way out of their slumps before the offense is able to peak.

KU has gotten away with being a mediocre to poor 3-point shooting team this season because the Jayhawks are playing elite defense (No. 1 in adjusted defensive efficiency, per KenPom.com). But if they’re somehow able to pair that defense with some consistency from outside, they would become a dominant team.

The key will be confident shooting from Moss and Braun, paired with Dotson (a good free-throw shooter, at 80.6% this season) and Agbaji improving for the stretch run.

Ochai Agbaji on how KU’s defense has improved since last meeting with OU by KUsports.com

Marcus Garrett on where his defensive intensity comes from by KUsports.com