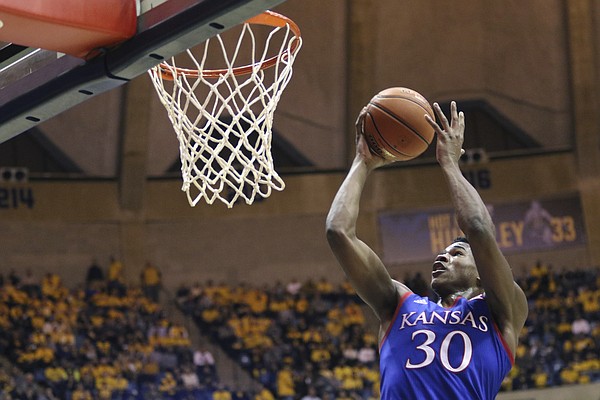 His name isn’t the first, second or even third to come up in most conversations about the No. 3-ranked Kansas basketball team.

Nevertheless, the underappreciated Ochai Agbaji has proven instrumental for the Jayhawks in their pursuit of No. 1 Baylor.

So gifted athletically, the sophomore guard seems to leave some wanting more. And now. More 3-pointers. More drives. More points. KU does have to grind through so many games, after all.

Just keep in mind Agbaji is KU’s third-leading scorer (10.2 points per game) on a roster with two potential All-Americans in Devon Dotson and Udoka Azubuike providing most of the scoring. Agbaji isn’t going to transform into a go-to bucket-getter who suddenly puts up 15 to 20 points a game this season. And there’s nothing wrong with that. You’re not going to get all of your guards pouring in points night in and night out — not in college basketball.

Every once in a while, Agbaji will catch fire from 3-point range and provide KU with a boost that makes winning go more smoothly for this defense-first KU roster.

But his 34.6% 3-point shooting is not something that should be counted on. Nor should anyone hold it against Agbaji when he’s blending in instead of firing at will.

The sophomore guard has only played in 46 career games, remember, because his would-be redshirt season a year ago disappeared once KU lost Azubuike due to injury. Agbaji won’t be two full seasons into his college career until January of 2021.

Give the still-young player some time to grow and he’ll be soaring over those high expectations some have for him eventually.

Agbaji obviously didn’t dominate offensively at West Virginia, where KU (21-3 overall, 10-1 Big 12) extended its current win streak to nine games and improved to a perfect 6-0 in Big 12 road contests. But he sure wasn’t passive, either. He blew through lanes to the basket when given the chance by the mostly staunch Mountaineers defense.

The 6-foot-5 guard from Kansas City, Mo., attacked the rim, creating a layup for himself a few minutes in, as KU set a promising tone offensively, with a variety of Jayhawks piling up points in the paint. Later in the first half, he took a steal the other direction for a fast-break layup.

When his 3-pointers weren’t dropping, he kept looking for other avenues, and opened up KU’s second half with another transition lay-in. He’d pull off a third fast-break hoop before long on a 4-for-7 night that produced 9 points. And over the course of the game he drew three fouls from WVU defenders.

The more Agbaji plays at KU, the better he’ll become at making the most of his athleticism, an area where he often has the advantage over the man across from him.

Right now there are times when he’ll go stretches without showing up in any statistical column. But there’s something about his presence — and how he fits with Azubuike, Dotson and Marcus Garrett — that helps this team meet its defensive potential. And that’s the end of the court where the Jayhawks are winning these games.

Agbaji rarely left the court at WVU, sitting for all of 53 seconds. Coincidence or not, when he took a breather, WVU rattled off 5 quick points. He didn’t sit at all in the second half. And, of course, Agbaji was a key part of the most effective KU lineup at WVU. Azubuike, Dotson, Garrett, Agbaji and Isaiah Moss played 16:12 together, and those five outscored the Mountaineers, 29-10.

His defense, effort and attitude keep him on the court. If he had any major failings as a player, he wouldn't be playing 33.9 minutes a game.

In a perfect world, yes, KU would take an offensive late-season metamorphosis from its starting sophomore shooting guard. But this is reality. For now, just give Agbaji some room to breathe and keep developing.

The scoring spike will come, probably when KU really needs that from him next season. Trying to force the issue with Agbaji at this point seems unwise anyway, with this team’s impressive chemistry.

KU plays through Azubuike in the half court whenever it can, capitalizes on transition opportunities with Dotson pushing the tempo or Garrett creating takeaways if possible, and otherwise gets most of its offense from Dotson’s and Garrett’s drives to score or pass. It’s not a formula that overwhelms opponents, but it’s working.

The Jayhawks could reach another level this season with some added scoring punch. But no one Jayhawk is going to change that on his own. KU will be better off if the seven regulars in Bill Self’s rotation do that collectively.

Agbaji could provide a scoring uptick by staying assertive. And so could the rest of his teammates.

I've never seen Ochai as lacking. I seem him as developing and he is an important part of this team.

Moving without the ball, we can definitely use him for cutting or lobs. I don't think he's developing enough in terms of shooting or ball handling. Just look at his stats. He hasn't developed much offensively. Seriously, wake up folks.... Let's face it. We don't have capable coaches who can help develop kids into better shooters.

If I may say, Agbaji should learn how to relax his shooting palm when he pulls a J. His hands are too stiff. The same thing when he dribbles. Boooy... he looks like a 50-yr old grandpa. He needs to use that athleticism of his - be more bouncy, be more explosive. Don't underestimate the importance of wrist snapping and ball palming when it comes to pull a J and dribbling. That's 101 in basketball.

He needs to develop better handles on the ball and some confidence in his passing skills. His entry passes to the post are always very tentative and that leads to errors. He does not dribble the ball well enough to be consistent in driving to the hoop. If he improves in those two areas we will further appreciate his team efforts at rebounding and defense. Good kid. Will continue to get better.

Ochai's a bit of a victim of his own early success from last season. He was a gang buster those first several games he played in last season, but hasn't quite been able to live up to that same level of hype, none of which he asked for. He's an underrated defender and obviously a huge part of the success this team is having.

I think he's fitting perfectly for this team this season. But I will say, this upcoming offseason, he needs to get that jumper at a higher level and ball handling will need to improve. Creating separation with his athleticism and being more assertive will be two more areas of improvement as well.

I do think he's progressing though, it just may not be readily apparent. He's a starter and he plays a key role on this team.

His development reminds me a lot of Wayne Selden (spell?). Wayne didn't handle well and his 3 was inconsistent until later in his career. Ochai's start last season illustrates just how well these teams scout. The first couple of games teams had no idea he would do the things he does. I think he's of HUGE value to this group now and will still only get better with confidence.

Born in Milwaukee, O.A. resembles a mini version of the "Greek Freak"!

He definitely has a very high upside, and will continue to improve his game.

He does appear to be a bit hesitant (perhaps thinking too much).