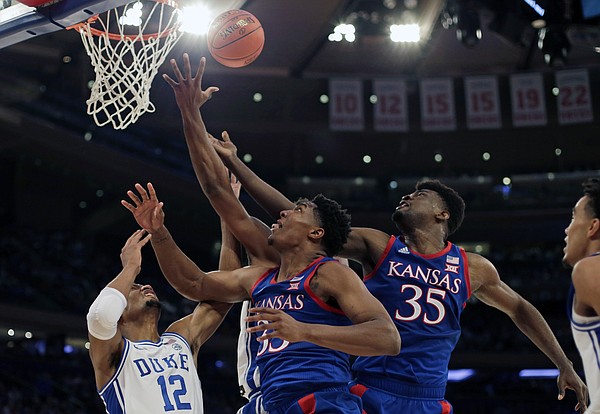 Bill Self hasn’t. It doesn’t even sound like he has bothered locating his shovel.

KU’s head coach wants to see more evidence of what combinations of Udoka Azubuike, David McCormack and Silvio De Sousa can do for the No. 5 Jayhawks before he gets too caught up in what they haven’t a couple of games into a long season.

“Right now” Self is sure to emphasize — meaning he doesn’t necessarily believe the statement will be true in the future — KU’s offense is better with four guards on the floor. It may be more a sliver of optimism than stubbornness that has Self waiting to watch it all play out.

The reasons to stick with two bigs are obvious. If it works, KU should theoretically be able to maximize its rebounding and rim protection, while also having larger bodies to set screens for various offensive actions and sets. The idea would be that the Jayhawks get such a boost in those areas that there’s a net gain outweighing the negatives that accompany playing two bigs.

And the most obvious unwelcome results could come on the defensive end of the floor. College basketball lineups are more perimeter-oriented now, so if Self has two of his three largest bodies on the court at the same time, either McCormack or De Sousa will have to defend someone who plays more like a wing when KU opponents have four-guard lineups. (Seven-footer Azubuike won’t be the one asked to pull that off.)

Think about Self’s KU teams through the years, since he came to Lawrence in 2003, and consider what usually inspires him to pick one player over another or one lineup combination over another. It’s defense. Self cares about that and the toughness associated with playing it more than how many more 3-pointers the Jayhawks can hoist with four guards.

Just as issues currently exist offensively for this roster when KU rolls with two big men — neither McCormack nor De Sousa can help space the floor as shooting threats — there are factors on the defensive end of the floor that could eventually lead Self to pivot and stick with one post player.

“Our two bigs — which are true bigs, it’s not like they’re really tall guards or perimeter 4-men — our bigs are all big,” Self said of what makes playing two of them at once risky at times for KU’s defense.

“How are we going to guard ball screens? If we switch,” Self added, “can one of those guys — Silvio or David — stay connected and be a good perimeter defender? And if we don’t switch how do we get back to shooters?”

All of those defensive actions and reactions become simpler when KU has four guards on the court. So KU’s coaches have kept working with McCormack and De Sousa to see if they can make enough improvements as defenders outside to make these not so modern lineups worthwhile.

Neither McCormack (listed at 6-foot-10 and 265 pounds) nor De Sousa (6-9, 245) is going to transform into the type of versatile 4-man defender Self loves — think Josh Jackson. But they aren’t so awful that Self has abandoned any hope of them getting better out of their element.

Self, if so inspired, will blast a player for not performing up to the coach’s standards or call one out for being “soft” in some way, shape or form. But he didn’t say anything close to that during his weekly press conference on Thursday afternoon at Allen Fieldhouse.

Instead, Self said this of McCormack and De Sousa as perimeter defenders: “I think they’re getting better at it.”

Junior guard Marcus Garrett, often lauded by Self for his basketball IQ and defense, said during the team’s closed practices he sees McCormack and De Sousa improving. When screens call for one of the bigs to switch, Garrett shared, he sees both taking pride in “actually guarding on the perimeter.”

“Just staying in front of the ball when they get a switch. Just don’t let a guy just make one move or play with the ball and go right by him,” Garrett gave as examples. “I’m starting to see them move their feet and actually being active once they switch on a guard.”

It obviously doesn’t always go according to plan. Asked whether one of the bigs ever has to guard him outside and how that goes, Garrett just tried to hide a grin and didn’t need to provide any details that would make a teammate look bad.

Even if the improvements McCormack and De Sousa have displayed during practices have been minor in the near week since matchups with perimeter-oriented UNC Greensboro led Self to play four guards for 35 minutes, the fact is Self wants KU’s two-big lineups to work.

It’s doubtful any combination of KU’s two bigs will become so overwhelming that going large will turn into the Jayhawks’ sole identity this season. But the goal should be flexibility. And having some of that on the defensive end of the floor always comes in handy in March. Round by round, one never knows what matchups the bracket might spit out. Ideally, Kansas will be able to adjust and feel comfortable with two bigs defending or just one.

So think of the longterm and defensive upside if Self seems more patient with two bigs than you figured.

Bill Self speaks to reporters ahead of Monmouth by KUsports.com

Marcus Garrett ahead of matchup with Monmouth by KUsports.com

Udoka Azubuike ahead of matchup with Monmouth by KUsports.com

If our opponent struggles with their 3 ball, then I think we can go the 2 bigs route in those instances. But those teams that have decent outside shooting is going to make the 2 big offense a real challenge for us on defense. The game has really changed in the last 5-10 years.

i'm sorry,but I REALLY don't like the 2 big lineup for KU this year. It clogs up the lane where Dok needs room to be able to do anything. None of the bigs are good passers. We also have 2 guards that rely heavily on driving which, once again, 2 bigs clog up the lane for these drives. If any of the bigs could pass or consistently hit an outside shot, then maybe, but the team looks so much better with 4 players that can shoot. Personally, I would start Enaruna at the 4. He seems to have a lot of potential and is really long and shows a lot of upside.......

Playing two bigs doesn't necessarily make it more difficult for the perimeter players to drive. Maybe if you are playing a double low post offense all of the time it does, but how often does Bill Self team do that. You will probably see two different modes of offense with the two bigs other than that. One you can see high low sets, where I believe McCormack has actually looked decent with his passing ability out of that already, and two you can have a mode where both big men are running around setting tons of ball screens. That type of offense can be really effective at helping guards break lose on a drive to where they can either get all of the way to the rim if help defense doesn't arrive in time or throw a lob to one of the big men if it does. This team has perimeter players that can really get past defenders especially with the help of a screen and it also has big athletic post players that are really good targets for lobs. This was the type offense that worked brilliantly for the 2008 national champions, and it can be a really effective offense for this team as well. They just need time to work on those actions and those lob passes in practice.

It is always great to have flexibility. I believe this KU team will eventually have the ability to play effectively either big or small, but the 2 big line up once it gets up and rolling is the one that gives this team a chance to be special. That being the case, it doesn't surprise me at all that Bill Self has not given up on the big line up.

Couldn't agree more with you on bigs' screen, Mike. The funny thing is, coach BS is a veteran, why haven't we seen effective use of the bigs during the 2B lineup? Don't they practice other plays knowing that playing hi-low doesn't buy us a lot of buckets...? I'm not too optimistic about coach BS playing 2B with plays other than hi-low. Besides, we don't have the right PG. We definitely need a play-maker PG, someone like 'Tae, RussRob, Vaughn. I saw Marcus has potential. But he gives up ball too quickly. Dotson, well, he cares about his score too much. Remember when 'Tae was still around? How many did we see Lightfoot's pick n roll resulted in easy dunks? How many lobs did we see from Dok? Compared that to last year. How many did Dotson lob to bigs? Open up your eyes, coach. You're not going to see any effective offense if Dotson does not change his priority. Period. Forget about our defense.

I can’t picture Enaruna defending 4s. He is rail-thin and way under-strong.

Watch the replays, he had 6-7 DRebounds, at least 3-4 blocks, 2 steals. If you see him playing defense, he's got solid defensive stand - legs wide open, while staying low and keeping his long arms ready. This kid can defend college's 4s.