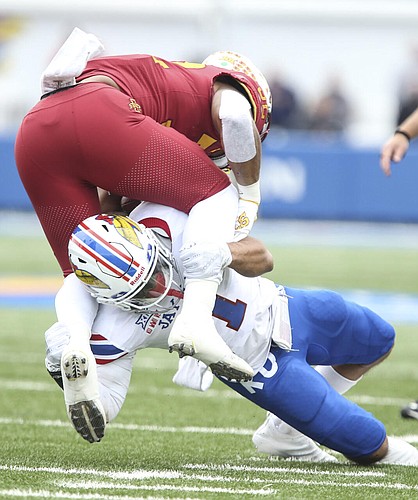 Kansas safety Bryce Torneden (1) gets under Iowa State running back David Montgomery (32) for a stop during the first quarter, Saturday, Nov. 3, 2018 at Memorial Stadium. by Nick Krug

In a secondary full of veterans who will need to carry the Kansas defense, no one takes on every layer of that responsibility as fervently as senior safety Bryce Torneden.

A homegrown Jayhawk who took on a starring role at Free State High in KU’s backyard before he joined the program under the previous coaching regime, Torneden enters his last go-round at Kansas as the defense’s most likely playmaker.

Starting all 12 games of his junior season at nickelback, Torneden racked up 91 total tackles, 5.5 tackles for loss, two sacks, two quarterback hurries, two fumble recoveries and an interception. Now that D.J. Eliot is coordinating the defense and using a different scheme, Torneden will play the “Hawk” position, almost doubling as a defensive back and an outside linebacker, with his actions varying based on play calls and cues.

Torneden is as strong and proven a run-stopper as this defense has. And it looks like Eliot is putting the 5-foot-10, 192-pound senior in position to prosper.

You won’t hear that from Torneden, a humble defender who doesn’t seem to care much about the spotlight.

Try to get him to discuss what a boon playing the “Hawk” position could be for him, setting him up to make even more stops around and behind the line of scrimmage, and he’ll try to change the subject.

Torneden isn’t the type to boast about himself, but his versatility and instincts will be crucial for the defense this year.

Dating back to his time as a hard-hitting DB at Free State, Torneden always has enjoyed the run defense aspect of the game and operating closer to the line of scrimmage and the ball, because he’s a natural at sniffing out rushes and making tackles.

And with Joe Dineen graduated after leading KU and the Big 12 in tackles each of the past two seasons, look for Torneden to be the Jayhawk racking up stops this year.

He wasn’t too far off from 100 total tackles as a junior and reaching that benchmark is “definitely” one goal he’s chasing.

Still, Torneden genuinely is even more invested in helping the team.

“I came here for one reason, and that’s to turn this program around, hopefully go to a bowl game,” Torneden said. “So whatever I need to do, I’m gonna be that guy to step up an provide for the team.”

As much as I would love for Torneden and others to reach those milestones I’m still hoping the number of tackles decreases for everyone simply because we’re making stops and getting off the field in fewer plays.

Even better would be to compound that with fewer debilitating penalties and more third down conversions that keeps our O on the field for more of the game.