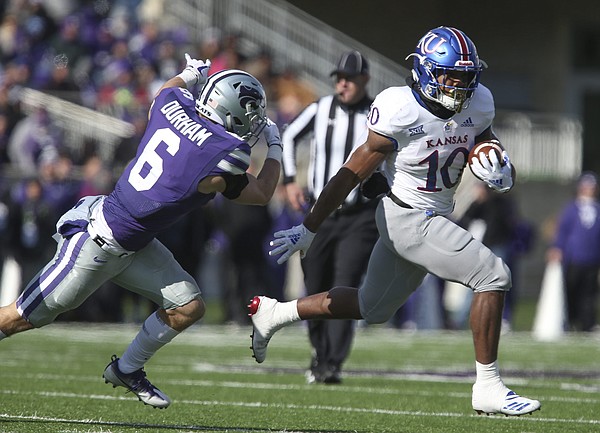 Kansas running back Khalil Herbert (10) leaves Kansas State defensive back Johnathan Durham (6) as he takes off up the field for a long run during the third quarter on Saturday, Nov. 10, 2018 at Bill Snyder Family Stadium in Manhattan, Kan. by Nick Krug

Dating back to early in his sophomore season, when he put together back-to-back massive rushing games, Khalil Herbert’s potential at running back has tantalized Kansas football fans.

On the best days of his first three seasons, Herbert has registered:

But for most of the previous three years, his carries on a game to game basis have been limited — especially for a player who enters his senior year averaging 4.9 yards per carry in 31 career games.

Herbert, a 5-foot-9, 205-pound rusher from Coral Springs, Fla., still won’t be KU’s featured back this year — that job will belong to Pooka Williams once the sophomore returns to the lineup in Week 2, after serving his one-game suspension as part of his punishment for a domestic battery charge.

Still, it wouldn’t be too surprising if Herbert becomes a fixture of KU’s offense as a primary backup. Last year, as a junior, he carried the ball 113 times for 499 yards and five touchdowns. But he could conceivably outperform all of those numbers this year if the offense relies as heavily on its running backs as it seems the Jayhawks will.

“I can’t imagine that Herbert won’t be a guy that vies for playing time,” head coach Les Miles said. “Being the solid guy that he is, he anticipates an agile cut well before many. And can bounce into a cut and out of a cut in a heartbeat.”

At times the past couple of years, Herbert seemed like a bit of an afterthought for KU’s offense for some reason, despite his flashes. It doesn’t look like that will be the case now that Miles is in charge, and has Les Koenning coordinating the offense.

“Today I saw him run in between a blocker and a defender — like in between them,” Miles told reporters earlier this week, following a KU preseason practice. “The blocker and defender were in contact. And he ran in between them. And I’m just saying, guys that have that kind of vision will play on Sundays. I think he’s going to be pretty special.”

Those words won’t soon be lost on Herbert, who has one year of college football left.

“It means the world that he believes in me, just being able to play at the next level. But I just take it as I have more work to do and keep working,” Herbert said. “It’s a childhood dream and it’s right there, so I just have to do my job. Do what I’m coached to do and I think it will be possible.”

Before his final season at KU is completed, Herbert, like many seniors before him, would like to help the program bust out of its losing rut. He said his goals for 2019 include: winning, going to a bowl game and leading the Big 12 in rushing.

Those are all lofty and may prove unattainable. But Herbert should be the best version of himself that KU has seen so far. And the senior running back said he has improved aspects of his game since the end of last year, too.

“I feel like my blocking and just running through tackles, running hard, breaking tackles,” Herbert said of ways in which he is more effective now. “That’s something I’ve really tried to work on and feel like I’ve done.”

Made me think of Billy Campfield, ok college career , and commendable Pro Career.

They way KU can sneak out a few unexpected wins (over/under for season is 3 win) is to shorten the game by controling the ball. With these 3 outstanding running backs and an unproven passing game (will hold judgement until the Big 12 season), KU's best offense could be run first and short a passing game dependent on speed - generate RAC (run after catch).

Khalil’s presence makes me worry much less about being Pookha-less in game one. That game that KH had against WVU shows exactly what he’s capable of doing against solid competition. I am really hoping to see the team come out and run downhill against Indiana State on Saturday. Punishing, tough football. And then sting them over-the-top. Can’t wait for kickoff.