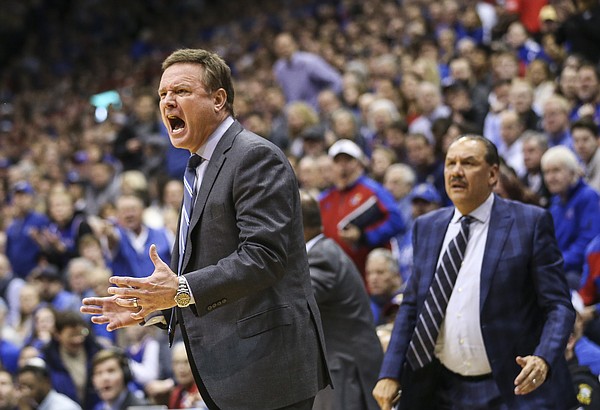 Kansas head coach Bill Self disputes a charging call against Kansas guard Devon Dotson (11) during the second half, Wednesday, Jan. 2, 2019 at Allen Fieldhouse. by Nick Krug

From the time that it became clear to those who obsess over Kansas basketball that Bill Self was indeed the longterm answer for the program and a more than suitable replacement for Roy Williams, who left KU for North Carolina, those among the fan base prone to worrying about these types of things began fretting about which basketball team would one day lure Self away from Lawrence.

At some point, they figured, head coach Gregg Popovich would leave the Spurs. And when that happened, the premise went, why wouldn’t Buford call up his old pal, Bill Self?

Through the years, fodder for such speculation grew. Self and Buford are close enough that R.C.’s son, Chase, joined the KU basketball team as a walk-on. After Bill’s son, Tyler, graduated from Kansas, he took an entry level job in the Spurs’ basketball operations office.

Yet, here we are, 16 years after Self took over the KU basketball program, and he’s still in Lawrence and Popovich remains in San Antonio.

Even so, this offseason was one that had to be circled on the calendars of the most paranoid KU basketball supporters, because Popovich's $11 million a year contract with San Antonio would expire at the conclusion of the 2018-19 season.

Throw in recent rumors of Self being a candidate for the Chicago Bulls’ job — as if Self doesn’t know Fred Holberg well enough to know to avoid that franchise; and, by the way, the Bulls signed Hoiberg's replacement, Jim Boylen, to a contract extension in January — and theorists might have even more reasons to worry about Self leaving for San Antonio, because the 70-year-old Popovich, hypothetically, could decide to retire.

If Self shooting down NBA rumors earlier this month and declaring his intentions to not only coach the Jayhawks next season, but also “hopefully” begin negotiating an extension of his contract, which expires following the 2021-22 season, didn’t do the trick for the Self to San Antonio worry warts out there, maybe this will.

We don’t know yet how long Popovich's new deal will last with the Spurs, so perhaps these developments only kick the Self as Pop’s replacement suspicions down the road a few years.

But here’s another hunch. Self won’t be the next coach in San Antonio.

The Spurs, unlike many NBA organizations, emphasize system and culture, because that’s what Popovich, head coach and president of the team, has put in place.

Popovich is to the Spurs what Dean Smith was to UNC and what Mike Krzyzewski is to Duke.

So when Popovich eventually decides to leave behind the franchise that is as synonymous with his name and face as it is with Tim Duncan’s, you can bet that Buford will ask Popovich for advice in finding the first new Spurs head coach since the 1996-97 season.

And when that day comes, here’s my hypothesis of how it will play out: it shouldn’t surprise anyone if Popovich helps pave the way for some NBA history by recommending the Spurs become the first team to hire a female head coach, San Antonio assistant Becky Hammon.

Self needs to figure out a way to not get his ass kicked for the next four years by TTU. His window at San Antonio never opened and is permanently closed, and his reputation has a heavy tarnish.

Here we are again, scrambling around and begging one-year-non-wonders to grace us with their presence for 5 months. And if you can avoid hitting any women for 150 days, that would be great. A real bonus for the program!

I'd actually beg San Antonio to do us all a favor and clear the stench out of this program by hiring the primary Stenchmeister. Those of you who are stupid enough to think that Self is a candidate for any job might also be looking for Larry Bird to walk through that door.

Man, you're sounding more like Fred from phog.net more and more.

It might be time to take your meds dude.

BMcCoob . . . Occasionally, when a church was abandoned and many years passed without the bell being rung, bats would eventually come and inhabit the belfry. So, when somebody said that an individual had "bats in the belfry" it meant that there was "nothing going on upstairs" (as in your brain, or lack thereof).

It's hard to imagine that there was ever anything positive enough in BM's life that HCBS could have somehow altered to make him this deranged and bitter.

Just a wild guess but Coach Self won't be getting a Xmas card from Brett anytime soon.

Comedy at its finest. A first sentence everyone can probably agree with and then a surreal rant leaving me in stitches. I mean, really. I enjoyed this. Even the parts that made no sense. Thank you.

Oh my!! Be prepared folks, when Brett gets hammered like this, for a post that probably took him a good 25 mins to articulate, he has a tendency to get a major case of red arse - singling out each responder.

you've got balls, Brett! I like the first sentence, but the rest is just too funny. That's all I can say.. LOL

Sometimes I have to Google your name to remind myself that you're not a teenager.

Why are you even bringing this up? You just give more life to the Self's leaving crew. Just ignore it.

San Antonio can have him.

I have it on good authority that Coach Self is about to accept the head coach job for swimming at Elizabeth City State. Either that, or Midvale Jr. High's senior Glee Club advisor.

Looks like the number of Kentucky and Missouri alumni are multiplying on this site.

At this point I think they would want us to keep Self. He has mismanaged talent for at least 3 years. And this investigation put our program back 2 years. So if Self wants to go then let him.

How are your Kentucky Wildcats doing? Do they not have a page that you can spend time on?

I don't think Kentucky fans really care about us right now. They are more concerned about Duke and NC and even Texas Tech at this point.

The degree and alumni dues I paid for would say otherwise. I doubt you even graduated from the University.

M'Zoo alums would want Kansas to "suffer" with more of that?

Mizzou KU rivalry is dead. Aside from K-Suck we have no rival. I could see K-Suck fans on here but not Mizzou or Kentucky.

....you're the one that said they'd want KU to keep Self. You're either the dumbest Chicken Little or the worst troll....

What you said does not make any sense.

Admitting that a conversation is over your head is brave. You have my sympathy.

@Ryan..Self in no way has "mismanaged" his talent..before this season he had KU in the E8 twice and FF...he has done an amazing job with the talent..and IF you graduated from KU (doubt it) you certainly ARENT a REAL fan....better you go to someone elses board

I do want to thank Mr. McCabe for providing a spark of provocative opinion to help spice up a rather slow news day so far.

The interesting thing is someone agrees with him. Mr.Mullen could you further elaborate your stated position on the status of Mr. William Self, sir? Brett has at least provided his take on HCBS's shortcomings. I would be very interested in hearing your perspective.

As much as it always seems wrong to correct the esteemed Mr. Bandle....I humbly submit that HCBS legal name is actually Billy Eugene Self Jr.

It was William, but his dad changed it to Billy - he likes things just straight to the point.

I think he is guilty of paying recruits. Maybe not him but he had something to do with it. I think he pretty much bagged it in this year, as we saw no development from any player. I believe these players could see this as well. It was an absolute cloud over our season. It's time to move on.

Ryan....fair enough. I appreciate your response though I disagree.

Certainly, overall team development was not up to par but to say none and no one...come on. Dotson, the KC Kid, Big Mac didn't grow even a little? Mitch was exactly the same as last year? Garrett didn't show any offensive improvement whatsoever? KJ did nothing?

As far as bagging the season, a game away from the Sweet Sixteen with a decimated crew full of freshmen isn't exactly what I would call a choke job.

I guess we will just agree to disagree.

He started 3 McDonalds all Americans. I wouldnt say his team was decimated. I honestly didnt think it was possible for a player to get worse as the season progressed. But then I watched Grimes play. That is on Self. Plus I didnt see significant improvement from Dotson, and Lawson just is what he has always been. Self has always had great recruits that will get him or any coach far in the tournament. I am looking for real improvement from our one and dones and he never delivers.

Lawson shot horribly from deep the first half of the year and 50% the second half, that's certainly improvement.

Dotson's stats grew tremendously after the first 12 games or so, also improvement.

DMac was much better at the end of the year than he was at the start.

Grimes was checked out before he ever arrived, I don't think there was any way to get through to him, just like his horrendous choice to try to get drafted and having no backup plan.

Do I need to continue?

I said significant improvement. Dotson did not improve that much. And DMac regressed again toward the end of the year.

Are you really that clueless or are you just bad at trolling? No basketball scout on earth would agree with those two assessments.

Brad Stevens and Billy Donovan are still coaching but most college coaches who have jumped to the NBA have failed. I don’t see it happening.