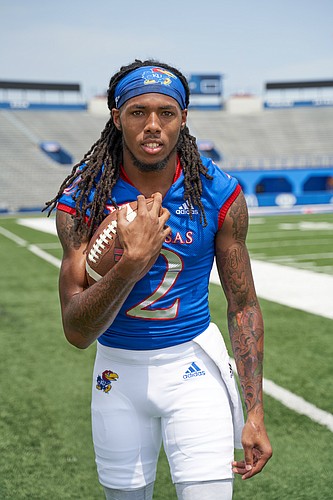 The closer the Kansas football team gets to its season opener, the more likely it seems fans who show up Sept. 1 at David Booth Kansas Memorial Stadium will get ample opportunities to watch freshman Corione Harris.

One of the most eagerly anticipated debuts in the program’s recent memory might kick off with Harris, a four-star cornerback from Louisiana, on the bench as a reserve. But the way his teammates and coaches speak about the young defensive back who turned down scholarship offers from Mississippi State, Florida, LSU and many other programs, it sounds as though Harris’ talents are too considerable to leave unutilized on the bench for long.

Less than two weeks into preseason camp, KU coaches haven’t yet published or discussed publicly any sort of depth chart. So whether Harris starts or enters as a substitute versus Nicholls State in week one isn’t exactly concrete at this juncture.

The group’s position coach, defensive coordinator Clint Bowen, likes Harris’ ability and potential, but he doesn’t broach the subject without quickly pointing out the first-year corner’s flaws, as well.

“He’s a talented kid. He’s got a long, rangy body. He has a good skillset. He’s a competitive, high-energy guy. He has tools,” Bowen began. “There’s techniques that need to be mastered and some fine-tuning. He’s not there yet; he’s not even close right now in terms of do it perfect every down mentality. But in terms of the skillset, he has it.”

What’s more, the man who will determine how much Harris plays in his first season as a Jayhawk thinks cornerback is a position where “God-given” talent factors more into a young player’s chances to succeed than his current stage of physical development.

At least for now, no one on KU’s staff wants to go on record anointing Harris, who goes by “Coe,” as a can’t-miss thoroughbred. However, when asked how realistic it would be to expect a freshman to come in and play cornerback effectively, Bowen didn’t come across as a coach ready to keep Harris off the field until he matures.

“At corner, it’s realistic. Because it’s not a position where your physical strength and physical development’s going to get tested,” Bowen said. “The things that are going to get tested are how quick your feet are and can you run. You can either do that or not. The difference between being 180 (pounds) and 200 at that position, who really cares? You’re not going to get tested physically like that. Whereas, at those big-body positions, a grown man at 21 that has some ungodly strength, I don’t care what you do, if you’re underdeveloped, he’s going to win.” 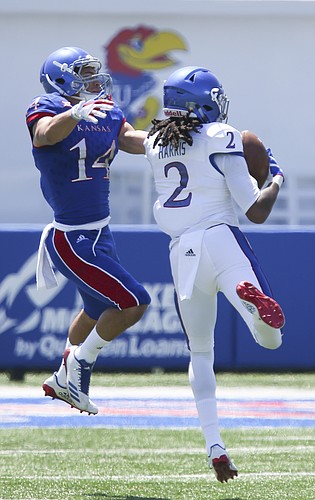 Per KU football policy, freshmen are not allowed to do interviews. But the more experienced Jayhawks who will play alongside Harris in the coming months don’t mind talking up the touted freshman’s qualities or pondering his potential as a playmaker in the secondary this fall.

“He’s a stud, man,” redshirt senior linebacker Joe Dineen said. “He’s really raw. Talentwise, it’s all there for him. Sometimes the technique, just as a freshman, gets a little off. But he’s as good as I’ve seen coming in new.”

Dineen went on to predict “big-time minutes” for the Louisiana native this season, and the linebacker, like many KU fans, is excited to see what Harris can do.

Junior safety Mike Lee, a graduate of Landry-Walker High, just like Harris, knows the freshman as well as anyone in the program. Lee, who attended Harris’ signing ceremony in New Orleans this past December, thinks his former prep teammate has adapted well since enrolling at KU this past January.

It’s likely to take at least a couple years for Harris to begin to reach his full potential at the college level. Even when miscalculations inevitably pop up for him as a freshman, though, his older teammates think he has the ideal temperament to survive them and keep on developing.

“Corione, he just has that demeanor,” junior cornerback Defense said. “Like I tell everyone, corner’s all about confidence. He has that mentality that, ‘if I did get caught on one play, I’m going to come back on the next play with the same energy, same enthusiasm.’”

Harris will need to take that approach with him into every snap this season, Defense added, in order to make it as a Big 12 cornerback. And the junior figures the freshman will.

“He definitely has that,” Defense said of the psyche required to thrive, “so that’s a big plus for him.”

The Key Question is Will the Rookie "Coe" Bring Clint Bowen "Woe"?

My Ouija Board Predicts KU in a Nickel Package versus Nicholls State.

KU Played a Nickel Secondary Most of the Time in 2017.

Bowen is the king of great quotes. “Donkeys don’t win the Kentucky Derby."

Anyone remember his quote when he was appointed interim coach? This might not be exactly accurate, but I think it was: "Anyone who sees this job as a stepping stone is an idiot."

I know a lot of you hate him, but that's too bad. Bowen is a favorite in my book.

Whenever the next head coach is hired, if I were him, I'd ask Bowen if he'd be willing to take the pay cut to stay at KU as a position coach because he's very good in that role. If the answer's no, let him move on to his next job and find another DB coach.