Aggies ready to dismiss history, hope to get shot at upsetting No. 1 seed Kansas 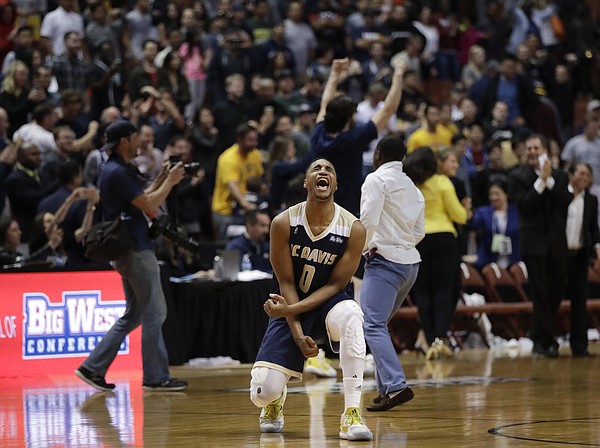 March was made for madness. And upsets. And history. Just ask the basketball players at UC-Davis.

Before the Aggies get a chance at shocking the world, they will have to get past North Carolina Central in the First Four, in Dayton, Ohio, Wednesday night.

But, because the NCAA Tournament is beloved in this country and media outlets want juicy storylines, a few of UC-Davis’ top players already have pondered the idea of knocking off one of the field’s goliaths, Kansas, in Tulsa, Okla., on Friday night.

A reporter in Dayton, Ohio, site of the First Four, asked UC-Davis seniors Brynton Lemar and Darius Graham and junior Chima Moneke about the history of futility among 16 seeds in the tournament’s history.

How do players, fully aware No. 1 seeds are undefeated all-time versus 16 seeds, generate belief when every team in their position before them has failed?

“Well, I believe in our team,” began Lemar, a 6-foot-4 guard from San Diego. “We've been playing with each other since Costa Rica, since this summer. And I believe that we can upset hopefully the No. 1 seed.”

You can’t knock a college player for saying he wants to be a part of something historic. Lemar, as most anyone in his position would be, is confident in his Aggies (22-12).

“And I don't think any team's going to go and just try and just be happy to be here,” Lemar said. “They want to win. That's our whole goal, too. We want to win. We're excited to be in this position but at the end of the day we're still competitors.”

Jumping in where his teammate left off, Graham said the Aggies have an underdog nature about them that they hope will show on the court this March.

“A lot of us have been looked over our whole lives and everything,” said Graham, from Sacramento, Calif. “So to be able to be in this position, first, to play North Carolina Central and then to hopefully to play No. 1 Kansas, it's very rewarding. We're excited for it.”

To the senior’s credit, he kind of likes the numbers surrounding 16 seeds in the tourney. They’re 0-128.

“I like math a little bit, so the law of averages says that you're bound to possibly beat a No. 1 seed, especially since it hasn't happened yet,” Graham offered. “So we're going out here, like Brynton said, since the beginning of the season we've harped on defense and letting our defense take care of everything else, having each other's back and playing as a team in a tournament like this on any given night the best team will win.”

Of course, the eye test says the Midwest’s No. 1 seed, the Jayhawks (28-4), are the best team in a 1-versus-16 seed scenario, whether that be UC-Davis or NCCU (25-8). But, it is March, and a player has the right to defend his team’s chances, regardless of how steep.

“So in order to answer your question, you know, anything is possible,” Graham said. “We weren't supposed to be here. And we're here. So why not us?”

These players on teams seeded 16th have to believe in themselves or else what’s the point of stepping onto the NCAA Tournament stage.

“Any team is beatable, for sure,” said 6-foot-6 forward Moneke, a native of Australia. “We knew coming in that every team is a great team. At the same time we're here, too. So we deserve some respect for what we've done. And at the same time we respect NC Central first. Hopefully we'll take care of them. And if we get on to Kansas we'll respect them, but we won't fear anybody.”

Already looking past tonights game. They won't even have a chance to play KU

The law of averages doesn't apply to this situation, bc the #16 seed would have to win what 50 times to balance out and that's simply not going to happen. When a team is just exponentially superior to the other in every category then the law of common sense says they're going to win

They're talking trash and haven't even played the first game to even get to KU. Idiots.

Doesn't sound like trash talk to me. Sounds more like confidence and a desire to do what's never been done before.

For my part I don't care who wins this game as long as we take care of business against them on Friday. If we should inexplicably lose that Round of 64 game, it would see the KU program back thirty years.

They lose by 15 or more to NC Central. NC Central is a solid team.