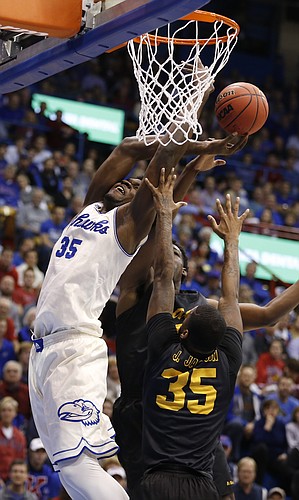 Kansas center Udoka Azubuike (35) fights for position inside during the first half, Tuesday, Nov. 29, 2016 at Allen Fieldhouse. by Nick Krug

After all, the Jayhawks already had put the 49ers away by halftime, long before starting center Udoka Azubuike or sophomore power forward Carlton Bragg put the basketball through the hoop in a 91-61 rout.

For years, Self’s teams have relied upon a low-post scoring threat to facilitate the offense — from Wayne Simien, to Thomas Robinson, to Joel Embiid. Seven games into this season, though, the coach doesn’t think that traditional approach will work for his Jayhawks (6-1).

“We scored 48 points the first half and our big guys combined for one,” Self marveled after the victory, referencing Udoka Azubuike’s single made foul shot during the first 20 minutes. “And we had to bank in that one from the free-throw line to get one. So obviously you’re not gonna win consistently against good teams relyin' on makin’ three-point shots all the time, because there’s gonna be times where you don’t make ’em.”

Self expected much more out of his big men against Long Beach State, but utilized a four-guard approach often on a night KU shot 14-for-26 from three-point range and frontcourt players accounted for just 18 of the team’s 91 points.

The coach conceded Long Beach State (1-8) played a “kind of funky” matchup zone that the Jayhawks didn’t prepare much for and that kept the offense out of rhythm. Self also said Landen Lucas (oblique strain) missing the game hampered the team’s inside play, as did Bragg picking up two fouls in the first half, when the sophomore got on the floor for all of one minute.

But when Self looked at the box score and saw the following numbers from his big men, it just translated into disappointment.

Considering Azubuike had dunked his way to 17 points four days earlier against UNC Asheville, Self demanded more from the freshman 7-footer, calling him “no factor” against LBSU.

The coach proceeded to present his wish list for the Kansas bigs moving forward.

“At least a big can block a shot. We get no blocked shots tonight. I think the bigs can rebound better and I think that we can score with angles better, and certainly we can shoot our free throws better,” Self said. “But we’re not gonna be a team that scores 20 points out of the post this year. I don’t think that’s gonna be the case.” 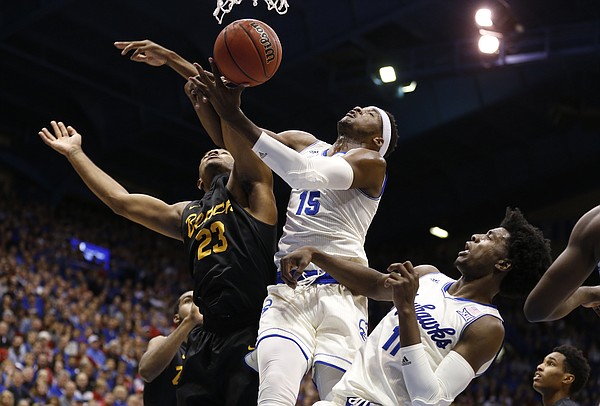 KU veteran Devonté Graham understands his coach’s frustrations. But the junior guard said this Self team, even when it has four guards on the floor, won’t completely abandon its interior players as an offensive option.

“We still got that same mentality, though. Coach always tellin' us to play inside-out,” Graham said. “But I just think tonight we shot the ball real well, so we was just trying to be aggressive — kept attacking, kept shooting and making shots.”

Plus, Graham pointed out, LBSU set up its defense to pack in and try to take away points in the paint (though KU still scored 36 of those), almost inviting Kansas to shoot 3-pointers instead.

Obviously KU won’t see the same kind of defense every night if its guards keep burying open looks from downtown. And then the burden to score will increase for the team’s bigs. What’s more, Graham doesn’t think the Kansas post players will let their woes persist, even after a disappointing night.

“They’re doin’ real well with it,” Graham said. “They’ve been goin’ hard at each other in practice. So they’re gettin' better. They havin' that little slump, but I think definitely Carlton and Landen and ’Dok are doin’ a great job of gettin' through it.”

Typical for Self to diminish the efforts of the 'bigs' when his pet golden boy Landon Lucas isn't able to play. Much of the reason for the guards shooting success in this game was the fact that the 'bigs' that DID play weren't loafing like Landon Lucas does. Passing was crisp, the pace was quicker...hence.....guards were open to knock down shots. Not the case when Lucas is in the game.....dragging the pace of the game down so no one is open.