Svi Mykhailiuk determined to contribute more than 3-pointers for Kansas 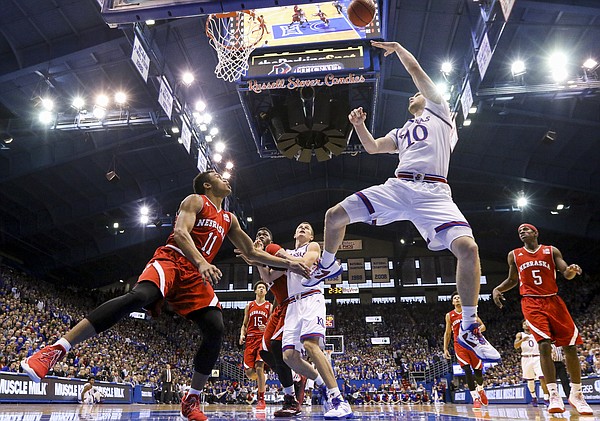 Sure, when the name Svi Mykhailiuk comes up, the first thing that comes to mind might be his long-distance shooting — after all, his shortened first name conveniently rhymes with “three.” But the junior wing from Ukraine wants more out of his basketball life at Kansas than hanging out behind the arc waiting to fire.

Saturday afternoon at Allen Fieldhouse, Mykhailiuk’s 2-for-4 shooting from long range in an 89-72 victory over Nebraska enhanced his numbers to 22-for-51 (43.1 percent) through 10 games. Still, the 6-foot-8 backup showed he’s capable of so much more in the midst of tying his season high with 15 points.

For one, Mykhailiuk looked assertive with the ball in his hands, whether that came off a turnover, in transition or as a driver in the half court.

“People just know me for shooting those three-point shots,” he said after Kansas improved to 9-1, “but I don’t think they expect me to drive the ball as much. So now I’m working on driving more.”

On his way to 13 first-half points, Mykhailiuk put in two layups and scored another basket from just outside the paint, near the left baseline while making five of his first eight shots before intermission. Even when it appeared he might be dribbling himself into trouble, the ever-improving 19-year old turned a dead end into a basket. His confidence seemingly improving by the week, Mykhailiuk transformed a one-on-three fast break into a layup by evading his defender with a Euro-step at the free-throw line, followed by a strong finish.

His final stat line included two assists, two steals, no turnovers and one block, as well. What’s more, Mykhailiuk didn’t get credit for another swat. In the second half, he slid over to help defensively from the weak side of the floor and smacked a layup attempt off the backboard before being whistled for goaltending. Replays proved Mykhailiuk thwarted the shot cleanly and legally.

Never one to praise himself or leave a game feeling like he did everything perfectly, though, Mykhailiuk downplayed improved defense as one of his qualities this season.

“I try to help more and we’ve been working in practices, but I’m not good in there now,” he said when asked about the goaltend (read as: block), which he met at the rim. “I think I’m gonna get better.”

To his credit, Mykhailiuk remembers his mistakes in floor positioning on defense as much as his highlight-reel buckets.

“That’s why at times I’m running to a long pass and I’ve got to close out (and not get beat),” Mykhailiuk said. “So I’ve gotta get better taking the right position.”

When those stops (that coach Bill Self agonizes over) come, offensively, KU’s four-guard lineups allow Mykhailiuk more freedom to make plays, especially in the open floor.

“Everybody can bring up the ball,” the junior guard said, “and whoever can get a rebound can bring it down and push ahead.” 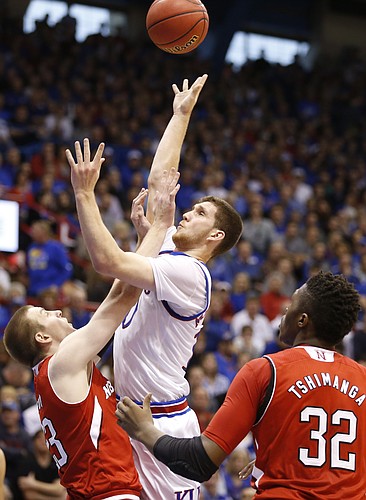 All of the Jayhawks’ perimeter players appear to be appreciating their chances to play a less traditional form of offense. Plus, Mykhailiuk, who said the players are improving in those situations, added using some four-player combination of himself, Frank Mason III, Devonté Graham, Josh Jackson and Lagerald Vick should make KU more versatile defensively, too.

“We are faster and we can switch with four guards,” Mykhailiuk explained. “We can trap the bigs. I think we feel pretty comfortable.”

Even so, he was the last Jayhawk who would claim everything is humming along euphorically. Mykhailiuk cost himself a third assist and drew the ire of his coach when on one second-half fast break against the Huskers (5-5), he lobbed a pass off the backboard for Jackson and the electric freshman missed a dunk off the back of the rim.

“Ah, Svi, come on,” Jackson said in the postgame press conference with a smile, when asked about the mishap. “You see, originally the plan was to just throw me the ball. I didn’t know it was goin’ off the backboard.”

Added Mykhailiuk: “I should’ve just thrown it to him. Regular pass.”

The junior won’t soon forget that mistake, nor will he attempt an unnecessarily difficult alley-oop feed under Self’s watch again. Mykhailiuk learns too well from his mistakes as he continues to grow as a player.

“I just try to help my team win and do whatever — if it’s drive the ball, shoot the ball, play defense,” he said, before turning to another self-critique which surely also qualifies as a Self-critique of his game. “I’ve gotta rebound the ball more,” Mykhailiuk added after a two-board effort, with both of his coming on the offensive end, “because I’m not really good at rebounding now. I need to be more aggressive on the boards.”

When’s the last time you heard a three-point specialist talk about boosting his toughness on the glass? “Svi for a rebound” isn’t as catchy as “Svi for three,” but the junior remains determined to do more.

Svi is long, quick and fast with really good hops. Great calm and reasoned demeanor while getting more and more in control of the games. It's a third year player getting extended minutes and showing he deserves them. How tough for opponents will Josh and Svi be after 10 more games of 25+ minutes. Mayhem and pain.