How does KU rank compared to other blue bloods in terms of playing fast offensively? 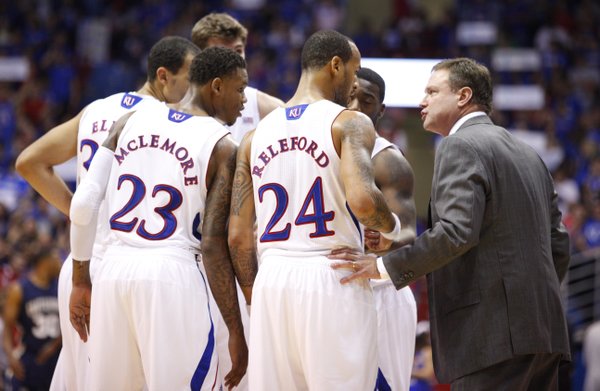 Until a few weeks ago, the best way for us to determine how fast a college basketball team played offensively was to look at the adjusted pace on KenPom.com.

There was a flaw in that, though. The goal of many teams is to play quick offensively (score in transition) and force other teams into bad shots on defense (resulting in longer possessions). With those teams, it would have been difficult to tell if a faster pace was caused by a run-and-gun offense or a defense that allowed quick shots.

It's become much easier recently. Last month, Ken Pomeroy posted a new statistic on his site: average possession length (APL) for both offense and defense. This new number is simple: Pomeroy says it "is not adjusted for competition and it measures the length of an entire possession, so offensive rebounds count."

Though Pomeroy says shooting the ball faster on offense has a weak correlation to scoring more points per possession (shooting faster generally means more transition shots, which are more successful because they're against an unset defense), what's more interesting is that now we can better determine a team's offensive style.

And to take it a step further, if a recruit wants to go to a school that "plays fast," we now have a better way to show exactly which schools do just that.

So let's say Recruit X is a top-10 prospect in the class of 2014, and he wants to go to a school that plays fast offensively. Which are his best choices?

(Note: To determine the "blue bloods," I took the six schools from this list and added in Syracuse and Michigan State, who have had plenty of recent success.) 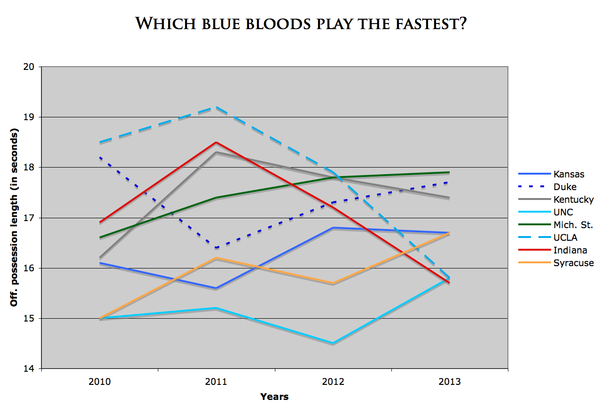 Not surprisingly, North Carolina plays the fastest of the top teams, ranking or tying for first in offensive APL in three of the last four seasons.

Though Syracuse has ranked in the top half of the NCAA in adjusted tempo just once in the last four years, it turns out that most of the reason for that was its tough-to-score-on matchup zone defense. In actuality, the Orange are one of the fastest-playing teams offensively in this list, ranking first (tie), third and second in the first three years of the study before dropping to a tie for fourth last year.

KU coach Bill Self also should have a good recruiting pitch if a recruit is looking to play fast. His team has played consistently fast offensively despite having teams that were better built to run (2010-11 with the Morris twins) and ones that might not have been (2009-10 with Cole Aldrich).

Some other interesting notes:

• Kentucky doesn't play as fast as I'd expect given the athletes that play there. The Wildcats usually are a good offensive rebounding team, which might be causing their offensive APLs to tick up a bit, but the possession times are still higher than expected. It still hasn't appeared to hurt UK's efficiency, as it has ranked in the top 15 in KenPom's adjusted offensive efficiency in three of the last four seasons.

• Indiana and UCLA both appear to have made concerted efforts to play faster offensively in the last two seasons. With IU, this also might be the "Cody Zeller" effect, as his ability to run the floor in transition made it beneficial to play a more up-tempo style. UCLA appears to have had some success speeding it up, as its adjusted offensive efficiency went from 79th nationally in 2011 to 72nd in 2012 and 38th in 2013.

• Duke and Michigan State were the two slowest-shooting teams a year ago, and Duke is the real surprise to me. MSU is known for a bit of a plodding style and also for being strong on the offensive glass (41st nationally).

Duke, though, was a terrible offensive rebounding team last year (270th nationally) and still was taking 17.7 seconds to shoot it each possession. As you'd expect, coach Mike Krzyzewski still knew what he was doing, as even with the slow pace, the Blue Devils had the fourth-most efficient offense in the nation. That's tough to do with limited scoring in transition.

Just for fun, I went ahead and graphed out the Big 12 teams and how they ranked the last four years. I didn't include West Virginia or TCU, who just joined the conference last season. 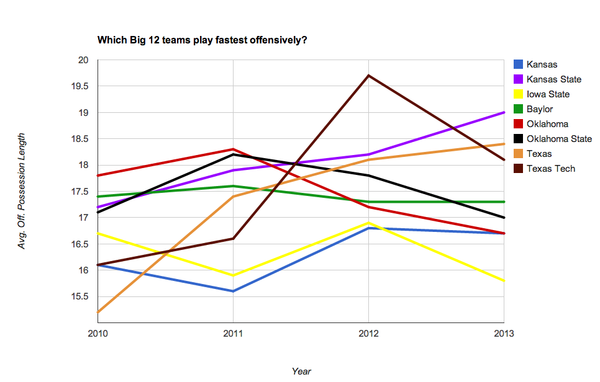 As you'd expect, KU plays one of the fastest tempos, though Iowa State is right with the Jayhawks and even passed them last season.

A few other notes:

It's also interesting to note the distinct change in offensive style since OU coach Lon Kruger took over for Jeff Capel after the 2011 season. The Sooners have drastically decreased their average offensive possession time, and their offense has improved every year, going from 136th in adjusted efficiency in 2011 to 127th in 2012 to 36th in 2013.

Also, do we think there's anything to NBA-style coaches having a preference to play faster offensively? Is it a coincidence that the coaches with the most NBA background in the Big 12 (Kruger, ISU's Fred Hoiberg) have ranked in the top three with KU in offensive APL the last two seasons? Might be something to watch in future years.

• Texas has gone from playing extremely fast to extremely slow. The Longhorns still top-35 offenses in 2011 and 2012 before bottoming out last year (161st). Getting a few more easy buckets certainly couldn't hurt a UT team that had severe shooting and turnover issues a year ago.

• Kansas State appears to be one of the teams that is able to succeed offensively with longer possessions. You'd have to think the Wildcats' recent success on the offensive glass is a big reason their possession times have been among the longest in the league.

Let's get back to Recruit X. If he's wanting to play fast offensively, North Carolina should immediately be on his list, as should Syracuse and even KU. Indiana and UCLA have shown recent tendencies to play faster, while Duke, Kentucky and Michigan State have had a tendency to slow down their offensive tempos.

If he's only looking to the Big 12, then KU and Iowa State would be the top choices, with Kruger quickly catching up in his two years at OU.

Thank you for thinking outside of the box. Your work is truly sensational.

What else does he have to do, he writes about KU basketball. :)

Self at Illinois also ended Roy's season in 2001 I believe in the Sweet 16.

U make a good point, but how can anyone deny Roy's success with the hi-tempo style? One could argue aside from the head to head unc ku matchups that Roy is far more successful than Bill, although I don't think he's 'better'. Dean Smith also was extremely successful using that style.

I hear ha ralster, but Roy does have 2 National Championships in the past 10 years. His time may be almost done now (I know several UNC alum who want him to go), but it's hard to discount winning the big one 20% of his time at UNC.

To be fair, in 2012 UNC had lost their point guard, I forget his name (Marshall?), who had made that team go that year. Of course we don't know how that would have turned out, but it was a pretty tight game without him.

I do like what you wrote though. It's generally true in most major sports. Baseball teams win World Series when their pitching goes strong. Defenses win Super Bowls.

Seriously? How can you have Syracuse, IU, and Mich. St. in this comparison and not include Louisville? That's just silly. Louisville has 2 more Final Fours than IU or Mich. St. and twice as many as Syracuse. They have more National Championships than Syracuse and Mich. St. Next time, compare ACTUAL "blue bloods" - not arbitrarily chosen ones. Thanks.

Hey CardsFan — Thanks for the feedback. A Louisville fan on Twitter earlier asked politely if I could add the Cardinals to the graph, so I went ahead and made up a new graph for him. I'll post it here in case you're interested. 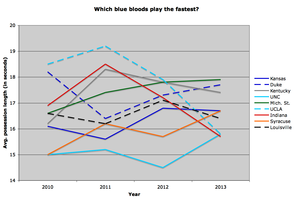 Graph with Louisville by Jesse Newell

You could have just called CardsFan a troll but it looks like you took the high road.

It's not being a troll to bring up a relevant and factual point. But thanks for playing.

It's not being a troll to have a bad attitude when asking a reasonable question.

Cool! Thanks for taking the time to do that. It's an interesting comparison.

Jesse, I'm a bit color-challenged and I'd bet some other readers are, too, especially males. It would be helpful to me if you could in the future put the team names on or right up next to the appropriate line on the graph. Or use arrows. Anything besides just color to tell which line is for which team. Sorry. And thanks.

There are a few of us, tho from an xls geek, the names on the chart isn't nearly as straightforward an seamless in all presentations.

Any offense could be quick if the guy who rebounds the ball, is the one who gets to dribble it down court and shoot it....

An outlet pass is still quicker than anyone running with the ball. I thought that was a strength of Cole, and a strong reason why his teams would have been good transition teams regardless of whether he was going to run the court as quickly as his teammates.

Jesse - Do you have the raw data; # of possessions in particular. It would be really easy to adjust out the influence of the OR by simply adding each as an additional possession. Many times the second shot won't take as long as the first, but it would still seem better than penalizing a team for being good on the glass. Not that you decided to do the latter, but would be a way you could offer even more advanced stats than KenPom, which is saying plenty. Thanks for geeking.

Translation: teams tend to transition more and push it up the floor more, when they play larger rotations and don't have to worry about fatigue and fouling so much.

Not surprised that coaches with NBA experience would have a quicker offense. The nature of working with the 24 second shot clock is going to have them design their offense to get something within the first 8-12 seconds on just about every possession, so that the rest comes with 10-12 seconds still on the shot clock.

I find the styles of different teams interesting. Kentucky playing a little bit slower than some of the other blue bloods didn't shock me, because they have gotten a fair amount of offense on post ups from guys like Cousins, Jones, Davis, etc. That offsets their transition. I think the fact that many teams don't crash the offensive glass against UK affects their ability to get into transition off misses.

I am not surprised that KU gets out to a good pace offensively. KU runs very well off misses, and has always created a decent number of turnovers. I'd say in that respect their style is very similar to Louisville (although it is achieved in different ways), so it makes sense that KU and Louisville run almost parallel to each other.

I'd be interested to see a follow up with defense for those teams to see who allows quick shots. My guess would be that UNC and IU give up quicker shots while KU, UK and Mich St make teams use more of their shot clock.

I look forward to all of your posts. They are informative, well researched and insightful.

You do excellent work.

For an information starved Jayhawk living in Virginia, this is pure gold.