All statistics courtesy of KenPom.com and are current as of March 30. 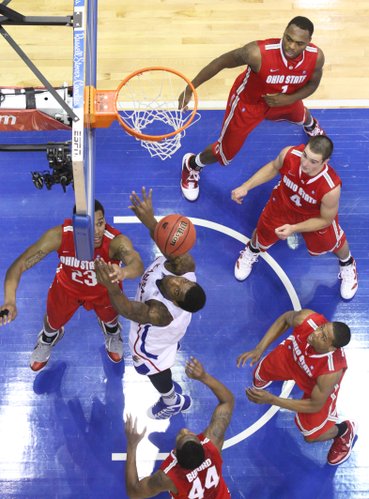 Kansas forward Thomas Robinson fights for an offensive rebound against the Ohio State defense during the second half on Saturday, Dec. 10, 2011 at Allen Fieldhouse. by Nick Krug

In terms of balance offensively and defensively, there's been no NCAA team better this year than Ohio State.

The Buckeyes rank second in adjusted defensive efficiency and seventh in offensive adjusted efficiency — the only team in the nation to be ranked in the top 10 in both.

Defensively, Ohio State is one of the best in the country at limiting second-chance points. The Buckeyes grab 75 of the available defensive rebounds (second nationally) while also thriving in almost every other statistic.

Ohio State forces lots of turnovers (22 percent of possessions, 60th nationally) and also makes it tough inside, where opponents shoot just 45 percent (63rd nationally). Coach Thad Matta also stresses playing defense without fouling, and that shows up in the stats, as the Buckeyes allow just 15.4 free throws per game while playing the nation's 69th-fastest pace.

Kansas center Jeff Withey (5) and forward Kevin Young (40) battle for a loose ball with Ohio State forward Deshaun Thomas during the second half on Saturday, Dec. 10, 2011 at Allen Fieldhouse. by Nick Krug

Ohio State's biggest weakness is three-point shooting ... but even that is deceptive.

The Buckeyes have made just 33 percent of their three-pointers this year (223rd nationally), yet each of their five starters are shooting at least 34 percent from three.

This statistic is only possible because Ohio State's bench has been awful from three-point range. If you combine the Buckeyes' eight bench players, they've made just 18 of 92 threes this year (20 percent).

So if you see someone at the scorer's table for the Buckeyes, odds are he's not a threat to hit a three.

Defensively, Ohio State also isn't as strong at defending the three as it is in other areas. Opponents have made 33 percent of their threes this year (87th nationally), but perhaps the more frightening number for the Buckeyes are the high number of three-point attempts they allow. 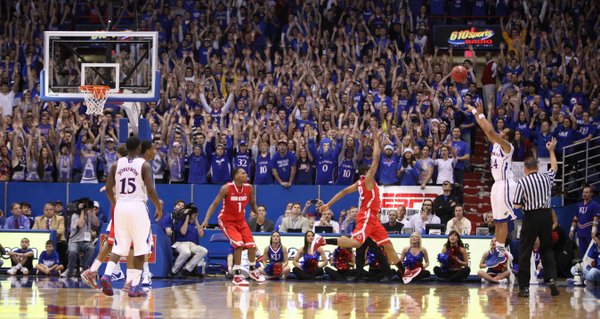 Kansas guard Travis Releford puts up a three from the corner against Ohio State during the second half on Saturday, Dec. 10, 2011 at Allen Fieldhouse. by Nick Krug

KU isn't a great three-point shooting team, but the numbers suggest that the Jayhawks should have opportunities for open shots from the outside if they want to try their luck.

Like KU, Ohio State also has a very limited bench. Just 24 percent of the Buckeyes' minutes come from their bench (303rd nationally), which is only slightly higher than KU's numbers (23 percent, 309th nationally).

Six-foot-9 forward Jared Sullinger is one of the best players in the country, ranking third in KenPom's player-of-the-year ranking (behind only Michigan State's Draymond Green and Kansas' Thomas Robinson). 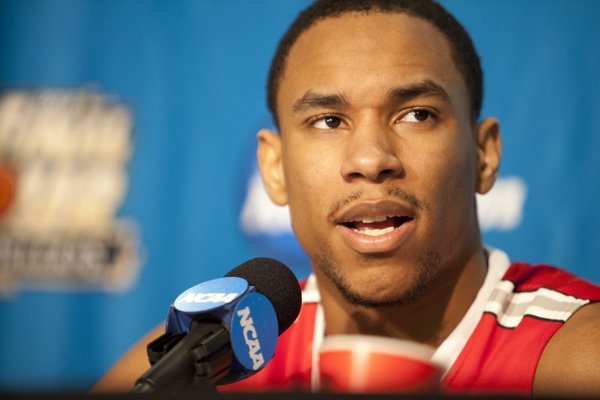 Ohio State forward Jared Sullinger talks about his regret for not playing the Jayhawks at Allen Fieldhouse when the two teams met earlier this year, Thursday, March 29, 2012. by Nick Krug

He's no slouch as an on-ball defender, either, blocking 4 percent of opponents' two-point attempts (296th nationally).

Deshaun Thomas is Ohio State's next-best offensive weapon and shoots it nearly as much as Sullinger (taking 26.5 percent of his team's shots when he's in compared to Sullinger's 27.3 percent). The 6-7 forward Thomas can stretch the defense and is a great shooter, making 61 percent of his twos (191 of 315), 36 percent of his threes (49 of 138) and 74 percent of his free throws (81 of 109). He also has an extremely low turnover rate, giving it away on just 10 percent of the possessions he ends (37th nationally). He likes to get to the offensive glass as well, grabbing 10 percent of the available caroms on that end (348th nationally). In this year's NCAA Tournament, Thomas has averaged 22 points and nine rebounds per game.

Six-foot-6 sophomore William Buford also shoots a lot of shots (26.2 percent of team's attempts), but he's much less efficient than Sullinger and Thomas. Part of that is because he's more turnover-prone, and part of it is that his two-point percentage — at 45 percent (140 of 311) — is about three percent lower than the NCAA average. Buford can shoot well elsewhere, making 35 percent of his threes (59 of 168) and 83 percent of his free throws (90 of 109).

Point guard Aaron Craft isn't a huge contributor offensively, but he might be the best defensive player in the nation.

KU coach Bill Self has said the 6-2 guard has the best hands defensively in college basketball, and that shows up statistically, as he grabs a steal on five percent of the defensive possessions he's in (12th nationally). His defensive impact is probably even greater than that, as his pesky nature oftentimes forces illegal screen calls or creates steals that he isn't given credit for in the box score. Offensively, Craft is a distributor, dishing out 25 percent of his team's assists while he's in the game (235 nationally). Though he only shoots 13 percent of his team's shots while he's in, that doesn't mean teams can go without guarding him, as he's made 57 percent of his twos (90 of 158) and 34 percent of his threes (21 of 61) this year.

Much like the North Carolina game, KU will face a team in Ohio State that gets almost all its scoring from two-pointers (59 percent, 18th nationally). This would normally be an advantage for KU, which boasts the nation's best two-point percentage defense (40 percent).

The problem for KU is this is the matchup that has given it the most troubles defensively this year, as Ohio State plays a "stretch 4" in Thomas — the same type of player that Thomas Robinson has struggled guarding all year.

If Robinson can't handle Thomas (and he couldn't in the teams' first game in Lawrence in December; Kevin Young was switched to him in the second half), the whole lineup for KU starts to disintegrate. 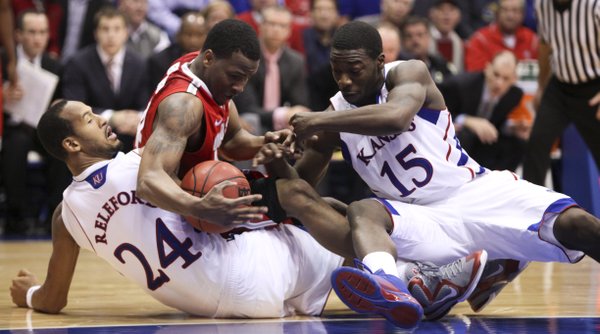 Kansas players Travis Releford and Elijah Johnson get tied up with Ohio State guard William Buford during the second half on Saturday, Dec. 10, 2011 at Allen Fieldhouse. by Nick Krug

Playing a Triangle-and-2 will be difficult when Ohio State has its starters on the floor, as the defense requires one awful outside shooter to be out there, and each of the Buckeyes' starting five can hit a three if left open.

It should all make for an interesting chess match between Self and Ohio State coach Thad Matta. Basically, though, everything becomes much easier for KU if Robinson is somehow able to stay on Thomas to allow KU to keep the rest of its defensive matchups.

Beyond that, it will be important for Withey to stay out of foul trouble, as KU has no other great options for Sullinger should Withey be forced to the bench.

Defensive rebounding will also be key for KU. 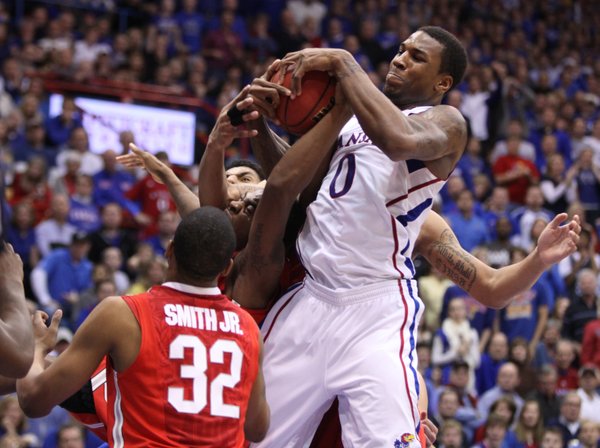 Kansas forward Thomas Robinson rips away a rebound from the Ohio State players during the second half on Saturday, Dec. 10, 2011 at Allen Fieldhouse. by Nick Krug

If Robinson is guarding Thomas, he most likely will be pulled away from the basket, meaning players like Withey and Travis Releford need to pick up the slack on the defensive glass against one of the best offensive rebounding teams in America.

Offensively, KU will need to try its best to limit turnovers. Craft is the only Ohio State player who ranks in the top 500 in steal percentage, meaning if a turnover is forced, most likely he's the one creating it. Craft will be matched up on Tyshawn Taylor, though the Ohio State guard has been outstanding this season at forcing turnovers while playing help defense as well. Because the Buckeyes do such a great job of limiting opponents' second-chance points, the Jayhawks' ability (or inability) to avoid turnovers should be magnified in this game.

Finally, because KU is a slight underdog against a team that doesn't foul often, shooting a few extra three-pointers might not be a bad way to go. KU has made just 24 percent of their threes in the NCAA Tournament, but Ohio State's defense appears to be prone to giving up the outside shot. In the teams' first matchup, KU was 9-for-17 from three (53 percent), which included a 5-for-7 performance from Johnson. 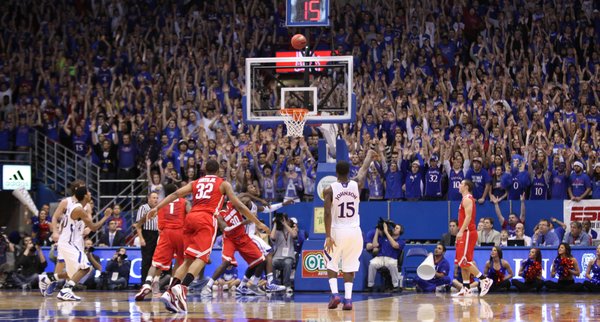 Kansas guard Elijah Johnson falls backward as he watches one of his five three-pointers go down against Ohio State during the second half on Saturday, Dec. 10, 2011 at Allen Fieldhouse. by Nick Krug

Putting up a three-point shot would at least give KU the chance for a high reward (three points) while also presenting a small opportunity for an offensive rebound if the shot is missed.

Against one of the nation's top defenses — and one that forces a lot of turnovers — KU certainly could do much worse than getting an opportunity at three points each possession.

No prediction for victory Jesse? As usual, awesome analysis from a guy who should be anchoring his own ESPN show. This will be a heck of a slug fest. The team that shoots it best wins.

Jeese analyzes too much for espn. he doesn't have enough love for duke or unc to be on espn.

“According to KU Athletics, KU will be the home team and will wear its white uniforms.”

This is an excellent article! TRob guarding DThomas worries me. I think Self definitely uses some zone defense so TRob doesn't get too tired chasing DThomas all over the floor. I'm also looking forward to watching Withey guard Sullinger, height vs. power.

If I were picking with my head and not my heart, I would pick OSU -- not just to beat KU but to win the whole thing. I think they're the best, most-balanced team.

Now would be an excellent time for TT to break his 3-point slump in domes.

The talk on the Big Ten is that Craft is a "hacker" and gets away with a lot of fouls. I wonder how the game is going to get called, are they going to call it close or, as they say, let them play? Ravenel and Craft fouled out in the previous game. I believe a closed called game favors KU; although in that situation Whitey could be in foul trouble too.

"Adams called the 10 officials selected “the best of the best.”

Anybody got anything to say about these officials? Good or bad?

Whitehead did out OSU game back in Dec. He does a lot of Big12 and Big10 games.

DeRosa did out A&M game there, and our Kst game there. I think he is the same DeRosa that was suspended by the NBA a game for throwing the ball at a fan. His main gigs wer Big12 and horizon.

Ayers, did no regular season Big12 games but had Baylor twice in the Turny. His main Confs, ACC and Big East.

Eades, did the lower side of the Big12 Conf. Bracket. He also did Tx at KU.

Harris did our game in Maui vs Georgetown, but is mostly a west coast ref, but did some MVC also.

Jones, is an ACC and Big East guy did no KU games this year. He did do the KY Baylor game tho.

Luckie, Also did our Georgetown game in Maui, another Big East and ACC guy mostly.

Shows, Did 3 KU games this year, @ Baylor, @ a&M and North Carolina. But he has done 6 kentucky games this year as well. And his main job is SEC and Big East.

Stuart, did out Baylor loss in Big 12 turny, plus @ OKst, @ Baylor @ Texas and South Florida.

Hope CBS can afford to get the Replay truck there this time.