Kansas' 90-66 victory over Kansas State on Saturday is an interesting one to diagnose statistically.

At some point in the game, KU seemed to play well in every facet. The Jayhawks rebounded and defended well early, while getting good shots and shooting the ball well late.

What we end up with is a game where the Jayhawks were good both offensively and defensively, with neither area significantly better than the other. http://www2.kusports.com/photos/galle...

KU scored 1.23 points per possession, which is great against a defense like KSU's but still only ranks as third-best in six Big 12 games.

Meanwhile, KU allowed 0.90 points per possession to KSU, which was its best effort in Big 12 play but just the 10th-best effort of the year.

Here's a breakdown by half to further break down KU's play on Saturday: 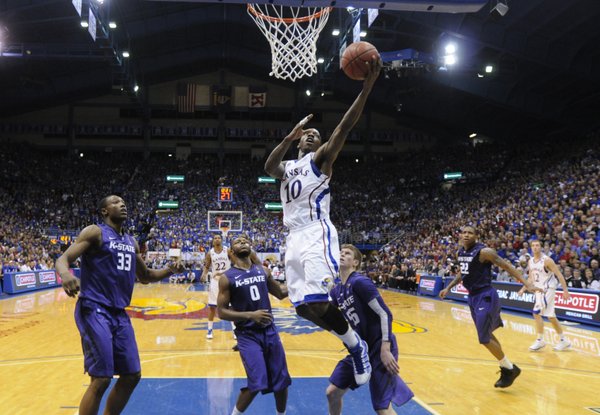 Kansas guard Tyshawn Taylor cuts to the bucket past Kansas State defenders Wally Judge (33) Jacob Pullen (0) and Will Spradling (55) during the second half on Saturday, Jan. 29, 2011 at Allen Fieldhouse. by Nick Krug

As it was, we once again saw that these Jayhawks are balanced enough to dominate a good opponent offensively or defensively — and sometimes both ways in the same game.

Thomas Robinson and Tyshawn Taylor both had great games, but the M.O.J. goes to Markieff Morris. 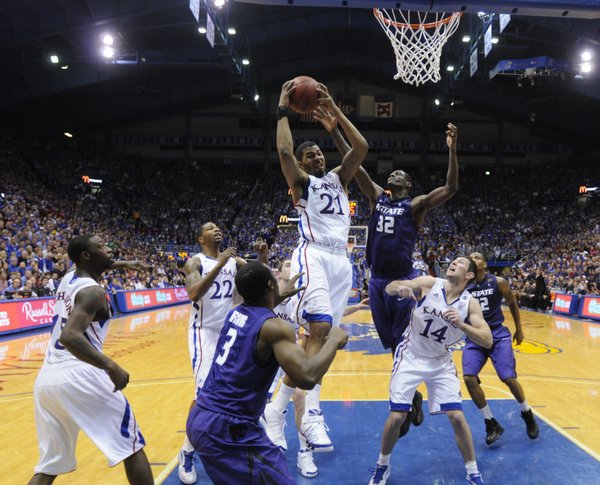 Kansas forward Markieff Morris gets up for a rebound over Kansas State forward Jamar Samuels during the first half on Saturday, Jan. 29, 2011 at Allen Fieldhouse. by Nick Krug

The 6-foot-9 forward posted 1.45 points per possession used while ending a high number of possessions (26 percent) while he was in. He also scored at least one point on 78.8 percent of the possessions that he ended.

Markieff was at his best in the first half, dominating the defensive glass when KSU 6-foot-8 forward Curtis Kelly was still in there (and during the time when the game was still in doubt).

Add in 8-for-10 shooting, two steals and two blocks to go with just one turnover and two fouls, and it's easy to see why KU coach Bill Self afterwards said that Markieff was terrific.

This is really tough, as KU was pretty good in every statistical category. 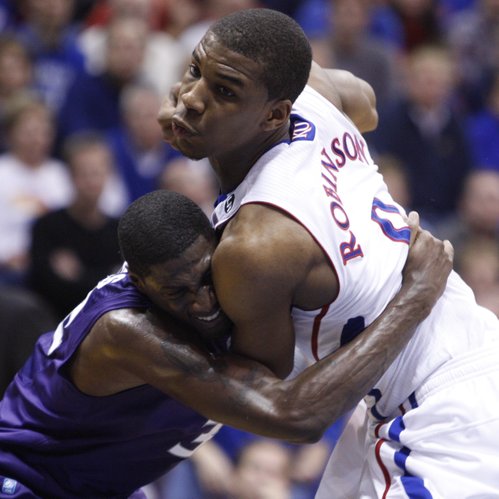 Kansas forward Thomas Robinson and Kansas State forward Jamar Samuels wrestle for position during the first half on Saturday, Jan. 29, 2011 at Allen Fieldhouse. by Nick Krug

We'll go with something more eye-based for today, and that was KU's inability to guard KSU's Jacob Pullen without Taylor on the floor. 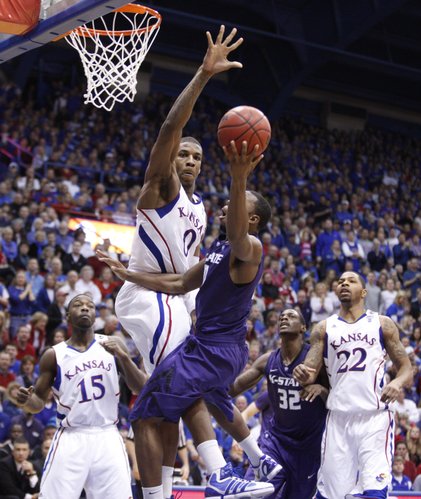 Kansas forward Thomas Robinson defends against a shot by Kansas State guard Jacob Pullen during the second half on Saturday, Jan. 29, 2011 at Allen Fieldhouse. At left is KU guard Elijah Johnson and at right are KSU forward Jamar Samuels and KU forward Marcus Morris. by Nick Krug

By my count, when Taylor exited the game in the second half, Pulled scored 15 points on 5-for-7 shooting. Take out that part, and Pullen's final line is six points on 3-for-15 shooting.

KU's guards weren't good defensively against Colorado, and though Taylor played superbly on Saturday, there still has to be some fear that KU might have issues defensively if Taylor is tired/injured/has foul trouble at any point this year.

It's time for some other guards — especially Elijah Johnson — to show they can hold their own defensively when called upon later this year.

For the second straight game, Tyrel Reed had an off-shooting night during a game when his teammates thrived offensively. 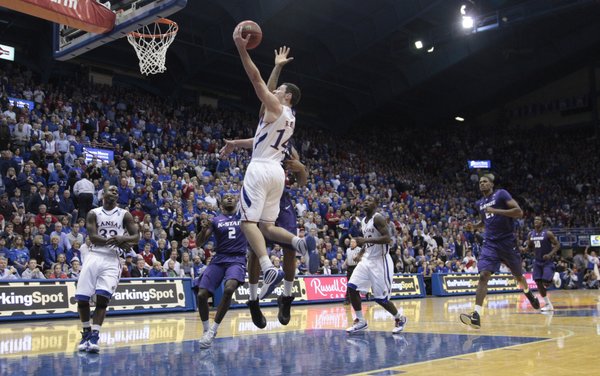 Tyrel Reed (14) takes a layup to the basket during the second half of the Jayhawks' game against the Kansas State Wildcats, Saturday, Jan. 29, 2011 at Allen Fieldhouse. Former KU star Wayne Simien had his jersey retired in a halftime ceremony at the game. by Mike Yoder

The senior guard posted just 0.85 points per possession used — the lowest among KU's nine primary rotation players. In fact, Reed was the only player in that rotation to produce less than 1 point per possession used. Having said that, his impact was limited, as he only used up 13.6 percent of KU's possessions while he was in during his 1-for-6 shooting night.

One trend to watch with Reed going forward will be his turnovers. During Reed's first 17 games, he was remarkably sure-handed, turning it over just 12 times in 499 combined minutes.

In the guard's last three games, though, he's turned it over seven times in just 85 minutes.

One reason the Burlington native has been so consistent this season is because of his ability to avoid giveaways on a team filled with other careless guards.

It'll be interesting to track if Reed can revert back to his low-turnover form in upcoming Big 12 games.

Though KU was better than KSU in nearly every facet, the Jayhawks' advantage Saturday was most evident in shooting percentages. 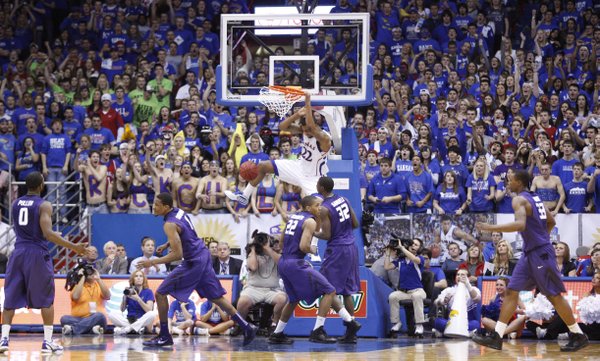 Kansas forward Marcus Morris delivers a jam before the student section and the Kansas State defense during the second half on Saturday, Jan. 29, 2011 at Allen Fieldhouse. by Nick Krug

KU's 66.4 eFG% was its fourth-highest of the year (and the highest KSU has allowed all year), while KSU's 39.0 eFG% was its second-lowest of the season.

The most impressive part about KU's victory might have been how complete it was. The Jayhawks weren't dominated in a single statistical area, making it difficult to nitpick about any part of Saturday's blowout win.

And yet this team is still far away from reaching its potential...

Correct! Potential, potential, potential. HCBS must salivate when he considers that this team has such a great record but still has much greater possibilities. However, he must also be ultra-frustrated when they keep falliing short. But that's what coaches are for, to help them achieve that highest level.

Come on Hawks, keep improving and present Self with a good night's sleep.

Aren't we getting a little spoiled? Face it, the only team to "reach its potential" in fandom terms was the 2008 team, and it took two years. The previous year the same team lost to UCLA in the Elite Eight. (I'm not counting Cole who played 8 significant minutes the whole 2008 season.)

To reach their potential, these guys need to improve as much in one season as the Champs did in two - a tall order. We can only hope.

Yes, we absolutely are spoiled when it comes to basketball - that was my point.

The team as a whole needs to be better than the sum of its individual parts, and this team is finally putting it together on the court - but they can still do much better.

Like Coach Self has said before: this team isn't special yet, but they sure have the potential to be incredibly special.

perhaps reed's increased turnovers are due to him becoming more of an attacker of the basket?

chuck — Thinking back, your observation about Reed seems right. I looked back, and two of Reed's seven turnovers in the last three games were charges.

There's nothing wrong with Reed attacking the rim; I'm just not sure if KU needs a ton of that from him, especially if it's going to increase his turnover count on a team that already has had issues with turnovers this year.

I believe that Tyrel is driving more because his shot is not falling from outside. You always hear people saying that shooters keep shooting and that if someone in a slump hits a couple of easy ones it is likely the slump will end. Tyrel knows that and is likely pushing somewhat to try and break his slump.

While KU doesn't need that from him I do not think it hurts the team much as when he avoids the charging call he draws fouls and he hits most of his free throws. However I do wish he'd pull up 10-15 feet out for a jumper and avoid the charging calls.

the pic of T-Rob and Samuels looks like something straight out of a cage match!

I think Samuels is just giving TRob lots of love. May have been the biggest hug he got all day.

I agree chuck. I think he is trying to do more than just spot up, driving, and out in transition with the ball. I think Tyrel's turnovers are much less problematic than Josh's, or at times Tyshawn's are, at this point when put in the context of their overall roles. It is still early, but, Tyrel may be one of those players that is at his best when his team most needs it.

Reed seems to always be the rock on the team - the "KS kid" that keeps them focused on proving the point on the scoreboard. That's what comes across while watching the games and reading/listening to interviews, anyways.

Jesse, you said K-State didn't win in any statistical category, but didn't they shoot a higher percentage of free throws than we did? I suspect that was because so many of the fouls were against Thomas, and that's definitely the weakest part of his game.

oldalum — I didn't mean to say that KSU didn't win any statistical category, but instead that KU won nearly every statistic (and wasn't beaten badly in any one I could find). Sorry if it was confusing.

Also, though KSU might have shot a higher FT percentage (65 percent to 63 percent), KU definitely won the free-throw battle.

Thanks, Jesse. That answers my question.

Watching this last game made me think..."finally!" Yes, this was KU playing well. What a satisfying feeling to see Kansas hitting on all cylinders. Great job, Hawks!

Jesse, you are my hero. As a math/stat guy myself, your articles just make me salivate with statistical excitement. One thing, and I know it might be a bit much since you put so much into these articles already, that I think would be great is a breakdown of what you use to anoint you M.O.J. after each game (i.e. a listing of all of the players who played significant minutes outside of mop-up minutes and their stats like points per possessions used, possessions ended stats, etc.) Kind of like Keegan does only with detailed stats instead of just ranking 1-9/10. I'm pretty sure you have all the info all ready to go in a spreadsheet just waiting to be shared. :)

*your. I got overly excited haha. Sorry for the typo. :D