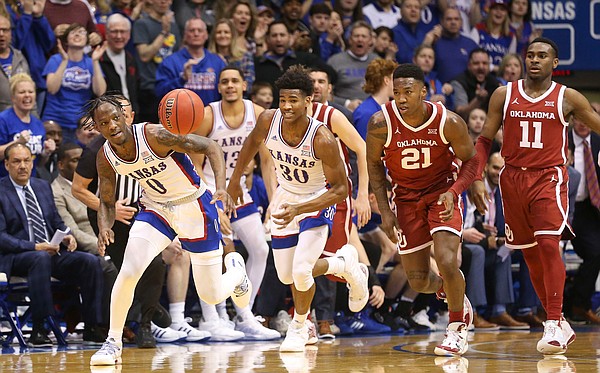 Kansas guard Marcus Garrett (0) comes away with a steal from Oklahoma during the first half on Saturday, Feb. 15, 2020 at Allen Fieldhouse. by Nick Krug

1 – Marcus Garrett – He might’ve taken the top spot again on the strength of his defense alone. But when you throw in a career-high 6 3-point makes, it quickly becomes a no-brainer. Garrett was absolutely sensational again on both ends, leading KU’s offense, defense and intangibles throughout the victory.

2 – Udoka Azubuike – A monster double-double of 15 points and 17 rebounds, Azubuike needed no reminder to wake up during KU’s most recent early tip. Added 4 blocks, some of them vicious, to his solid stat line.

3 – Devon Dotson – Had it been any other day, Dotson’s line would’ve been good enough for the top spot. 19 points, 8 rebounds, 5 assists and just 2 turnovers. But on Saturday, he shared the floor, and the spotlight, with Azubuike and Garrett, who bumped him to third after another strong showing.

4 – Ochai Agbaji – I love the way Agbaji has been playing lately. Confident at most spots on the floor and willing to crash the boards and mix it up with bigger bodies at all times. He finished with 10 points, 6 rebounds, 3 assists and 1 turnover while knocking in a couple of 3-pointers, as well.

5 – Isaiah Moss – Got the start over Christian Braun and showed some confidence as a result. Didn’t quite have the impact that he had in the win at West Virginia, but he also didn’t need to. Finished with 8 points in 33 minutes and hit 2 of 3 from 3-point range, both of them pure, no-hesitation jumpers.

6 – David McCormack – Wasn’t great in the first half, but improved tremendously in the second. His poise was evident and he put together a stretch of three straight baskets for Kansas early in the second half.

7 – Christian Braun – Three points, an assist and a block in 10 minutes in his return to the bench after starting the last handful of games. The triple was key at the time, giving KU the lead back after the Sooners had taken it with a 9-0 run.

8 – Tristan Enaruna – Played 9 minutes of a pretty typical game for him, complete with mistakes and flashes of what he could do if he gets confidence and becomes more consistent.

Tristan needs more meet on the bone and more muscle.