Svi (for 3) tops ratings in blowout victory vs. Omaha 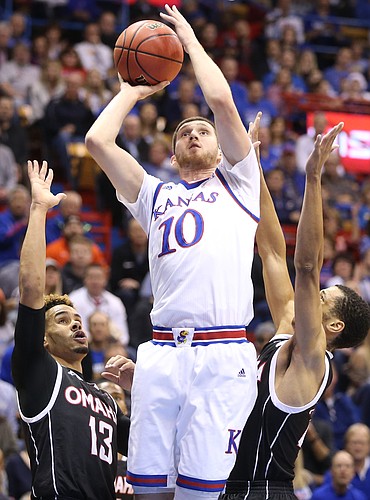 Kansas guard Sviatoslav Mykhailiuk (10) elevates for a shot over Omaha guard Daniel Norl (13) and Omaha guard Zach Jackson during the first half on Monday, Dec. 18, 2017 at Allen Fieldhouse. by Nick Krug

1 - Svi Mykhailiuk: Came out of aggressive from the tip and never let up. Made 6 of 7 3-pointers, scored 26 points and had four rebounds and four assists to go with one turnover.

2 - Devonte’ Graham: Kept team moving at fast pace, made 5 of 7 3-pointers and had eight assists, four rebounds and just two turnovers. Scored 17 points on a night he attempted just seven shots from the field.

4 - Udoka Azubuike: Posted second double-double in a row and third of his career with 11 points and 12 rebounds in 22 minutes.

5 - Malik Newman: Grew hot late and scored 9 of 14 points in the second half. Also had four rebounds and four assists.

6 - Sam Cunliffe: Skied to throw down two lobs, hit a 3-pointer, hustled and showed he will help bring team scoring punch off the bench. Scored nine points in 20 minutes and had two rebounds and two assists.

7 - Marcus Garrett: Stayed closer to the basket and came away with four pints, five rebounds and two assists without turning it over.

8 - Mitch Lightfoot: Played well for the second game in a row, totaling six points, three rebounds and a blocked shot.

I thought one of Cunliffe's baskets was a rebound/putback rather than a second lob. In any case, it's good to see him get his feet wet and get past the first-game heebie-jeebies.