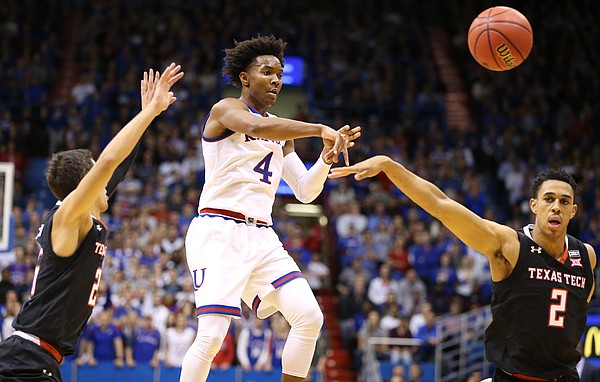 1 - Devonte’ Graham: Gave tremendous effort for 40 minutes, but didn’t have enough help at either end to pull off the victory. Scored 27 points on 6 of 13 shooting (2 of 8 from 3), dished six assists and turned it over five times.

2 - Marcus Garrett: Put himself in position to get six rebounds and two steals and was 3 of 3 from the field. His man can cheat off him to help out when he’s on the perimeter because he’s shooting .190 from 3-point range.

3 - Udoka Azubuike: Blocked just one shot and made just 3 of 7 free throws to go with 11 points and seven rebounds. Back still isn’t 100 percent.

4 - Svi Mykhailiuk: Had some nice drives to the hoop and just as many out-of-control ones that contributed to putting him in foul trouble. Fouled out with 3:35 left after totaling 11 points, six rebounds, five turnovers and three steals. Is much more aggressive this season, which is a good thing, except when it’s a bad thing.

5 - Sam Cunliffe: Lowered his shoulder and drove to the hoop for a bucket that cut Texas Tech’s lead to eight points with two minutes and change left. Drove left and put back his miss for a bucket to cut deficit to seven with a minute and change left. He played and produced nine points and two offensive rebounds.

6 - Malik Newman: Played better late than early but still hasn’t shot particularly well (.350 from 3-point range) and sometimes seems too determined to get up a shot and at other times, not eager enough to drive to the hoop. Scored all nine of his points in 13 second-half minutes. Had no assists on the night and had two turnovers without a steal.

7 - Lagerald Vick: Two points, two rebounds and zero assists all were season lows. Made 1 of 9 shots and missed all six 3-pointers. Didn’t look like the same player.

I sure hope I'm wrong but I'm expecting to never see Preston in crimson and blue.

Vick might as well sat on the bench for this game.

Frank Mason III had Devonte to play in tandem with him. Devonte has no one apparently. Sve tries better than any of the rest of them but Graham needs more help. It takes more than one or two players when the other team has five on the floor.

Texas Tech had enough free throws to win the game.