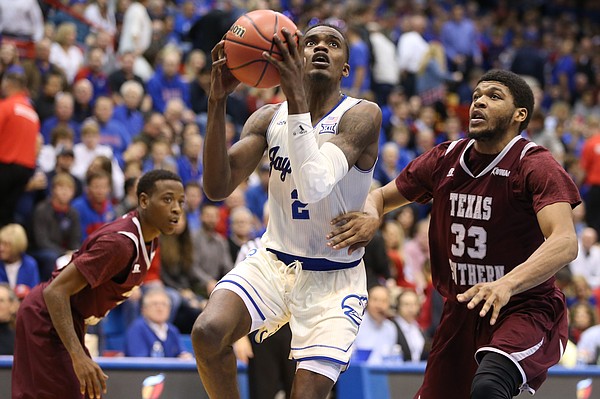 Kansas guard Lagerald Vick (2) goes to the bucket against Texas Southern guard Robert Lewis (33) during the second half, Tuesday, Nov. 21, 2017 at Allen Fieldhouse. by Nick Krug

1 - Lagerald Vick: Uses great court vision to put passes on the money, jumps quicker and higher than anybody on the team, soft shooting touch extends well beyond 3-point line and in some ways he is beginning to resemble a three-inches-shorter version of Scottie Pippen. Made 3 of 4 3-pointers on way to 19 points, 10 rebounds and seven assists.

2 - Svi Mykhailiuk: Made 5 of 7 3-pointers to improve his season long-distance percentage to .533 and led six scorers in double figures with 21 points.

4 - Marcus Garrett: Quietly worked his way to a 13-point, 11-rebound night with three assists and two blocked shots and didn't have a turnover.

5 - Udoka Azubuike: Showed good stamina while hustling his way to 20 points and nine rebounds in 27 minutes, playing to a virtual stalemate with the taller, slimmer Trayvon Reed (19 points, 14 rebounds and four blocked shots).

7 - Mitch Lightfoot: Had 10 points and four blocked shots but just three rebounds, just one off the defensive glass. One of six Jayhawks to make a 3-pointer.

Marcus Garrett is a disruptive force and plays his ass off. He could be a real difference maker by conference time.

Mitch has a nice soft jumper. Should use him more.