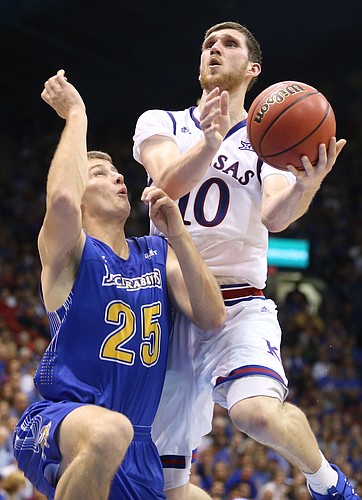 Kansas guard Sviatoslav Mykhailiuk (10) goes to the bucket against South Dakota State guard Lane Severyn (25) during the second half on Friday, Nov. 17, 2017 at Allen Fieldhouse. by Nick Krug

1 - Svi Mykhailiuk: Senior delivered a career-high 27 points, didn't commit a turnover, stole the ball four times, had five defensive rebounds and made 10 of 17 shots, including 5 of 7 3-pointers. Team needs more aggressiveness out of him and that's exactly what he's delivering. Leads team with 19.7 points per game.

2 - Lagerald Vick: Attempted just 12 field goals and had 22 points, seven rebounds, three assists and a blocked shot and didn't turn it over once. Made 9 fo 12 shots and 3 of 6 3-pointers. Coach Bill Self said he thinks Vick has the potential to develop into a defensive stopper but has not yet embraced that mentality. Averaging 18 points a game.

3 - Devonte' Graham: Didn't shoot well and forced one or two shots but otherwise played well, delivering on-the-money pass after pass. Had 11 assists and just one turnover.

4 - Udoka Azubuike: Bit on a shot fake from a guard under the basket, left his feet and fouled him on the way down for his second foul of the first half, which earned him a spot on the bench. Played just 23 minutes and had just two rebounds, but otherwise played well. Made 8 of 9 shots and unveiled an up-and-under move that looked pretty smooth.

5 - Malik Newman: Phog Allen used to say that he judged a player largely by what he did when he didn't have the ball in his hands. Self subscribes to the same philosophy. By that measure, Newman hasn't immersed himself into the Kansas basketball culture yet, but he did shoot well. Newman made 4 of 7 field goals, 2 of 4 3-pointers and scored 13 points. He also had two assists but did not pick up a rebound after totaling nine against Kentucky.

6 - Marcus Garrett: Had seven rebounds, four assists, four steals and a blocked shot and didn't commit a turnover. Had a defensive lapse or two, not getting to 3-point shooters in time, and made just 1 of 5 shots and went 0 for 3 from 3.

7 - Mitch Lightfoot: He knows how to block shots and had four in this game, but at this point, it's fair to ask whether his shot-blocking instinct is more of a blessing or a curse because as Self pointed out during post-game interviews, he tries to block everything, bites on shot fakes and that's where many of his fouls originate. He fouled out in seven minutes, a very active seven minutes in which he totaled two points, three rebounds and two turnovers.

This new Svi needs to keep playing hard, and doing more than scoring. There is much to his game when he's aggressive and when he does not get down if he misses a couple. Generally speaking he takes pretty good shots, he moves without the ball, and he can drive, or shoot, he's also a good passer, especially to the high post. I for one, think his play is one of the best things going so far this season.

Newman is learning the pace of the KU game. He needs to work more without the ball, and be a junkyard dog on rebounds.

Yeah, so far Svi is exceeding expectations by a wide margin, hopefully he can keep it up. I know he won't average 20ppg but if he can keep showing his growth in the non-shooting parts of his game, it will be huge for us.

Dok is exceeding my expectations offensively but his rebounding hasn't impressed me yet. Seems he's rarely in position for rebounds (though he is often surrounded by defenders which opens up rebounding lanes for the guards so that's a positive).

Vick is a little above my expectations. His drives and midrange game are welcomed surprises.

Newman is well below expectations at this point. Like you said, he seems to still trying to integrate himself into the team. Certainly needs to do more of the little things.

When Graham finds his shot this team will take a big step in the right direction.

Adding Preston and De Sousa (if both of those happen) will be HUGE to where this season ends up.

I like the way Newman is playing. He has a history of trying to do too much and soiling the game. He needs to fit in as a role player.