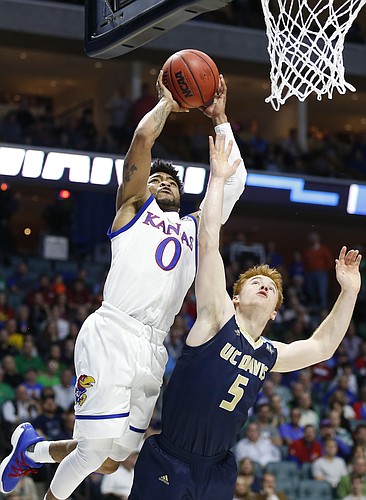 Kansas guard Frank Mason III (0) hangs to finish a bucket off a lob over UC Davis guard Siler Schneider (5) during the first half on Friday, March 17, 2017 at BOK Center in Tulsa, Oklahoma. by Nick Krug

1 - Frank Mason: Led the team with 22 points and eight assists.

2 - Josh Jackson: Played where UC Davis players couldn't reach him and finished with 17 points and seven rebounds. He made 8 of 12 field goals and his only 3-point shot.

3 - Devonte' Graham: Made 4 of 7 shots, all 3-pointers and made all four free throws during a 16-point, four-assist night.

4 - Landen Lucas: Dominated the interior with 13 points and 11 rebounds against the much shorter Aggies.

5 - Sviatoslav Mykhailiuk: The partisan KU crowd counted down the shot clock, “Four, three, two, one,” as the tightly guarded Mykhailiuk executed a couple of dribble moves to free space for himself and got off a shot just in time. Swish. The 3-pointer pushed KU’s lead to 77-43 midway through the second half. He finished with 16 points, despite making just 2 of 7 3-pointers.

6 - Carlton Bragg: Had six points and five rebounds in 13 minutes.

7 - Lagerald Vick: Totaled three points and five rebounds in 25 minutes. Missed both 3-pointers, one of them hitting the side of the backboard.

9 - Mitch Lightfoot: Scoreless with two blocked shots and an assist in six minutes.

No mention of Tyler Self? He was perfect, hitting a three and going two for two from the line.

Exactly. He had a career-high 5 points, his three-pointer got the Jayhawks to 100 points and made the bench go crazy. Frank Mason's reaction was the best thing ever. Tyler deserves to be ranked just for that.

We agree it was a great showing for Tyler Self, but the walk-ons have never been included in Keegan's ratings.

If KU is gonna cut down the nets this year they need this ranking and level of contribution to hold steady for the tournament. Pretty nice all around game for the team.

Everybody played well today. Bench has been missing on occasions. We can't afford any drop off. Friday was outstanding.