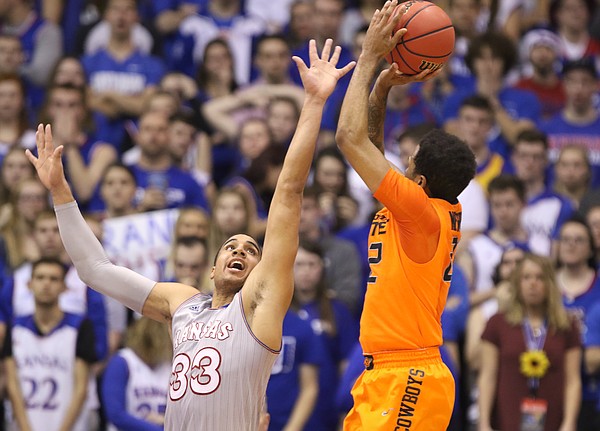 Kansas forward Landen Lucas (33) gets in the face of Oklahoma State guard Jeff Newberry (22) on a shot during the second half, Monday, Feb. 15, 2016 at Allen Fieldhouse. by Nick Krug

1 - Landen Lucas: Scored a career-high 14 points and produced his third consecutive double-figure rebounding game with 10 boards, five off the offensive glass. Lucas is KU’s most improved player and he vows he eventually will hit an open jumper.

2 - Frank Mason III: He and fellow perimeter starters Devonté Graham and Wayne Selden Jr. combined for 92 minutes without turning it over once. Mason had some tough rebounds in traffic and finished with 14 points, six assists and five rebounds. He seems fresher than when he was playing through a lot of pain in his left elbow.

4 - Brannen Greene: Made the most of his 18 minutes with 11 points and five rebounds. Compensated for defensive lapses by shooting 3 of 3 from three and had a particularly stylish celebration of his three at the end of the first half. Think: cowboy with two pistols spinning. I wonder if he watches a lot of Westerns.

5 - Perry Ellis: Overcame rough first half (1 for 7) to finish with 15 points, but had just four rebounds in 25 minutes.

6 - Devonté Graham: Followed the game of his life in Norman, where he was the best player on the floor at both ends in both halves, with a solid performance. Totaled 10 points and made 2 of 5 three-pointers. Took an ill-advised three-pointer early in the clock, up 11 points with 14 minutes left in the game.

7 - Carlton Bragg: Played seven minutes, scored six points and gave up four at the other end. A talented scorer gifted with a soft shooting touch, Bragg projects to develop into a star once he figures out how to defend and rebound against other big, quick players.

8 - Jamari Traylor: Had two points, a rebound and a blocked shot in 13 minutes.

10 - Hunter Mickelson: Was whistled for a foul on a clean blocked shot. He can’t seem to catch a break in the blocked-shot department. Statisticians will miss one here and there and refs will steal from him as well. He’s a nice guy. Cut him a break!

12 - Lagerald Vick: I can’t remember who was standing alone in the right corner, but he should have passed it to him because he was wide open. Instead he jacked a shot and missed. Not good.

Was whistled for a foul on a clean blocked shot. He can’t seem to catch a break in the blocked-shot department. Statisticians will miss one here and there and refs will steal from him as well. He’s a nice guy. Cut him a break!

Those of us that can't make decisions about who plays often wonder how effective he would be if he played more minutes. Guess that Korea experience got lost somewhere.

I think 3 of Greenes rebounds came off missed free throws where the big guys blocked out and he squeezed between them to grab the board. Let's not get too excited about him being "tough" and rebounding. He doesn't get the tough ones. And as pretty as his shot is (seriously, wow), I hesitate to say it makes up for his bad defense.

All the perimeter players this game got caught watching the ball leaving their man wide open on a backdoor. All of them. If I was coaching against KU I would be taking advantage of that.