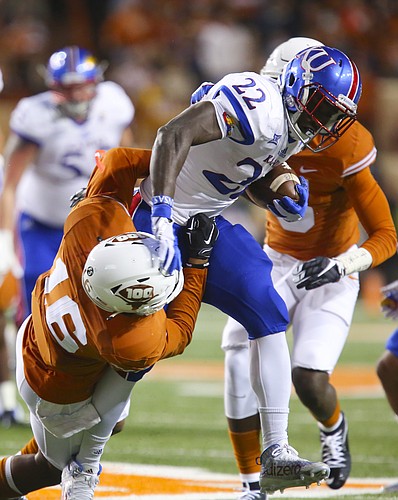 No. 2 - Dorance Armstrong Jr.: Stretching his long arms, he was credited with three pass break-ups to go with three tackles and 1.5 tackles for loss. Is having strong second half to his true freshman season.

No. 3 - Darious Crawley: Caught three passes for 63 yards and a touchdown.

No. 4 - Shakiem Barbel: Had three receptions for 19 yards and was credited with a touchdown when he fell in the end zone on De’Andre Mann’s fumble just shy of the goal line.

No. 5 - Ryan Schadler: Used his sprinter’s speed to spring free for a 23-yard run and finished with 56 yards on six carries, a 9.3-yard average.

No. 6 - Kent Taylor: Got open consistently and caught three passes for 28 yards.

No. 7 - Tevin Shaw: One of KU’s more physical defenders, the defensive back had seven solo tackles.

No. 8 - De’Andre Mann: Ran hard for 32 yards and a touchdown on eight carries and had a 14-yard reception, but fumbled into the end zone just shy of the goal line.

No. 9 - Courtney Arnick: Forced a fumble and had a tackle for a 3-yard loss.

No. 10 - D.J. Williams: Had a 14-yard sack and stripped the ball, enabling teammate Marcquis Roberts to recover the fumble on the Texas 7.

How do you give credit to Shaw who was burned many times when smithson who had to make double digit tackles from poor defensive play is left off.

Didn't Mann have two fumbles? That is way too much for a RB!

You needed to put in lots of overtime to find a top 10.