Mario Chalmers proves second round no impediment to NBA success 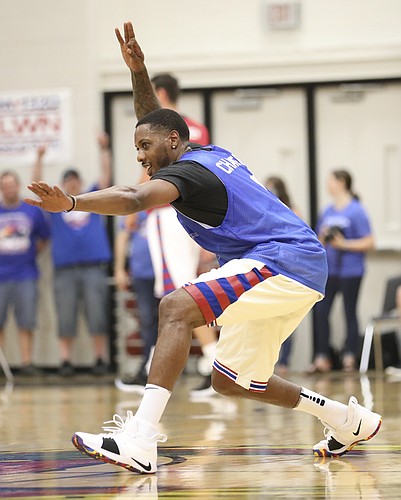 Blue Team guard Mario Chalmers celebrates after hitting a three to end the half during the Rock Chalk Roundball Classic on Thursday, June 14, 2018 at Free State High School. by Nick Krug

One of the scariest aspects of sports betting on its way to becoming legal involves "sure things," wagers you absolutely, positively, in no way, shape or form could lose.

For example, if Sprint Center would have had a sports book on March 16, 2008 and offered odds on Mario Chalmers becoming a first-round draft choice, I would emptied my pockets and all the change in my car's cup-holders and put it all on Chalmers.

That was the day Chalmers led Kansas to the Big 12 title by torching Texas for 30 points. He made 8 of 12 3-pointers and dished six assists. Everything about him screamed first-round draft choice. Nothing that happened in the clutch the rest of the season hurt his stock.

Yet, Chalmers spilled into the second round and was chosen with the 34th overall pick. Clearly, there is no accounting for the taste of NBA general managers.

Chalmers was the first of eight Kansas players chosen in the second round during Bill Self's tenure at Kansas. There have been 14 first-round picks.

Getting selected in the first round is a big deal because it guarantees two years of salary. For example, the last pick of the first round this season will be guaranteed about $2.1 million for his first two seasons.

Second-round selections aren't guarantee a nickel, so it's easy for teams to cut them.

Even so, all eight Self second-rounders played in the NBA, none getting much playing time, other than Chalmers and rookie Frank Mason.

Chalmers, an unrestricted free agent after averaging 7.7 points for the Memphis Grizzlies in 66 games, including 10 starts. He has earned $24.7 million in eight NBA seasons and was a starter for two NBA championships won by the Miami Heat.

None of KU's four draft prospects are projected in various mock drafts to be selected in the first round. Devonte' Graham, Svi Mykhailiuk, Malik Newman and Billy Preston are all candidates to be taken in the second round.

A look at second-round draft choices during Self's tenure at Kansas:

Not sure I agree with this title. Chalmers appears to be the exception and not a proof of the lack of impediments facing second rounders.