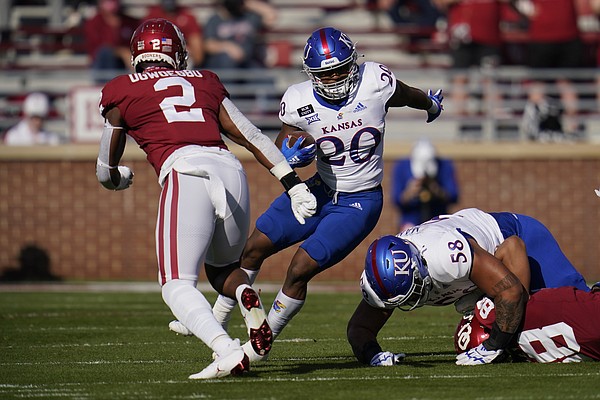 Vegas certainly isn’t expecting a miracle in Year 1 of the Lance Leipold era.

With the college football season just around the corner, Superbook recently released conference title odds for those able to place a bet in either Nevada or Colorado. The odds were shared via Twitter on Monday by Brett McMurphy, who is a college football insider for the Stadium Network.

Unsurprisingly, the Kansas football team is a long shot to win the Big 12 crown. The Jayhawks, who haven’t won more than three games in a season since 2009, enter this year with 2,000/1 odds to win the league.

KU having the longest odds to win the Big 12 should be expected. Kansas is coming off a 0-9 campaign, and has finished in last place in the conference standings for six consecutive seasons.

The Jayhawks are also dealing with drastic coaching change, as Leipold didn't take over the program until after spring ball had been completed. But it is significant how much longer KU’s odds are compared to the rest of the Big 12 teams.

Vegas is expecting a rematch in the championship game, with Oklahoma having 4/5 odds to win the title and Iowa State coming in at 12/5 odds. In last year’s title game, Oklahoma secured a 27-21 win over Iowa State for its sixth consecutive crown.

In its 2021 college football preview magazine, Pro Football Focus gives the Sooners a 60% chance of winning the Big 12 conference again. PFF projects that the Cyclones have a 11% of finishing atop the league standings this fall.

Texas, meanwhile, has the third-best odds after being priced at 10/1 to win it all during Steve Sarkisian’s first season at the helm. Per PFF, the Longhorns have a 10% chance of winning the league. They were also picked to finish third in the Big 12 preseason poll.

TCU (14/1), Oklahoma State, (25/1) and West Virginia (30/1) are the only remaining squads with odds of 30/1 or better. PFF likes Oklahoma State the best of those three teams, giving the Cowboys a 9% chance at winning the conference. TCU has a 3% chance to win the league via PFF, while West Virginia comes in at 2%.

Baylor, Kansas State and Texas Tech are all in the same tier with 80/1 odds to win the league on Superbook.

It seems foolish to put money on someone other than the Sooners, but either Texas or Oklahoma State would probably be the best bets given what prognosticators expect from both squads.

If I had to pick one, I might actually take Texas even though the starting quarterback competition is uncertain. The Longhorns should take a leap with one of the best offensive playcallers in college football as their head coach, and running back Bijan Robinson is one of the better offensive players in the league.

As for Kansas, I would never recommend betting on the Jayhawks — no matter the price — given the circumstances. That said, KU won’t have to wait long to potentially prove that the number shouldn’t have been as long entering the year.

Kansas opens league play with a home contest against Baylor on Sept. 18.

It shows how far we have to go.

Just to get in sight of the rest of the conference.

Fortunately, this isn’t a track race or we’d be getting lapped.

Wow, our odds are that good?

The Baylor game looms large. I’m not expecting a win, but it will be a real measuring stick to see where we are as a team in comparison to the conference.

Barring a rash of injuries or a group of 4-game opt-outs from the roster, I do anticipate this team improving each week. Better coaching, more familiarity, etc.

I think that Miles made some incremental improvements to the trashed Beaty roster, so we should have nudged forward slightly from that devastation, even though we lost three good players to the portal.

The portal additions we received should shore up some weak points. The Buffalo guys should help the transition, and I think that we will start to see the impact of having a quality coach for the first time in 10 years.

All we really need to do is blur the lines between moral and actual victories. Think Helm titles.

And in other obvious news, the sky is blue without clouds. Also the world is round and 71 percent of earth is covered by water. Also, on a compass, North still points North, South still points South, East still points East, and West still points West. When there is real important news about KU Football, write about it. KU Football being at the bottom of the Big 12/10, has never been news. Its just facts. We've all known this for many, many years. Update us when we get a quarterback like Patrick Mahomes II or Trevor Lawrence. I'm very sorry that the best news we can get about KU Football is that they are horrible and dead last in odds of, well, everything. I've heard many times before, "if you don't have anything nice to say, don't say anything at all." Well none of this needed to be said. We all know. It's not quite October/November yet. You know, when the important stuff happens for KU, or at least potentially might happen. We already know what will happen for the football season.

I think the Jayhawks have crazy long odds on winning more than 2 games.

A bet that could be easily hedged by betting against KU mostly every week.