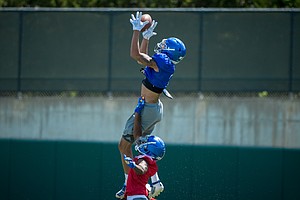 Watch out for Kyler Pearson this season. He received some notice during spring practice.

Wonder why he's not listed above.

If we have found OTs that allows Clark to play inside where he belongs plus one of the better centers, this could be a vastly improved OL. There’s a nice stable of RBs, so maybe not as many balls in the air, but over the years this staff has shown they will make use of the best players and options for team success whether that be on the ground or through the air. Looking forward to the season starting.

Month and a half?

That Goff for Robinson trade will be interesting to evaluate in a few years.

I hope that the receivers improve, they have digressed the past couple of years and it will be good to see an increase in production.

“digressed the past couple of years”?

The WRs (&QB) had one their best years in ages 2 years ago, not that we ended any better than the year before under the coach that couldn’t do anything right.

Last year was a major digression across the board for so many reasons but just one year with almost the youngest team in the country. Maybe doesn’t make a difference this year when others are loading up on super-seniors but should pay off in two. That would also coincide with the staff having time to work through a full year of preparation.