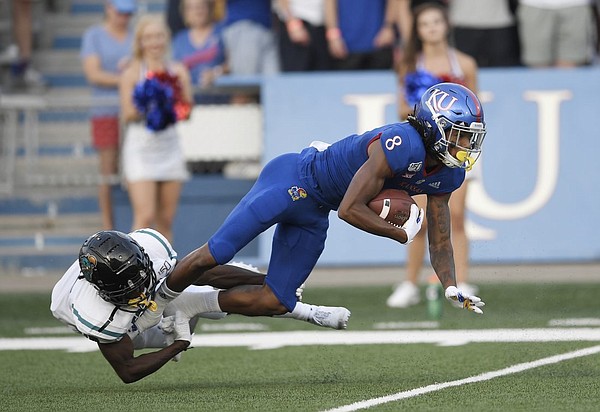 Even by college football standards, this has been a very long offseason. But game day has finally arrived for the Kansas football program, which will begin Year 2 of the Les Miles era at 9 p.m. at David Booth Kansas Memorial Stadium.

It has been 287 days since the Jayhawks walked off the field following a 61-6 loss to Baylor to end a 3-9 campaign in 2019. Yet all of KU’s focus as of late has been trying to avenge last year’s 12-7 defeat to Coastal Carolina in the 2020 season opener.

There has been plenty of content on this battle between the Jayhawks and the Chanticleers posted on our site all week, so I encourage you to go check all of that out before settling in for a late kickoff.

Make sure to also follow our live game blog throughout the contest, as well our entire team on Twitter: @KUSports, @BentonASmith, @mctait and @SJacksonLJW.

Before you do all that, though, I wanted to write down some of my final thoughts on this game. Feel free to post your own thoughts and predictions for the game in the comments section, as well.

How will Covid-19 impact the personnel for both teams?

In all honesty, I couldn’t imagine having too much confidence in my picks (straight up or against the spread) this year. And a lot of that has to do with what Coastal Carolina head coach Jamey Chadwell said during his weekly availability with reporters via zoom.

“You don't know who is going to show up,” Chadwell said. “You don't know if Pooka (Williams) has the virus or if the quarterback has got the virus. You don't know any of us that's going to have it. Until you get there, and really see who they have, then you will have an idea of how they are going to try and attack you.”

Chadwell already admitted that one of his players in the front seven would be unavailable because that player has been in quarantine. But my guess is that we won’t really know who is available for each team until kickoff, or at least as close as possible to it.

So we can dive into the numbers and focus on key matchups, but it could all be thrown out the window depending on who can play on a weekly basis. Maybe it won’t end up being an ongoing issue, but it certainly is one worth monitoring for the time being.

Are we underestimating the late kickoff for Coastal Carolina?

The late kickoff has certainly been a talking point ahead of this game, and both teams have prepared for it in their own way.

“We had a late-night practice,” senior right guard Trey Carter said. “I think it was last Friday, when we had a 10 p.m. practice until like 12 or something like that. So we've prepared for that. We are ready for the late-night kickoff."

Maybe I’m just getting old, but consider me skeptical.

It’s obviously going to impact both teams, but I wonder if we are downplaying what it does to Coastal Carolina. This is a team in Eastern Standard Time, so it will really be a 10 p.m. start for the players’ body clock. It will be later than 1 a.m. their time when the game is wrapping up.

It might be nothing when the Chants get under the bright lights, but it wouldn’t be that surprising if they were somewhat impacted either.

I already wrote about why I’m intrigued about the matchup between KU’s defensive line and Coastal Carolina’s offensive line, so let’s focus on the other side of the trenches real quick. While Coastal Carolina is vulnerable in the secondary, the front seven figures to be one of the better groups in the Sun Belt conference this season.

Defensive end Tarron Jackson, in particular, set a Coastal single-season record with 10 sacks a season ago. He led the team and ranked fifth in the Sun Belt with 13.0 tackles for loss. Defensive tackle C.J. Brewer ranked third on the team with 54 total tackles last year, which included 16 solo stops.

The Jayhawks, meanwhile, will have to replace left tackle Hakeem Adeniji after losing him to the NFL. Seniors Malik Clark and Chris Hughes are the main returners up front after making a combined 19 starts last year.

If the returners can help KU’s o-line hit the ground running, it could allow running back Pooka Williams to get going against a Coastal defense that held him to 99 yards on 22 carries in last year’s meeting.

The Jayhawks will get a boost on the defensive side of the ball with the return of Prox. The junior linebacker was having a breakthrough season last fall before a shoulder injury ended his season after just four games.

Even in only four contests, Prox finished with 39 total tackles and 2.5 stops for a loss. He also forced a fumble. Prox posted nine or more tackles in each of his first four games, which included an 11-tackle showing against the Chants.

Prox should have his name called plenty of times in his first game back since last September.

Final Vegas update: Why I'm confident in the over

As of Saturday morning, Kansas was a 6.5-point favorite via FanDuel’s Sportsbook with an over/under of 55.5 total points. The line initially opened at about 3.5 points on most sportsbooks, but quickly jumped even more in KU’s favor.

I’ve already given my prediction for this game, but I’m more confident in betting the over in this one. Last year’s game didn’t come close to this number, but both offenses should be much better. More importantly, I don’t think either defense will be any good and I certainly wouldn’t expect them to have the edge out of the gate in a pandemic-adjusted offseason.

Translation: Take the over with confidence and enjoy your Saturday night.

What sort of impact will Covid 19 have is a fair question. Everyone has to deal with it but unlike the weather it won't necessarily impact teams equally. For what it's worth, K-State and Iowa State both lost their openers to lesser opponents.