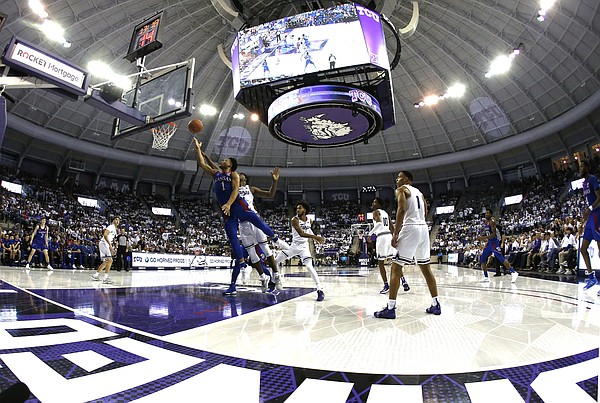 Kansas guard Devon Dotson (1) gets inside TCU guard Edric Dennis (2) to score a basket during the second half of an NCAA college basketball game, Saturday, Feb. 8, 2020 in Fort Worth, Texas. Kansas won 60-46. (AP Photo/Ron Jenkins) by Associated Press

In the final home game of the season, No. 1 Kansas has a chance to once again celebrate a Big 12 crown.

The Jayhawks can clinch a share of the league title with a win over TCU on senior night on Wednesday. Baylor actually dropped a 75-72 decision to TCU last weekend, while Kansas held on against Kansas State in Bramlage Coliseum.

It opened the door for KU (26-3, 15-1 Big 12) to have the opportunity to take care of business at home after not winning the conference title last year. But obviously the Jayhawks hope to win both games this week to come away with the outright crown.

TCU (16-13, 7-9 Big 12) has defeated both West Virginia and Baylor over the last three games. After losing six games in a row at one point, the Horned Frogs have won three of their last five contests to keep their NCAA Tournament hopes alive.

According to KenPom, Kansas has a 94% chance of victory, with a projected score of 72-55 in KU’s favor. Kansas is 19-2 all-time against TCU in this series. Dating back to February of 2013, the Jayhawks have won five straight and 15 of the last 16 meetings against the Horned Frogs.

Tipoff is slated for 7 p.m. 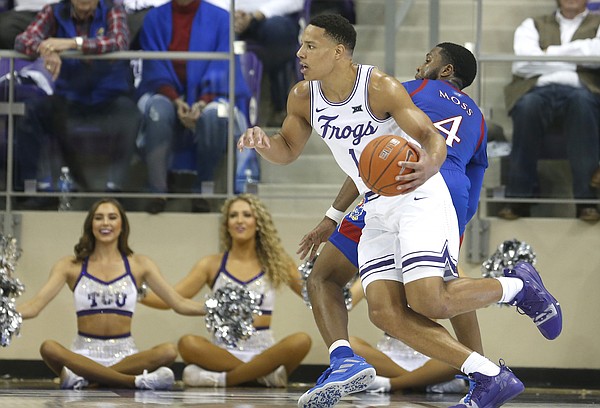 TCU’s leading scorer has been even more dynamic as of late.

Bane is coming off a 23-point performance in a 75-72 win over Baylor this past weekend. It earned him some recognition, too, as Bane was named co-player of the week in the Big 12 along with Andrew Jones of Texas. Banes scored 19 of his 23 points in the second half against Baylor and finished with 22 points against ISU.

This season, Bane is averaging 16.1 points per game on 44.6% shooting from the floor. He has reached double figures in all but three games during Big 12 play.

As expected, Fuller has had his growing pains during his true freshman campaign. But he’s coming off a good week.

Fuller finished with a career-high 21 points on 7 of 12 shooting in TCU’s upset victory over No. 2 Baylor. Because of the performance, Fuller earned Big 12 newcomer of the week honors earlier this week.

Fuller scored a total of 20 points through his first 10 league games. Since then, Fuller has three double-digit outings over his last seven contests.

PJ Fuller leads the Frogs with 17 points and Kevin Samuel recorded his sixth double-double with 10 points and 11 rebounds. #GoFrogs pic.twitter.com/fO3URQx3Mv 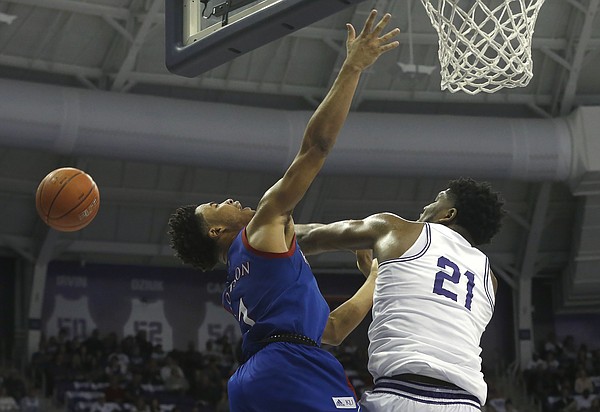 Samuel was completely eliminated in the first meeting with KU, though that is usually not the case.

In a 60-46 loss to Kansas on Feb. 8, the TCU big man did not score in 30 minutes of action. It was his worst offensive rating (44.7) of the month. Since then, Samuel has scored at least 6 points in four of the last six games. He even poured in 19 in a win over West Virginia.

For the season, Samuel is scoring 10.2 points per game to go along with 8.6 rebounds and 2.8 blocks per contest.

ONE THING TCU IS GOOD AT

TCU has been able to get extra possessions thanks to its success on the offensive glass. The Horned Frogs rank 39th in the country with an offensive rebound rate of 32.8% this season.

ONE THING TCU IS BAD AT

The Horned Frogs are not great at taking care of the ball this year. They have posted a turnover rate of 21.6%, which ranks 319th in the nation.

The Jayhawks are 16.5-point favorites for their final home game of the season. Considering Udoka Azubuike’s status is still uncertain, that is a steep price to pay. I think KU will win comfortably and clinch a share of the Big 12 title, but getting key players healthy for the postseason is more important now.