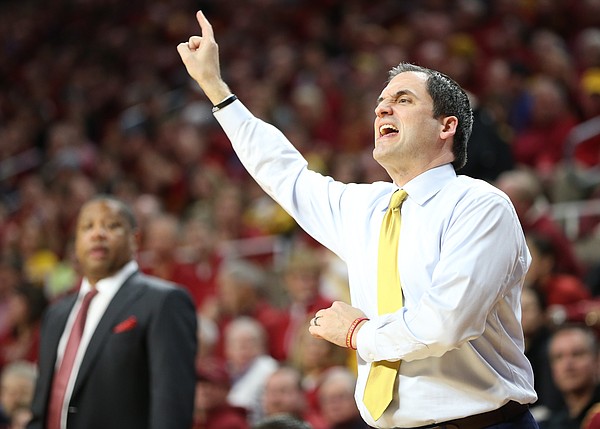 Iowa State head coach Steve Prohm gets the attention of his defense during the first half, Tuesday, Feb. 13, 2018 at Hilton Coliseum in Ames, Iowa. by Nick Krug

Things don’t get any easier for the Kansas men’s basketball team.

After defeating West Virginia in the Big 12 opener, No. 3 Kansas (11-2, 1-0 Big 12) will head to Hilton Coliseum to square off with Iowa State for its first conference game away from home. The road tilt is also just days before KU welcomes No. 4 Baylor this weekend.

While Iowa State (7-6, 0-1) might be down this year, winning in Ames, Iowa is no guarantee for the Jayhawks. Kansas is only considered a 4.5-point favorite via FanDuel’s Sportsbook as of Wednesday afternoon.

The KU-ISU contest will feature the top-two scoring offenses in the Big 12 with Iowa State at 80.2 points per game and Kansas at 79.5 points per outing. The two teams also rank first and second in field goal percentage with KU at 50.9% and ISU at 46.4%.

Kansas leads the overall series with Iowa State, 182-66, but the teams have split the last 10 meetings (5-5). ISU has won two of the last three matchups.

Tipoff is slated for 7 p.m.

Haliburton is playing on another level in his sophomore season.

None by Courtside Films

Bolton had registered double figures in nine of 13 games for Iowa State to start his sophomore season.

Entering tonight’s matchup, Bolton is averaging 14.8 points and 2.8 assists per game. He leads ISU with an 85.9% clip at the free throw line. Bolton scored a career-high 29 points against Florida A&M earlier this season.

Bolton, a transfer from Penn State, has scored 19-or-more points in four of the last seven games.

None by Iowa State Men’s Basketball

Young has missed 40 games due to a number of injuries. In fact, the redshirt junior is back after taking a medical redshirt a season ago after playing in just four games. Young had groin and shoulder surgery.

This year, Young has reached double figures in six games after doing so just 10 times his first two-plus seasons. Young is posting an average of 9.2 points and 3.6 rebounds per game for the Cyclones.

Solomon Young with the steal and bucket! pic.twitter.com/TvavAu0klh

None by Iowa State Men’s Basketball

Jacobson is back for his senior season, posting an average of 8.1 points and 6.4 rebounds per game.

A season ago, Jacobson was one of two Iowa State players to start all 35 games. Jacobson needs just 164 points to reach 1,000 in his career. According to KenPom, Jacobson is nationally ranked in rebound percentage on both the offensive and defensive end.

“I want to be remembered as a guy who played his heart out and is loved in the community.” - Michael Jacobson, @CycloneMBB#Cyclones | #ChampionsForLife pic.twitter.com/ay10psbP4k

None by Champions For Life

The Cyclones are coached by Steve Prohm, who is 90-59 in his fifth season at ISU and 194-88 in his ninth season overall.

ONE THING IOWA STATE IS GOOD AT

The Cyclones have an efficient offense, particularly on shots inside the 3-point line. Through 13 games, Iowa State is shooting 55.1% on 2-pointers and that number ranks 21st overall on KenPom.com.

ONE THING IOWA STATE IS BAD AT

ISU has struggled to run opposing teams off the 3-point line this season. Opponents are shooting 36.1% from long range against Iowa State, a defensive mark that ranks 283rd in all of college basketball.

Kansas is just a 4.5-point favorite on FanDuel’s Sportsbook as of Wednesday afternoon. For context, KenPom projects KU to earn a 76-69 road win over Iowa State tonight. I know the Jayhawks struggled away from home last year, but I tend to side with KenPom here. I’m laying the points in this one.