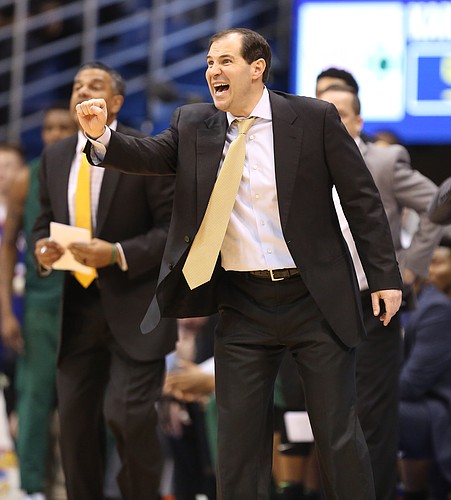 Baylor head coach Scott Drew tries to get the attention of his players during the second half, Wednesday, Feb. 1, 2017 at Allen Fieldhouse. by Nick Krug

This is what college basketball is all about.

Despite it being early in Big 12 play, there is already a top-five matchup taking place that could ultimately impact the conference race. No. 3 Kansas (12-2, 2-0 Big 12) is slated to host No. 4 Baylor (12-1, 2-0) in a Saturday afternoon matchup that will be broadcasted on CBS.

In some ways, it is strength vs. strength. Kansas is the top-scoring team in the Big 12 at 79.4 points per game. Baylor is first in the conference in scoring defense, allowing just 58.4 points per outing. KU is first in scoring margin at +18.4, while BU is second at +15.9.

The Jayhawks have fared well in these situations, however. KU has won nine-straight contests against AP top-five foes in Allen Fieldhouse, with eight of those under Bill Self. Baylor, meanwhile, has never won at Allen Fieldhouse (0-17) or defeated an AP top-five team in a road game in 22 such attempts.

Butler has paved the way for Baylor’s offensive attack through the early part of the season.

Entering this weekend, Butler is averaging 16.3 points in 28.9 minutes per game. Butler was named Myrtle Beach Invitational MVP and picked up Big 12 Player of the Week honors on Nov. 25.

As the only other Bear averaging double figures, Teague is posting 14.5 points per contest for a one-loss Baylor squad.

Teague can make shots from deep. In fact, he had his streak of 37 consecutive games with a made 3-pointer snapped when he went 0-for-2 from downtown in Baylor’s win at Texas Tech last time out. He’s made multiple 3-pointers in 30 of his last 38 games.

This season, Teague ranks ninth in the Big 12 in scoring and sixth in 3-pointers per game with an average of 2.2 triples per outing.

Today's @BaylorMBB Play of the Day against UCA, MaCio Teague going Coast-to-Coast and putting the defense in the #SpinCycle. pic.twitter.com/XS4IXQ1Ucg

None by Jack Allen

Gillespie has grown into his starting role for the Bears, providing consistency in the lineup.

Gillespie has started 22 of the last 25 games since entering the starting lineup on Feb. 9, 2019 against Kansas State. Since then, Gillespie has been a force on the glass and provided consistent scoring as well for the Bears.

Through 13 games, Gillespie has five double-doubles and he is also tied for the Big 12 lead with eight double-digit rebounding games. He also ranks third nationally in offensive rebounding with an average of 4.3 rebounds per game.

Coaches: Here is an example of a “Dagger 3” off an offensive rebound & is a killer for a defense. It must be trained & in your DNA. Here’s ⁦@BaylorMBB⁩’s Freddie Gillespie in action. ⁦@SynergySST⁩ pic.twitter.com/dwSWvdJBcV

ONE THING BAYLOR IS GOOD AT

ONE THING BAYLOR IS BAD AT

Look for Udoka Azubuike to have a big day as a rim protector, because Baylor has struggled in that area thus far. Opposing teams have posted a block rate of 12.9% against the Bears, which is 344th in the nation via KenPom.

Kansas is an eight-point favorite on most sportsbooks as of Friday night. That number seems too high for me, considering this should be a low-scoring affair. Baylor just won at Texas Tech, so it has to have confidence playing on the road. It also remains to be seen how the weather will impact the crowd in Allen Fieldhouse. Give me the points, but I think the Jayhawks win this one.