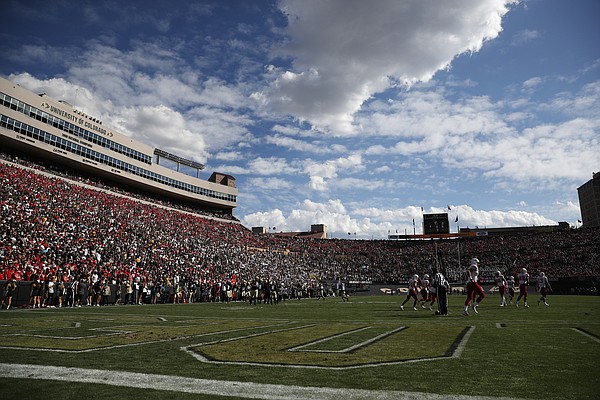 Cloud over Folsom Field in the second half overtime of an NCAA college football game Saturday, Sept. 7, 2019, in Boulder, Colo. Colorado won 34-31 in overtime. (AP Photo/David Zalubowski) by Associated Press

I will not stand for this Week 3 slander.

Sure, there are no marquee games this weekend due to the fact that there won’t be a matchup between ranked teams. But this is college football. After a long offseason of no football, I will take as much of it as I can get.

Plus, when you have action on so many different games every week, then football will never be boring. At least that is what I tell myself on a weekly basis when I’m invested in a number of games at both the collegiate and professional level due to these picks.

In the third edition of this blog, the KU sports staff will give six more picks against the spread.

Sports editor Matt Tait will try to bounce back from an 0-6 showing last week, as he and Braden Shaw are tied at 4-8 through two weeks. Kansas football beat writer Benton Smith, who will be at Boston College for KU’s first road game, is in second place after another solid week. You can see the full standings at the bottom of this blog.

Before that, I will give you six additional tips as I do every week. Most of all, though, let’s make the most of another weekend of football. Good or bad, you will be missing this come next April.

Last week, the best bet hit on an underdog that was surprisingly being given 14 points when California won outright in a 20-19 victory at Washington. Once again, I’m surprised that a 14-point spread hasn’t moved and I’m all in on Northern Illinois to cover this weekend.

Nebraska beat South Alabama by 14 points in the first week before suffering a 34-31 overtime loss at Colorado. Northern Illinois (1-1) just held Utah running back Zack Moss to 80 rushing yards, so this defense should be able to handle a Nebraska team averaging just 3.1 yards per carry.

The last time I leaned on the look-ahead game narrative as my long shot, LSU thrashed Georgia Southern in Week 1. But I’m diving back in, as Georgia will surely be cautious this weekend with a matchup against Notre Dame looming. Arkansas State head coach Blake Anderson flying to UNLV was also easily the best story in college football last weekend. Following that 43-17 win, I’m confident that the Red Wolves will do enough to cover against the Bulldogs.

Over of the week: Oklahoma State scoring more than 39 points

Now that the season is two weeks in, things are starting to become more clear and prop bets are more appealing. Oklahoma State, which has scored at least 52 points in each of the first two games, has an over/under of 39 total points on FanDuel for this week’s matchup at Tulsa.

The Cowboys, who are favored by 14 points in Week 3, have the ninth-best scoring offense in the country. The last time OSU was held under 44 points in a nonconference game was in a 30-27 loss to Central Michigan on Sept. 10, 2016.

Under of the week: Total score (58) for Florida State at Virginia

Virginia (2-2) is favored by 7.5 points, despite having just three wins against Florida State in the history of this series. The Seminoles (1-1) are giving up almost 200 rushing yards per game, which sets things up nicely for Cavaliers’ quarterback Bryce Perkins, who produced 46 missed tackles in 2018 to rank second among Power Five quarterbacks.

UVA has an average time of possession of 35:28 through two weeks, and I wouldn’t be surprised if the hosts try to control the clock in this one to make the total score much lower than 58 points.

There is a chance fantasy fans are backing off Michel after after he was held to just 14 yards on 15 carries in New England’s thrashing of Pittsburgh. But this is the Patriot way, and Michel is primed to bounce back in a game that his team should win by any score it wants to against Miami. Baltimore ran the ball 46 times for 265 yards in the blowout win over the Dolphins, so Michel should have huge workload this week and more scoring opportunities.

Bowman has picked up where he left off from his 2018 freshman campaign, throwing for 713 yards on a 71-for-99 effort through two games. Over his nine career starts, Bowman has eclipsed the 300-yard mark five times with all four exceptions being contests where he left the game early either due to injury or a large lead.

Arizona, which is considered two-point underdogs at home in this game, is giving up 8.7 yards per play during its 1-1 start to the season. Bowman could have a big night to give the Red Raiders a victory in their first road game under Matt Wells.

(Lines via FanDuel's Sportsbook as of Tuesday afternoon)

I'm with you on Arkansas State. I saw that line earlier this week and couldn't believe it. UGA is definitely a top 5 team, but just historically they don't run up the score on anyone. And ArkSt is not a horrible team. I also think Kansas State is going to give Miss St all they can handle, if not beat them out right. Thanks for the column, it's always a fun read!

Thanks for reading! That Kansas State game was the toughest college game for me to pick, so I can definitely see your point.