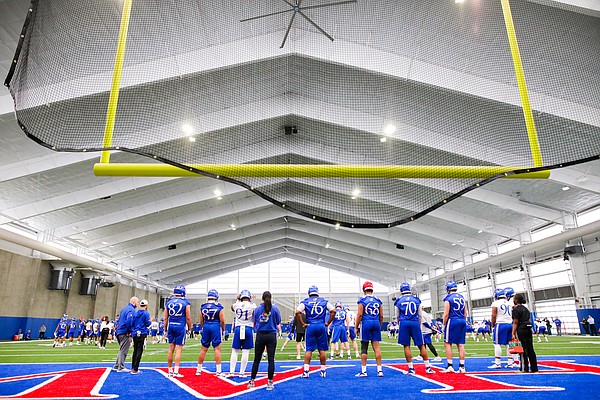 Kansas players line up in front of the south upright during football practice on Wednesday, March 6, 2019 within the new indoor practice facility. by Nick Krug

Year 1 of the Les Miles experience is a little over two weeks away.

While fans are eager to see what happens in Miles’ debut as head coach of the Kansas football team, there is still a level of uncertainty regarding this program. Miles has been understandably quiet about any specifics of his team, so it will be interesting to see how things unfold in the season opener.

The Jayhawks certainly can’t afford to overlook anyone, especially an FCS foe in Week 1. KU suffered an overtime loss to Nicholls in the opening week just last year before eventually finishing with a 3-9 clip.

An early betting line suggests that this year’s matchup in the first week won’t be a cakewalk either. According to Unibet, Kansas is just a 3.5-point favorite over Indiana State in the 2019 season opener, which will take place at 11 a.m. on Saturday, Aug. 31.

Some might be surprised by that line, but there are multiple factors that could have led to it. For starters, of course, starting running back Pooka Williams Jr. will serve his one-game suspension that week. Williams was not available against Nicholls last season.

Indiana State is also no joke. The Sycamores were the No. 1 team in fewest turnovers lost last year, and they return nine starters back on the offensive end. Quarterback Ryan Boyle threw just three interceptions last fall.

Last season, the Jayhawks thrived off miscues by their opponents. They led the Big 12 in 27 takeaways forced, a number that ranked eighth in the nation among all FBS teams. But teams with such high takeaways numbers have historically fallen back to the pack the following year.

ISU is also ranked No. 16 overall in the STATS FCS Preseason Top 25 poll after going 7-4 last season. For context, Nicholls is currently ranked No. 12 in that same preseason poll.

Does this mean that the early betting line is correct? Well, not necessarily.

S&P+, developed by Bill Connelly of ESPN, is giving Kansas more respect than the betting line. According to S&P+, KU is projected to win by 10 points and has a 72% chance of pulling off the victory against Indiana State.

The Jayhawks should also be able to run the ball, even without their best player. The Sycamores surrendered 197.6 rushing yards per game last year, meaning Khalil Herbert and Dom Williams could have huge performances.

In 2015, which was the first year with David Beaty at the helm, Kansas was just a three-point favorite over South Dakota State. The Jayhawks ended up losing in his debut by a 41-38 margin. In his final season, KU was a six-point favorite over Nicholls before losing that game outright.

Obviously, with Miles in charge, the expectation is that the Jayhawks will do better. Still, it is certainly reasonable to have questions about whether or not that will be the case in his first season.

I do not know enough about Indiana State to give advice on this early line, so I’ll wait until it gets closer to kickoff to make my official prediction. My initial thought is to hammer the KU side. Given many of the factors I have stated, though, it wouldn’t surprise me if more sportsbooks end up having a similar line as we get closer to Week 1.

The reality of betting is that while it does have some basis in expected performance, the even more has to do with the bookies making money and limiting their losses. If there’s a lot of betting on one side of the line, then the line changes to balance out the betting. It’s not usually a matter of one team becoming significantly better during the week.

It’s good to know some info about the team. They’re a top FCS team with lots of O returning that takes care of the ball. Better info than the betting line would be who did they beat/loss to last year.

The blog I linked to was about turnovers gained. At the FBS level, history would suggest those teams fall back to the pack. I'm not sure if there is a similar pattern at the FCS level, my guess is that there is. But that many returning starters on an offense that took care of the ball last year is worth noting.

The Missouri Valley has become quite the nemesis in recent years. Two losses in football and three tournament losses in basketball. I guess they are still bitter about our leaving.

K U should destroy Indiana St. Even without Pooka.