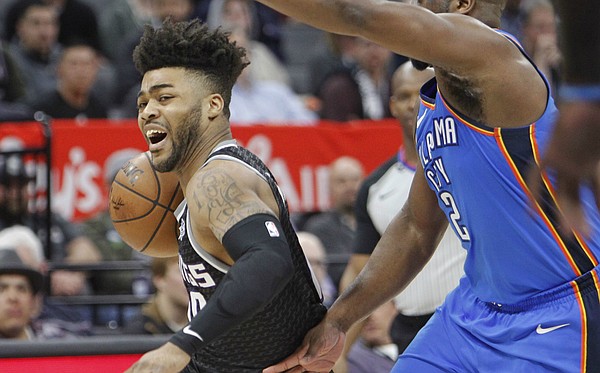 A heel injury sidelined Frank Mason III for 21 games, but the rookie point guard out of Kansas finally returned to the Sacramento lineup Thursday night.

Playing, for now, on a minutes restriction, Mason provided glimpses of what the Kings can expect out of him the remainder of the season. And, unlike when he last played in late December, Mason now can feel like a real part of his team’s plans.

With no realistic shot of making the playoffs, coach Dave Joerger and the organization made a shift in January, deciding to give more minutes to Sacramento’s youngest players in the final months of the season. While Mason was injured, the Kings traded away veteran point guard George Hill, too, leaving the roster with just two true point guards: Mason and lottery pick De’Aaron Fox.

Eighth-year guard Garrett Temple started in place of an ailing Fox, who missed Thursday’s game, against Oklahoma City. But the Kings clearly were trying to avoid putting too much on Mason too soon.

The second-round pick from KU had a modest return, giving the Kings 6 points (1-for-3 shooting, 4 of 4 free throws) and 2 assists with no turnovers in close to 16 minutes.

Mason watched the first 8:59 of the first quarter from the bench, before checking in to be greeted with cheers from the home crowd, but also a 22-point deficit.

It didn’t take long for Mason to look comfortable, surveying the floor on the move and finding Buddy Hield wide open for a 3-pointer within a minute of joining the action.

The rookie point guard flashed his speed in the opening minute of the second quarter, sprinting down an inattentive Alex Abrines to smack away the Thunder guard’s dribble on a fast break for a steal that prevented a layup.

Soon after, Mason added another assist by, predictably, being way too fast off the dribble for OKC veteran Raymond Felton to handle him. Mason drove to the paint, forced the defense to help and knew all along he had Hield standing on the opposite wing, waiting to knock down another open 3-pointer.

Pushing in transition on the next possession, Mason again attacked Felton, getting past him, but had to alter his layup into a difficult reverse when Patrick Patterson caught up to help. The lay-in wouldn’t fall but Mason’s aggressive approach benefited the Kings as Skal Labissiere was able to tip it in.

Mason checked out with 8:22 left in the first half and his team down 16 points. The margin had been erased and Sacramento led by 5 by the time the Kings’ reserve ball handler next checked in, with 10:27 remaining in the fourth.

Trusted for seven minutes worth of running the team in a tight game, even though he was coming off an injury, Mason helped Sacramento maintain its lead. Though his first few defensive sequences in the fourth went awry, with him fouling Felton, setting up an and-1, and later getting leveled by a Steven Adams screen (a teammate should’ve altered him to the New Zealand wall he was about to run into), allowing Felton to score again to tie the game at 92, Mason responded by blowing past Felton for a layup.

Later, Mason matched up one-on-one with reigning MVP Russell Westbrook on the perimeter and played so sound defensively that even the most aggressive offensive player in the NBA couldn’t find an angle to get to the paint and had to pass the ball away, resulting in a turnover.

The 5-foot-11 point guard capped his return by attacking the paint off the bounce, and drawing a foul on Adams en route to two made free throws, ahead of checking out with his team up three with 3:20 to go, in what would become a 110-107 loss for the Kings.

In the 24 games to come on Sacramento’s schedule, Mason is expected to play an even larger role, according to Jason Jones of the Sacramento Bee.

While Fox, the No. 5 overall pick out of Kentucky, is considered more of a franchise player and will get more minutes than Mason once he returns to health (pink eye), Sacramento appears committed to playing both rookies in order to give them the experience they need.

Averaging 7.5 points, 2.9 assists and 2.1 rebounds in 18.4 minutes through 30 appearances this season, look for all of those numbers to go up in the weeks ahead, as Mason tries to cement himself as one of the rebuilding franchise’s building blocks.

What a great dude and a great ambassador for KU! I can't stress enough how Frank is a glowing example of what hard work and dedication can do for a person. KU Nation should be proud as can be of this young man! Keep it up Frank! YOU DA MAN!!! BIFM!!!!