Kelly Oubre Jr. talking a big game before his NBA career even begins 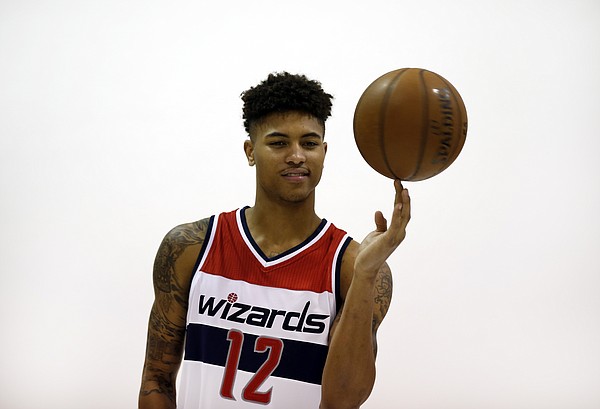 Washington Wizards' Kelly Oubre Jr. spins the ball on his finger during a portrait session for team photographer Stephen Gosling after an NBA basketball news conference, Friday, June 26, 2015, in Washington. Washington moved up four spots in the first round to get the Kansas freshman in a trade with the Atlanta Hawks, who selected Oubre with the 15th overall pick in the NBA draft the night before.. (AP Photo/Alex Brandon

The newest Kansas basketball player to join the ranks of the NBA, Kelly Oubre Jr. doesn’t appear to care about making any friends before his first season.

The Washington Wizards acquired the one-and-done small forward on draft night from Atlanta, and since describing himself as a jewel during ESPN’s live coverage, the brash 19-year-old hasn’t let up.

Fourteen different organizations passed on Oubre before Atlanta took him for Washington at No. 15. According to the 6-foot-7 wing (who didn’t call any of his fellow draftees out by name), he is a better player than No. 1 pick Karl-Anthony Towns, No. 2 pick D’Angleo Russell, No. 3 pick Jahlil Okafor and so on, and so on.

“I have confidence in myself, so I believed that I was a top-10 pick from the get-go,” Oubre said in a piece from The Washington Post’s Scott Allen. “I don’t think that there’s 15 guys, or however many guys, that are better than me.”

“A lot of guys that went in front of me, I know I’m better than.”

According to The Post, Oubre at least said in a Monday radio interview that he has respect for some specific players selected before him: Minnesota’s Towns, Philadelphia’s Okafor and Detroit’s No. 8 pick, Stanley Johnson.

Then he went right back to talking a big game:

“It’s a kill or be killed world, and I feel like I can do a lot of killing in this world.”

Oubre couldn’t resist himself on Washington’s 106.7 The Fan.

Keep in mind all of this came a few days after he said the following when asked about his relationship with Oklahoma City’s Kevin Durant, the 2013-14 NBA MVP:

“We’re competitors,” he said. “I’m not enamored with who he is. That’s Kevin Durant, but I’m Kelly Oubre.”

Oubre on Durant: "We’re competitors and I go against him. I’m not enamored with who he is. He’s Kevin Durant but I’m Kelly Oubre."

None by Jorge Castillo

It seems the more Oubre talks, the less his peers — and ample pool of superiors — will find themselves enamored with him. He could’ve entered the league quiet, humble and hungry. At some point in the past few months, he decided to take another route.

Talking himself up to this extent wouldn’t even go over well if Oubre left college as a can’t-miss prospect. He’s far from that.

In his one season with the Jayhawks, Oubre averaged 9.3 points and 5.0 rebounds in 36 games, while making 44.4 percent of his shot attempts and 35.8% of his 3-pointers (34-for-95). A bad season? No. But he wasn’t exactly impressing decision-makers at the next level, either.

Oubre’s time at KU and how his game translates to the NBA both came up in a post-draft Grantland podcast from ESPN’s Ryen Russillo and Chad Ford. According to draft insider Ford, some scouts came away from watching Oubre at Kansas and asked, “What exactly does he do well again?”

One NBA general manager, after seeing how much the svelte perimeter player with the 7-foot-2 wingspan got by on raw athletic ability and instincts, went so far as to describe Oubre to Ford as a “basketball illiterate.”

However, Ford travelled out to Santa Barbara, California, before the draft to see Oubre and other top prospects as they trained at the popular P3 facility. Ford left impressed with Oubre’s dedication to improvement, which included three-a-day training sessions and basketball video breakdowns at night.

While Ford predicted a “rocky start” for Oubre as a rookie, he thinks his future could look a lot brighter — if he continues to put in the requisite work.

“If he develops,” Ford said, “the Wizards got an absolute steal at 15.”

On Monday, Oubre responded to the “basketball illiterate” comment during his radio appearance on The Sports Junkies.

If Oubre wants to one day live up to all of his own propaganda, the gym would be a great place to start, because each of the 14 players drafted ahead of him — and any veteran who finds him a little too cocky — will go out of his way to remind the Wizards rookie of how far he has to go.

Talk like this is very, very unbecoming. Look at Wigs. He's been the consensus number one player in high school, been on the cover of Sports Illustrated, picked number 1 in the draft, won Rookie of the Year...and he hasn't run his mouth like this at all. He knows how to handle fame and expectations.

Kelly, on the other hand, is trying to talk his way into being a good player. There really is no upside to being so cocky. What if he does go on to be an All-Star someday and is the best player from the 2015 draft? Is he going to feel better by telling everyone "I told you so!"? On the flip side, if he doesn't go on to win championships and be a "jewel", then he just sounds foolish. Whatever, I've just always been a fan of letting one's game do the talking. He's got a roster spot, he's got his money, he's got his shot... What does being cocky accomplish?

I hear an echo from Forest Gump.

Usually, as someone who coaches, I tell players to be humble, but if he is willing to put in the work to back up all the talk, get better everyday, put in the extra hours of hard work, practice and sweat to be the best, then so be it. Walk the walk Kelly.

hahaha...after how he got clowned by WSU, just the nerve to make these statements. Wiggins is 10 times the player Kelly is and he didn't even say half of what Kelly is saying. Looks like Kelly is following the Lebron ideology...I’m a competitor. I’m not going to say another guy’s better than me, because I don’t feel that way. I'm guessing he's not going to shake the opposing players hands too now because he feels he's truly better than them.

Kelly, The Wizards are a steadily improving team and you can be part of something special! Put the talk and bravado aside and come to DC ready to learn, contribute, and just play!

Really, Kelly?!? Way to alienate teammates, fans and potential fans. So self-centered and so immature. You should step back and watch Andrew as a model of rookie behavior: humble, hard-working, eager to learn. Let your game speak, and otherwise-- Be. Quiet.

Who knows? He may have actually talked himself into going a couple spots higher in the draft, or maybe the opposite. Either way, this kind of attitude from any athlete, performer, or whatever other competitive pursuit you're involved in is actually pretty common. Like me, for example, I'm the best Scrabble player around. Hands down. Ya'll can't touch this... ;) Don't you guys remember all the Miami Heat players talking about how Mario Chalmers thought he was the best player on the floor at all times? With Lebron, Bosh, and D Wade out there with him!?! It's a mindset that drives some people to achieve their best. Once you say it, you have no choice but to work as hard as you can to back it up. Works for some, not for others. I hope it works for Kelly!

It's one thing to have the mindset that you're the best, and even to say so. Mario was never a self-centered windbag with nothing previous to show for it; he was pivotal in the 2008 national championship. Kelly's freshman year was nothing to write home about. He should play some games first before bragging about being 'all that and a bag of chips...' His "jewel of the draft" comment pegs the gag meter. I want him to do well, but this is not the way to impress.

I wish Kelly a long, successful NBA career and hope that his immature/bratty outbursts don't lose him respect and goodwill from players and fans. Maybe Coach Self, or at least Pierce or Gooden can get him to tone it down until he gets to show how well he can play in NBA games.