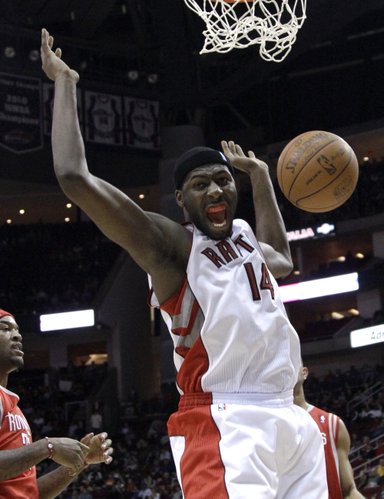 Toronto Raptors' Julian Wright (14) reacts after dunking the ball against the Houston Rockets during the first quarter of an NBA basketball game Friday, Dec. 31, 2010, in Houston. by Nick Gerik

Julian Wright became the latest former Jayhawk to attempt a comeback through the NBA Development League, as he signed a contract on Thursday and was picked up by the Austin Toros on Monday.

God is great! I'm excited for my opportunity with Austin Toros. I'm ready to get back to playing the game I love, at a high intensity!

Unlike KU’s other ex-NBA-player-turned-D-Leaguer, Greg Ostertag, Wright is in shape (a very positive thing for a professional athlete), and he’s not that far removed from his last NBA game. He played 52 games last season for the Toronto Raptors, he's only 24 years old, he seems motivated, oh, and he can do this:

And speaking of the D-League ...

Rookie Josh Selby was recalled from the Reno Bighorns on Monday and took part in Memphis Grizzlies practice. Selby played in four games with the Bighorns and started one. He averaged almost 22 points, six rebounds, three assists and a steal in 31 minutes.

Now that Selby and the Houston Rockets’ Marcus Morris have been called up, the only Jayhawks currently in the D-League (and without NBA teams) are Brady Morningstar (Tulsa 66ers) and Wright. 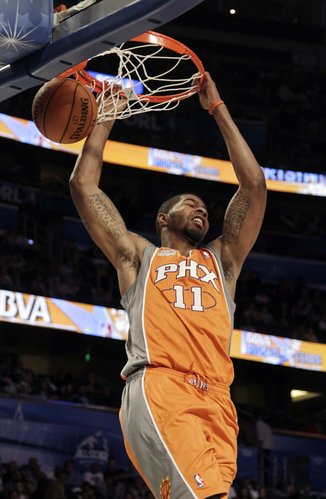 After the game, he jokingly told Suns.com:

“I’m mad that we lost. If they would’ve passed me the ball more, I would’ve hit more threes. But that’s how it happens, so we just had fun.”

Andrew Lynch of ValleyOfTheSuns.com had this to say about Markieff’s performance:

… his prowess at running aimlessly from one free throw line to the other, unencumbered by an offensive system, was unmatched. This wasn’t a game really designed for a player like Morris, whose bread and butter in the NBA has been knocking down 3s after a defensive breakdown, forcing the action in the post and being a nuisance on the defensive glass. Post play, after all, was non-existent; the only time a defensive player entered the paint was to corral a made basket and inbound the ball. And there were few rebounds to grab when both teams hardly missed a shot.

Usually mild-mannered on the floor with the Suns, Morris was even engaging the opposing bench in a little trash talk during Friday night’s contest.

“I told them I was going to hit five threes in a row,” Morris said grinning. “I got hit on my thumb and it didn’t look good so I had to come out of the game. (Shaq) wanted me to go off, but there weren’t enough balls to go around for me so it is what it is.”

And Markieff told the Arizona Republic that he got a vote of confidence from the big man-turned-commentator-turned-coach-for-a-night:

"Shaq said he liked my game and thinks I'm capable of doing great things in the league and to keep it up."

(If you missed the show, and want to watch for yourself, some enterprising soul uploaded the whole thing to YouTube.)

During the weekend’s endless media interviews, Suns.com asked other players (including fellow ‘Hawk Mario Chalmers) for their thoughts on Phoenix’s rookie:

The Arizona Republic also caught up with Markieff’s coach, Alvin Gentry, who said the rookie had a decent first half of the season:

"His feel for the game," Gentry said in identifying Morris' best traits. "Defensively, what he's done. His rebounding is still pretty good. Not so much the numbers but just that he's in there and rambling around and being physical. He's another guy that's hard to judge by his stat line. Just him being out there and the presence that he has helps us. He's gotten better with (defensive) rotations and things like that. We've asked him to guard some of the premier players and he's done a good job." 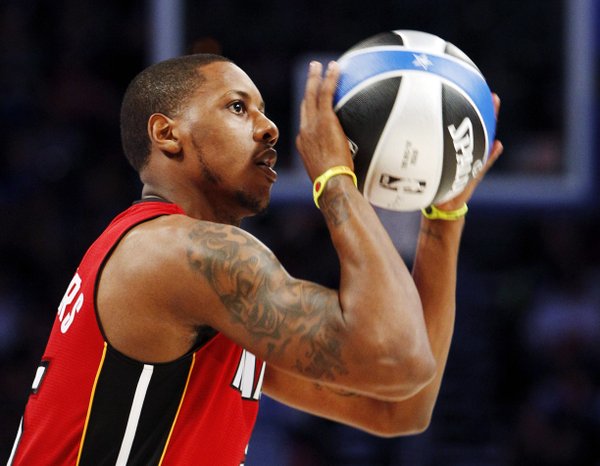 Mario Chalmers (Miami Heat) got off to a hot start in the Three-Point Shootout on Saturday night, putting up 18 points in the first round...

… but it wasn’t enough, as Chalmers ended up tied with Minnesota Timberwolves forward Kevin Love at the end of the round. Chalmers fell in a brief tiebreaker with Love, 5-4, and Love went on to win the whole shebang. 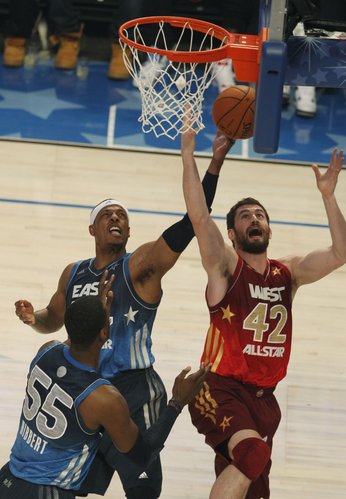 Western Conference's Kevin Love (42), of the Minnesota Timberwolves and Eastern Conference All-Star Paul Pierce (34), of the Boston Celtics go after a rebound, during the first half of the NBA All-Star basketball game, Sunday, Feb. 26, 2012 in Orlando, Fla. by Nick Gerik

Paul Pierce (Boston Celtics) went 1-for-8 and had just three points in 11 minutes during his 10th All-Star game, but he still tried his best to influence the outcome of the game for the Eastern Conference squad. From the Boston Herald:

The East had shrunk a 20-point deficit to one in eight minutes, and Paul Pierce got up off the bench and yelled for his team to foul Kobe Bryant, saying the Lakers star would miss one of the free throws. Bryant did clang the second with 18.1 seconds left, but the East couldn’t capitalize.

“I was just heckling him, that’s all,” Pierce said with a smile afterward. “Good friendly heckle going on between two rivals.” 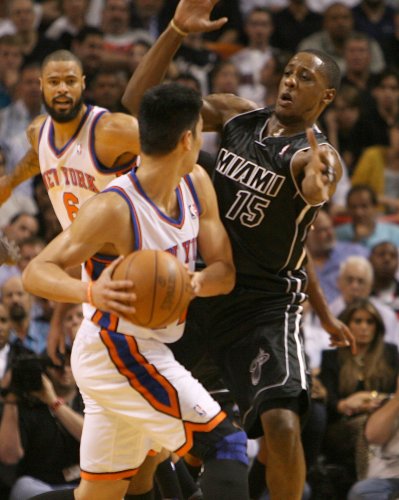 New York Knicks' Jeremy Lin pass the ball against Miami Heat Marios Chalmers during the first quarter of an NBA basketball game at the AmericanAirlines Arena in Miami, Fla., on Thursday, Feb. 23, 2012. by Nick Gerik

ESPN Stats & Information broke down the game further. While Chalmers was matched up on him, Lin shot 0-for-3 and committed four turnovers — one of which turned into a highlight play for Chalmers at the other end: 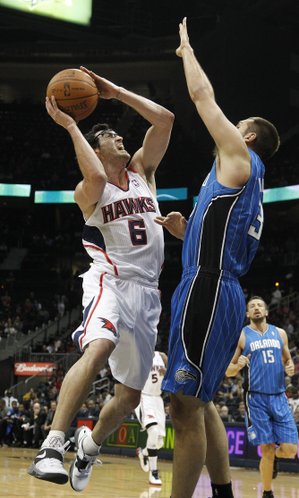 Atlanta guard Kirk Hinrich (6) drives against Orlando power forward Ryan Anderson (33) in the first half of an NBA basketball game on Thursday, Feb. 23, 2012, in Atlanta. by Nick Gerik 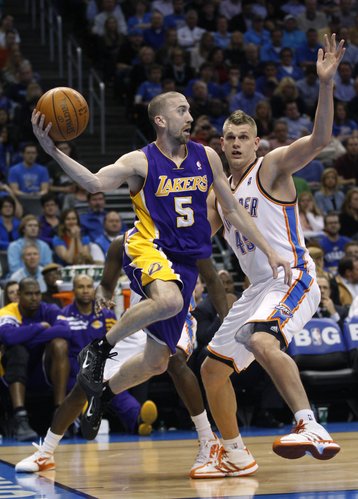 “I have to stay professional,” Morris said Monday. “I was in the wrong place at the wrong time. It’s still up in the air, so we’re just trying to get past it.

“It’s really still up in the air, so I don’t want to comment on it too much. I just want to move forward and just focus on basketball. It’s definitely a situation I can grow from, for sure.”

Some people thrive off of positive reinforcement. You know these people. You might be one of them. It’s a natural human condition. Chalmers is the opposite of that.

Your doubts fuel his soul.

We look at wingspan. He's 7-3 or so but only 6-9 plus. You don't block shots with your head or shoulders so wingspan is what we go by. Self prepared him very well. Very well. It's hurting him to not get the practices he would have in a regular scheduled season. But he's doing what I'd hoped.

Your write ups keep getting better and better. This one has tons of great info. Thank you for the vids and quotes!!

I agree very informative, worth while read.

Yeah, you're getting a rhythm now!

I recognize your voice.

The essence of this is the drama of these guys trying to go to the next level.

Stay with the drama and the challenge. Everyone that has ever left college identifies deeply with these guys trying to make it in the real world; that is the central hook of what you are doing.

Also creating a context around each player is very important. Feedback from management, from local media covering the player, photos, feeds, and your POV yield the context that makes this much more interesting than just sports news. This is reporting about individual expeditions into the unknown with great anticipation on the part of readers. How will it turn out for each player?

This is not a criticism at all, but what you are doing is kind of a real soap opera, rather than sports news. What is important is the near daily unfolding of the installments of each player's professional basketball life.

"These Are the Days of Our Basketball Lives"

Nick Collison's take on how he creates value for his team, so that he can stay around the game and on the payroll, is something you need to think about as you develop this.

What you can do that other sports writers are not in a position to do is: ask the guys how they are doing what they do and what it is they are trying to do? Not all will know. But that is important, too.

Think of each player you cover as a character in the soap opera "These Are the Days of Our Basketball Lives." Remember motivation is everything in characters. Motivation is what makes us understand them, so that our like of them, and our identification with them, can flower into a virtual relationship in their journey.

How do you keep from recycling clichés ?

After the game, he jokingly told Suns.com:

“I’m mad that we lost. If they would’ve passed me the ball more, I would’ve hit more threes."

Kief is not joking which is sad and I get that its a fake game but it just was uncomfortable to watch him on the floor standing at the wing and begging Rubio for a pass so he could jack up a 3, and everytime Rubio would motion for him to head for the basket he would just stand there. The reason he was drafted ahead of his brother was because he had a defined role and now that he has a shot at the bigtime he just wants to sit back and jack up 3s like his bro.

Selby jury is still out.

Ostertag was never a good athlete even in his early years...very sad seeing him make a go at it pushing 40.

Pierce - still a warrior. The man in other words.

Drew - the journeyman...When healthy he lives up to his salary.

Collison - as long as they keep paying ya..hey ride it out. This maybe the Thunders year.