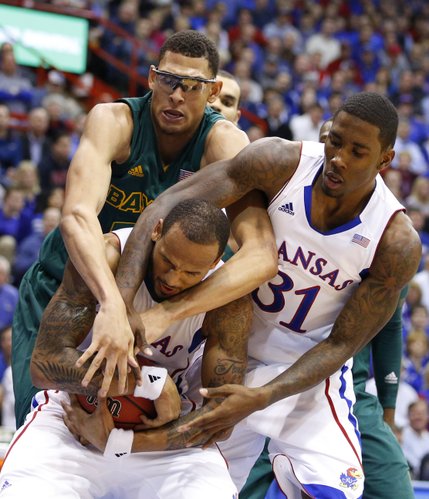 Kansas guard Travis Releford comes away with the ball as both Baylor center Isaiah Austin and teammate Jamari Traylor lock their arms around him during the second half on Monday, Jan. 14, 2013 at Allen Fieldhouse. by Nick Krug

• Three-point defense: It's been tough to shoot — much less make — threes against Baylor this year. Just 29.7 percent of the field goals taken against the Bears in Big 12 play have been threes (second-best mark in conference), and teams have made just 29.7 percent of those long-range tries.

• Interior defense: Behind Kansas, Baylor is the second-best shot-blocking team in the Big 12, rejecting 11.4 percent of opponents' two-point attempts during conference play. Big 12 foes have made just 45.2 percent of their twos against BU (third in conference), which is significantly lower than the NCAA two-point average (47.5 percent).

• Offensive rebounding: Baylor ranks 25th in KenPom's effective height measure, which takes into account the tallest two players on the floor at one time. That size allows the Bears to get quite a few offensive rebounds, as BU ranks fourth in conference play in offensive rebounding percentage, bringing down 34.2 percent of its misses.

• Forcing turnovers: Baylor plays passive defensively, only creating turnovers on 17.9 percent of its Big 12 defensive possessions (eighth). The Bears also don't come away with many steals, ranking ninth in the conference in that statistic.

• Getting to the free throw line: Baylor has a high number of players that rely primarily on jump shots while shying away from contact. This list includes starters Isaiah Austin, A.J. Walton and Brady Heslip along with top reserve Gary Franklin. Because of this characteristic, the Bears do not draw many free throw attempts, ranking ninth in conference play in offensive free throw rate.

• Getting shots blocked: Baylor has a high percentage of its two-point shots blocked, ranking seventh in conference play in offensive block percentage. This was illustrated in BU's first matchup against KU, when the Bears had 13 of their 42 two-point attempts rejected. Interestingly, only three of those blocks came from KU center Jeff Withey.

• Five-foot-10 point guard Pierre Jackson (No. 55) is one of the best offensive players in the Big 12. He's Baylor's go-to guy on that end, as he takes 28 percent of his team's shots when he's in (186th nationally) while also ranking 23rd nationally in assist rate. Jackson's shooting percentages are impressive considering the high volume of shots he takes, as he's comfortably above the NCAA average in two-point percentage (100 of 206, 48.5 percent) and three-point percentage (73 of 207, 35.3 percent). Jackson's quickness also helps him get to the free throw line, as he draws 5.7 fouls per 40 minutes (107th nationally) and is a 77-percent free throw shooter. Jackson doesn't provide much on the defensive end, but that can be forgiven considering he gives elite offensive production.

• Six-foot-9 forward Cory Jefferson (No. 34) is having a great year that is being overlooked because of Baylor's win-loss record, as the junior does a little bit of everything. He's an efficient player offensively, and though he doesn't shoot often (19.5 percent shot percentage), he has made 58 percent of his twos (135 of 232) and 77 percent of his shots at the rim while almost never turning it over (15th nationally in turnover rate). Jefferson also does a good job of getting to the foul line, posting the nation's 239th-best free throw rate while making 70 percent of his free throws. He's also strong in the paint, ranking 103rd in block percentage while also posting top-160 marks in both offensive and defensive rebounding percentage.

• Seven-foot-1 center Isaiah Austin (No. 21) is a below-average player offensively for Baylor because of his shot selection. The thin freshman is almost exclusively a jump-shooter, and somehow, he has shot more threes this year (84) than free throws (71). Austin isn't a bad two-point jump-shooter (he's made 39 percent of them; NCAA average is 35 percent), but he's just fallen in love with those low-percentage shots, as only 35 percent of his field-goal attempts this year have come at the rim (to compare, 56 percent of Jefferson's shots have come at the rim). With his size, Austin does provide some help in the lane, as his numbers in block percentage (213th), defensive rebounding percentage (174th) and offensive rebounding percentage (250th) are all good but still behind Jefferson's marks.

This probably won't surprise you, but Baylor is a much better team than its 17-13 record indicates.

Scott Drew takes a lot of heat for being a poor game management coach, but even bad ones usually have better records in close games than the Bears have this season.

At home, the Bears lost to Oklahoma, Iowa State and Kansas State by a combined 11 points. Three other Bears' losses this year have come by four points or less.

I think this one will be close as well, but it's hard to go against recent history, as the Bears have never beaten the Jayhawks at home under Drew and haven't beaten KU in Waco since Feb. 12, 2001.

I'll say KU comes back from a first-half deficit to improve to 9-1 all-time at Ferrell Center.

KU guard Elijah Johnson has had three of his best games in the last two weeks, and I think the senior will have another big game against BU. Offensively, Johnson is a key for the Jayhawks, as his penetration could lead to open shots for himself and also teammates if he is aggressive. Defensively he'll be important as well, as his improving knees will be tested against Jackson, who is one of the quickest guards in the nation. I'll say Johnson finishes with double-figure scoring and limits his turnovers against a Bears team that doesn't create many steals.

Looking forward to the game tonight! Also, it would be great to see the KU women's track team win a National Title!!!!

Depends on KSU -OSU game...Kitties lose, Hawks could let up and keep Baylor in it. Kitties win, Hawks pull ot claws and tear Baylor a new one!!!

I'm with you hawk but if K-state pulls out a win in Stillwater they deserve at least a share of the BigXII title. I'll give em that.

Unlucky that they hired Drew maybe.

Well looks like State probably gets a share. I guess I can live with that; the better team was determined on the court, twice.

Never been so happy to have prematurely jinxed a game.

Okie St. just did their part, now lets do ours to win the title outright!!!

Thanks OSU for winning at home and beating KState. Now KU just needs to go out and play to win it outright. No sharing the title this year is what we want.

I now predict we win this game easily. Pressure is off, play loose. Trying to win it outright but without the fear of losing.