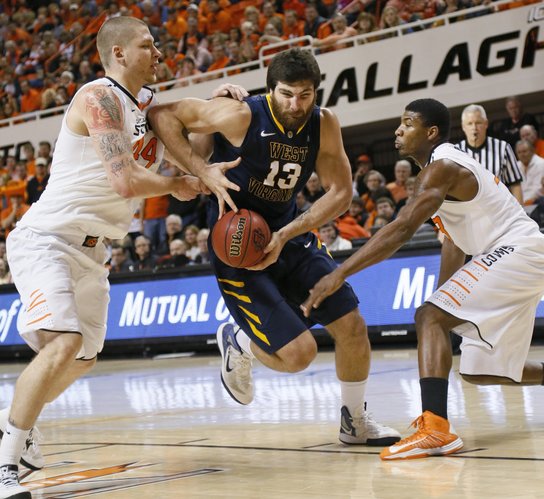 • Interior defense: The Cowboys have done a nice job of limiting opponents' easy shots, posting the nation's 16th-best two-point defense (41.2 percent). A big reason for that is shot-blocking, as OSU swats 13.6 percent of its opponents' two-point tries (27th nationally). Unlike Kansas, which gets most of its blocks from one source (Jeff Withey), OSU has three players (Philip Jurick, Michael Cobbins, Kamari Murphy) that are all in the top 220 nationally in block percentage. According to Hoop-Math.com, opponents have made just 53 percent of their shots at the rim against the Cowboys — a number much lower than the NCAA average (61 percent).

• Turnovers: Oklahoma State is solid with turnovers on both ends, taking the ball away on 22.7 percent of its possessions (61st nationally) while giving it away on 18.9 percent of its own possessions (96th nationally). The first number should be what KU is most worried about, as the Jayhawks rank eighth in the Big 12 in offensive turnover percentage since the conference season started (20.6 percent).

• Defensive rebounding: OSU actually is a much better defensive team (eighth in adjusted defensive efficiency) than offensive team (79th in adjusted offensive efficiency). Part of the reason for that has been the Cowboys' ability to end defensive possessions with rebounds. OSU ranks 57th nationally in that stat, pulling down 71.3 percent of the available caroms. The Cowboys have been even better in conference play, leading the Big 12 with a 77.4-percent defensive rebounding rate.

• Three-point shooting: OSU has been a below-average team from beyond the arc, making 33.1 percent of its three-point tries (189th nationally). Because of that, the Cowboys aren't overly reliant on threes for scoring, getting only 25.3 percent of their total points from treys (226th-highest split nationally). Phil Forte (49 of 127, 39 percent) is the only OSU regular that has shot better than 35 percent from three-point range this season.

• Allowing three-pointers: If you're looking to pinpoint a weakness with OSU's defense, you'd most likely look to the perimeter. Opponents have gotten 32 percent of their scoring against the Cowboys from three-point range (20th-highest split nationally), while 34.8 percent of the field goals taken against OSU have been threes. KU has not been a team that has taken many threes (29 percent of shots are threes, 274th nationally), but it appears there should be some opportunity for open ones against the Cowboys defense.

• Six-foot-4 guard Marcus Smart (No. 33) has been given a lot of credit for OSU's improvement this year, as the former McDonald's All-American is often lauded for his leadership and energy. Statistically, he's pretty good too, boasting a skill set that allows him to contribute over a number of categories. He's especially dangerous on the defensive end, where he's 18th nationally in steal percentage while posting a top-450 block percentage. Offensively, he's a great distributor (123rd in assist percentage) and best when instigating contact, drawing 5.3 fouls per 40 minutes (195th nationally) while also ranking the top 200 nationally in free throw rate. The freshman does have some holes in his offensive game, though, if an opponent can force him to shoot. He settles for too many two-point jumpshots, where he's a below average shooter (32 percent; 35 percent is NCAA average). Smart also has made just 22 of 73 three-pointers (30.1 percent) and will turn it over on occasion.

• Though 5-foot-11 guard Phil Forte (No. 10) is often overlooked because of Smart, he has provided the Cowboys a nice boost offensively with his efficient play. As mentioned before, Forte is OSU's best three-point shooter, and he isn't hesitant to put shots up, ranking third on the team in shot percentage (23.5 percent). More than three-fourths of the shots he takes are threes, and 87 percent of those makes are assisted, meaning KU should be prepared to chase him around screens as he fights to get open. The freshman also is valuable because he never turns it over; he has the nation's seventh-best turnover rate, giving it away just 12 times in 514 minutes. Defensively, he's OSU's second-best perimeter defender behind Smart, creating steals on 3.3 percent of his defensive possessions (255th nationally).

• Six-foot-7 guard Le'Bryan Nash (No. 2) has been able to reduce his offensive role with the addition of Smart, but the sophomore still hasn't been able to up his efficiency to become a valuable offensive player. Nash's best skill is getting to the free throw line, as he draws 5.2 fouls per 40 minutes (223rd nationally) while posting the nation's 235th-best free throw rate. Nash also is a good shooter at the line, making 78 percent of his tries there (76 of 97). Other than that, there's little to like from his offensive game, especially considering he takes 23.6 percent of his team's shots when he's in. Nash shoots way too many two-point jump shots (48 percent of his field goal attempts), and while he's an above-average shooter from that range (37 percent), that kind of shot selection is going to drag down anyone's efficiency. He's also more turnover prone than a year ago and has continued to be a dreadful three-point shooter (9-for-36, 25 percent, after shooting 24 percent last year). Nash also provides next to nothing when it comes to steals, blocks and rebounding, making him a player that appears to be getting a lot of his playing time based on hype instead of actual performance.

KenPom has Oklahoma State as the second-best team in the Big 12, making this the toughest game left at home for KU this season.

Though KU hasn't played well lately, especially on the offensive end, I think there are some reasons for optimism against Oklahoma State.

Pay close attention to OSU's Jurick, who has been an elite rebounder (top 20 nationally on both ends) and strong shot-blocker (113th nationally). Look for KU to attack him early, as he is foul prone, picking up 5.7 whistles per 40 minutes.

If Jurick is out, the Cowboys lose a lot defensively, and the Jayhawks should be able to take advantage by getting good shots inside.

I think this formula will play out. Jurick gets in early foul trouble, KU scores easier inside, OSU plays fast and the Jayhawks are able to get some transition baskets to come through with their best offensive performance in the last few weeks.

I think KU freshman Ben McLemore will prove himself to be the best player in a game filled with gifted athletes. Where he has the potential to really thrive, though, will be getting free for three-pointers. OSU hasn't done a good job of preventing shots on the perimeter, so the freshman should be able to find creases Saturday that he might not have seen in previous games. Give me 20-plus points with at least four three-pointers from the 45-percent long-range shooter.

On your Hawk to Rock the last game has Ok State. Should be WVU.

Thanks. Should be fixed.

I believe KU will win the game but I think we need EJ and Naadir to play better today. They both need to penetrate then kick to Ben or Travis for the three or get the help defense to collapse and dump the ball to Withey. I think with five days off HCBS and the staff will have the defense on point and OSU will have a tough time getting into the offense they want to. My hawk to rock is EJ. With a porous perimeter D I think he will hit a couple early threes giving him more confidence as well as forcing the defense close out hard allowing him to drive around for and easy floater or for a dump off to Withey or a three point shooter. Score will be 75-64. RCJHKU.

If we want to go anywhere beyond the Sweet 16 in the NCAA Tournament Elijah must play better. I think if he gets back to the level he was playing at in last years NCAA Tournament we're as good as anyone in the country. If he continues to make those two to three bonehead passes/TOs a game and shoot the ball poorly, we could lose in the second round to the 8 or 9 seed. It's not like his play will completely decide the outcome of our season, but it's safe to say he's our X-factor and key player.

I think we must get the ball Jeff in the post too. He has an even bigger size advantage than he normally does today against Jurick.

Jesse: Don't you miss last year when you could just pick TRob or Taylor?

Naadir and EJ need to go to the rim...if it is guarded Ben and Rele are open for 3s.

I'm hoping to see this scenario happen a lot.

I also think there are teams that match up good against KU, but OSU isn't one of them. I think KU does hustle up and down the floor to get some easy points, and with fresh legs doesn't give up the huge lead. This should be our most explosive victory in a while.

H to R: Travis Releford. He has to deal with Marcus Smart. My money is on the veteran (while recognizing that Smart is a dangerous big-play maker at crunch-time, even as a freshman).

Guess the big guy didn't really matter that much.