Figuring out a gameplan to keep KU close to Oklahoma State

Jesse Newell: Welcome back to the GameDay Cram Session, as Kansas is taking on Oklahoma State on Saturday in Stillwater, Okla.

Tom, what is your favorite thing about Stillwater?

Tom Keegan: Pistol Pete, the OSU mascot. When I see him I think of two of my all-time favorite athletes: Pistol Pete Maravich and Walt “No Neck” Williams, the White Sox outfielder.

JN: Looking at the Cowboys, quarterback Brandon Weeden will turn 28 next week. Do you think — considering his skill set and age — that he has a future in professional football?

JN: Switching to KU, if you were coach Turner Gill, what gameplan would you draw up to try to stay close to the Cowboys?

TK: First, let me say that if I were drawing up the gameplan for Turner, Kansas would lose 81-3 and No. 3 would complete passes all day to No. 81. But I guess if it were up to me, on every play I’d snap the ball right before the clock expired, I’d run the ball a lot and try to make the game as short as possible. 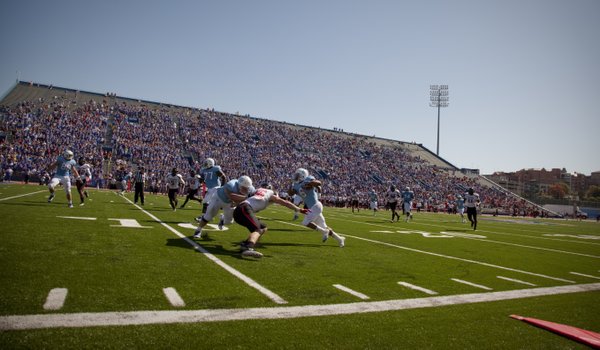 Kansas offensive lineman Trevor Marongelli (69) delivers a block to clear the way for a touchdown run from running back Rell Lewis (6) against Texas Tech during the second quarter on Saturday, Oct. 1, 2011 at Kivisto Field. by Nick Krug

Plus, I’d see if the team could get away with sneaking a 12th player on the field on defense because 11 helmets won’t be enough to stop the Cowboys. 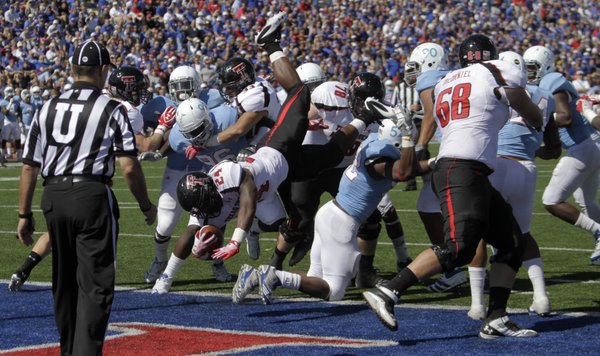 Texas Tech running back Eric Stephens (24) jumps over KU's defensive line for a touchdown during the second half Saturday, Oct. 1, 2011, at Memorial Stadium. by Mike Yoder

OSU is faster, bigger, more experienced, more skilled, more confident, deeper, better organized, more instinctive, more fundamentally sound, hungrier, more physical, in better condition, is playing in front of its jacked home crowd and the players have their names on the backs of their jerseys.

JN: I'll say OSU tacks on the extra point for its eighth touchdown. Give me Cowboys 56, Jayhawks 21.

All right, Tom, who's your Hawk to Rock? 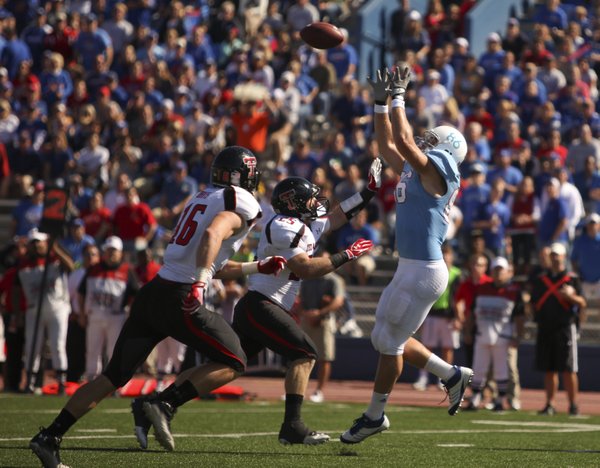 Kansas tight end Tim Biere grabs a pass over Texas Tech defenders Blake Dees (25) and Cody Davis (16) during the first quarter on Saturday, Oct. 1, 2011 at Kivisto Field. The ball was fumbled and recovered by Kale Pick in the end zone for a touchdown. by Nick Krug

Brandon Bourbon seems like he should get more carries after last week's breakout performance, so I'll say he finds the end zone against OSU. 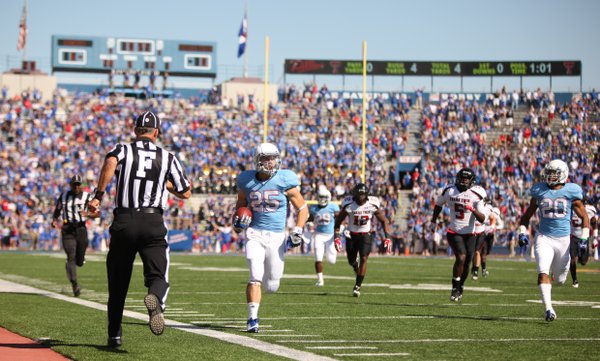 Kansas running back Brandon Bourbon races up the sideline to the end zone as the Texas Tech defense trails during the first quarter on Saturday, Oct. 1, 2011 at Kivisto Field. by Nick Krug

Jersey name joke! An open jab at Gill by Keegan. I knew you were really ahperse!

In the spirit of yesterdays movie scene festival and game picks, I'd like ahperse and his little gang to watch this one. Hopefully it won't be removed. And hopefully you all get the message. It's not that hard. After all "This is your team", right?

scene from the movie Hoosiers speech Gene Hackman by Javier

My game plan? Run with OSU! It was working against TT to the tune of a 3 touchdown lead. They are gonna score on us. Score right back! That defense of theirs stinks to high heaven! Run 'em over! That's who we are. This is our team!

I knew it! I knew it! Ahperse is the sport's editor!

Haha. The KUSPORTS.com staff actually posts an article like this.

Thank God we have Basketball. TG should be dismissed after this game. I'd feel more comfortable with having a entire new staff installed immediately.

Glen Mason anyone? TG and his staff have destroyed this program in less than two years. Its over as long as he's allowed to stay.

Keegan thought that this was going to be a low-scoring game, eh?