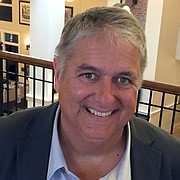 Tom Keegan, sports editor/columnist/Spodcaster/panelist for "The Drive" television show for the World Company, has a diverse media background as a baseball writer, author, and sports talk radio host.

Tom Keegan: Pick your favorite next KU football coach from this list of 17 names

Jeff Long held a very candid press conference Sunday night in the wake of the announcement that David Beaty would coach the final three games of the season for Kansas and won’t be retained.