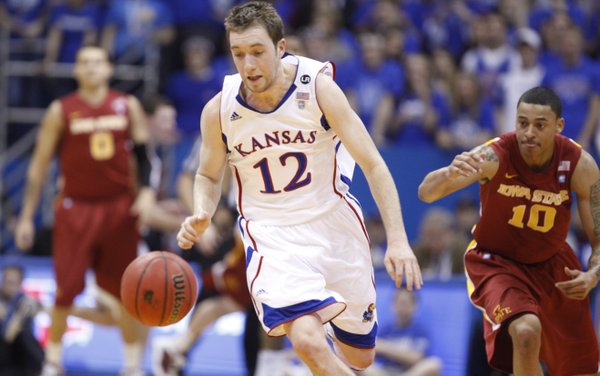 This top-shelf tier also possesses a unique quality: The Longhorns and Jayhawks have the uncanny ability to win conference road games. No other tier from the Big 12 can even come close to saying that.

Texas and Kansas are on a completely different level than their Big 12 counterparts. It's not close. The distance between the aforementioned tiers is widest between tier 1 and the rest of the Big 12 field.

To illustrate how much space is between Texas/Kansas and the rest of the Big 12, simply take a look at how these teams play on the road.

Texas and Kansas have won more Big 12 road games this season (10) than the other 10 schools combined (nine). That's embarrassing for the rest of the league. 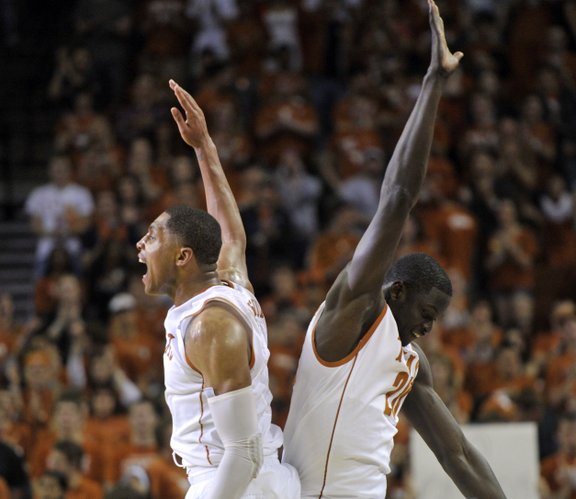 Likely, it means the rest of the league is average to good, at best, with limited NCAA Tournament ceilings.

Missouri, for instance, is a nice team, but the Tigers are 5-0 at Mizzou Arena and 0-5 away from Mizzou Arena in Big 12 play. How can MU pose a threat to reach its first-ever Final Four if it can't win away from home?

Texas A&M, as another example, reminds me of the Minnesota Twins in recent years. Consistently good, but with a limited ceiling. The Aggies are 3-2 at home and 3-2 on the road in Big 12 play. They look very good some nights, and mediocre on other nights. The Aggies haven't done anything to suggest they will make a deep NCAA Tournament run.

Kansas and Texas only have six combined road games left. Sad that I'm even looking at it that way. But it's reality: No teams other than Kansas or Texas can consistently win away from their home floor, suggesting UT and KU could be the only Big 12 teams making deep tournament runs in March.

It's been a forgettable year for Kansas State (16-9, 4-6), which was picked by the league's coaches to win the Big 12 this season. Saturday's contest at Colorado had to be the most frustrating game yet for the K-State faithful.

The Wildcats were down two with 1.1 seconds left and had possession. Shane Southwell tossed a pass from the sideline to Rodney McGruder, who spun around and drained a remarkable three-pointer with Alec Burks draped all over him. Initially, it counted and the Wildcats went nuts in surrounding McGruder. The refs, however, consulted the monitors and waved off the shot because the ball was on McGruder's fingertips as the game clock hit zero. CU won, 58-56.

Dreadful way to lose a game. That's the kind of season it's been for KSU. The Wildcats needed that game to keep their NCAA Tournament hopes alive. The sudden tugging of such opposite emotions, from the jubilation of hitting a last-second shot to the dreaded heartbreak of having it overturned, can be draining.

How much will K-State have left in the tank after Saturday's momentum killer?

Now, to keep their fading NCAA Tournament hopes alive, the Wildcats are faced with the unenviable task of taking down a team that has owned them on their home floor. Kansas is 21-1 all-time at Bramlage Coliseum and 31-2 against Kansas State since the Big 12's inception. 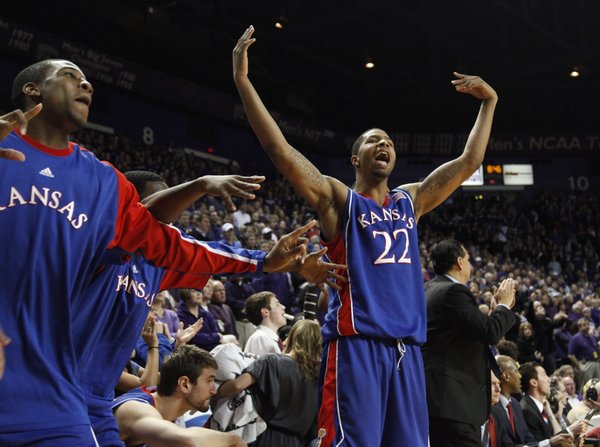 KSU must pull a Michael Beasley and Bill Walker in 2008 and defeat KU in Manhattan to save its NCAA Tournament resume.

K-State has a solid RPI (41st in country) and strength of schedule (19th), so the Wildcats could crack the tournament field if they go 8-8 in Big 12 play. For that to happen, KSU would have to finish the season 4-2.

KSU's schedule the rest of the way: vs. Kansas, vs. Oklahoma, at Nebraska, vs. Missouri, at Texas, vs. Iowa State.

Going 4-2 is possible, with the two obvious losses coming against Kansas and at Texas.

For K-State to make the tournament, however, it needs a signature victory. Beating Kansas or Texas would qualify, but I don't see it happening, for a few reasons:

• Sure, Kansas State can rebound with the best of them, and from the games I've seen, KSU plays solid defense. But it doesn't really matter if you can't put the ball in the hoop. K-State ranks last in the Big 12 in field goal percentage at .431. If anyone watched the KSU-CU game on Saturday night, you could probably relate to my wanting to bang my head against the wall in a desire for any semblance of offense from either team. It was painful.

• Furthermore, the Wildcats have struggled from the foul line. OK, so there's more to the game than foul shooting, but when you get to the line as much as K-State, converting charities becomes important in squeezing out points. Due to their aggressive, scrappy nature and offensive rebounding prowess (first in Big 12 with 15.80 per game), the Wildcats get to the charity stripe quite a bit. Kansas State has attempted 613 foul shots, second-most in the Big 12. The Cats are only shooting 61.3 percent from the line, though, last in the Big 12.

• Pinning K-State's struggles on the departure of Denis Clemente is overrated. How about some help for Jacob Pullen from guys in the post? Sure, Clemente leaving hurt K-State, but not nearly as much as KSU's inability to provide paint presence/balance for the senior guard Pullen, its best player.

That balance could have come from highly-rated Wally Judge, but he quit the team. Freddy Asprilla? He also left the team, initially saying he'd pursue professional opportunities in his native Colombia. He has since committed to transfer to Canisius (N.Y.) of the Metro Atlantic Athletic Conference. OK, fair enough. There's still Curtis Kelly and Jamar Samuels. Except Kelly and Samuels have actually regressed from last season. Kelly's averages in points (11.5 to 9.9), rebounds (6.2 to 4.9) and field goal percentage (55.6 to 53.6) are down from last season. Ditto for Samuels' points (11 to 9.6) and field goal percentage (53.9 to 40.3). 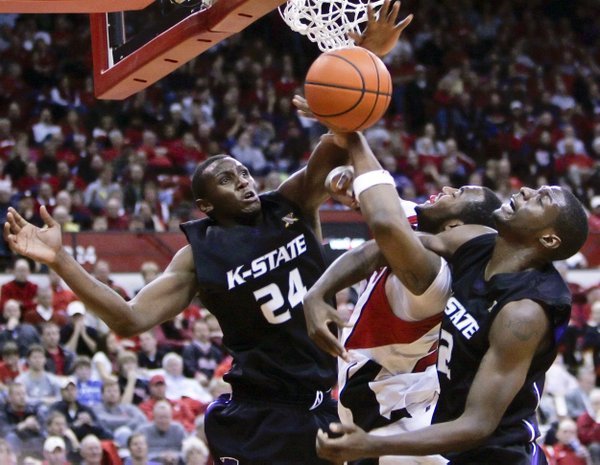 The main reason KU is 24-1 and KSU's 16-9: the development of post players from last season to this season.

KU's Marcus and Markieff Morris have greatly improved from last season to form a feared front line that should carry the Jayhawks deep into the NCAA Tournament, barring another Northern Iowa fiasco. Marcus has gone from 12.8 points per game last season to 16.9 ppg this season. His rebounding average has climbed from 6.1 to 7.0. His field goal percentage from 57 percent to a ridiculous 60.9.

Kudos to Danny Manning for developing KU's post players at a considerably faster rate than K-State's big men. Marcus and Markieff Morris could both make the All-Big 12 first-team, while Thomas Robinson has improved on the court as well and provided a steady complement off the bench. 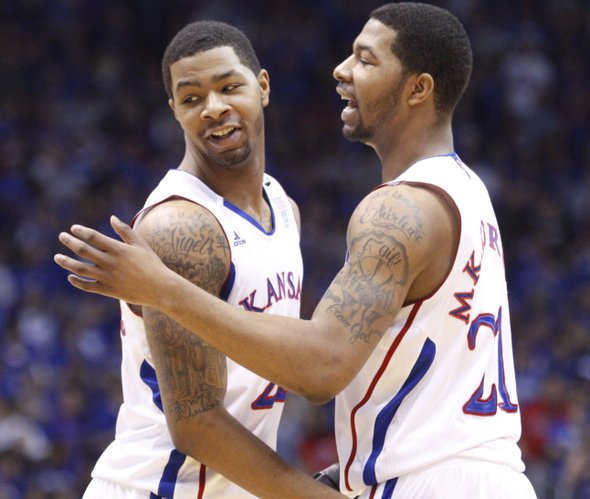 The Wildcats, meanwhile, had two post men leave the team, their two best interior players have regressed, and their post complement off the bench, Jordan Henriquez-Roberts, still hasn't matured enough to be a legitimate Big 12 threat.

I see the nightmare continuing for the Wildcats on Monday, even at Bramlage Coliseum, where they need a victory in the worst way to keep their dwindling NCAA Tournament hopes alive.

Yeah KSU always seems to have Texas' number for some reason

the EMAW's are giving out Selby's phone # on their web page. Also saying Self is calling Selby's injury all mental.

Remember on the movie Titanic, every one was calm while the evacuation was taking place. Then the guy in charge shot himself in the head, then everyone was every man for himself? That's the state of KSU baskeball and EMAW nation!

the Alec Burks stole it from Pullen and sealed the game!!

To add to Eric's point from above about KSU being weak in the post - don't forget that last summer, the first player (and, a veteran post player) to flee the KSU team was Dominique Sutton - who, at this point, looks like a cross between Einstein and Kreskin...

I work with some ksu fans. They seem to think Sutton experienced the same fate as kelly with the 3 strikes on the drug policy. Which makes sense when you consider the expectations he walked away from. He'd already been away from his family 3 yrs. What's 1 more with a shot at a final 4. Anyone else hear this?

Great point on Sutton. Sutton's role reminded me of the one Russell Robinson played for KU. Nothing extremely flashy, but the glue guy, and a chemistry guy. K-State definitely misses him. Thanks for posting.

I said before this season started that KSU being ranked that high was as suspect as R Kelly with some girl scout cookies.

It doesn't look good for kitty kats but then, when they go to Austin later in the season, is it too much to ask for a win against the Longhorns? The Playpen tomorrow will be juiced!

Huh! I guess you all feel pretty stupid now. Huge loss for the Jayhawks. Yes, it WAS a Valentine's Day Massacre in Bramlage, but not how you predicted. You just never know.....