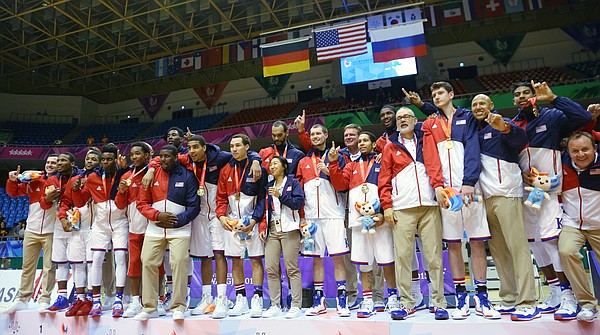 Team USA celebrates with their gold medals after beating Germany in double-overtime Monday, July 13, at the World University Games in South Korea. by Mike Yoder

Gold became a trending topic in the realm of college basketball social media Monday morning, as news spread of Kansas leading Team USA to a double-overtime victory over Germany in the World University Games final.

From SportsCenter, to Larry Brown to Dick Vitale, various tweets popped up congratulating the Jayhawks on their summer run.

Congrats to Team USA on winning the gold medal in the World University Games. So proud of Nic, Coach Self, and the rest of Team USA!

None by Larry Brown

Hey a tip of the hat to @CoachBillSelf 4 bringing home the gold from the World University games #ROCKCHALKJAYHAWK http://t.co/uDPUvHOtNb

And it's over. KU/USA wins it in double overtime. First gold medal at the WUG in a decade for the Americans.

None by Raphielle Johnson

Bet @CoachBillSelf can't wait to get back to the recruiting trail after that long trip back from Korea. Huge congratulations are in order.

WUG gold for @KUAthletics @CoachBillSelf over Germany in South Korea. Mason and Selden combined for 40, Ellis 19. KU is title good in 2016.

Even cooler, though, was the opportunity this international stage gave KU’s players. And after going 8-0 in South Korea, the Jayhawks couldn’t help celebrating their feat.

Love my brothers man, I'll do anything for these guys!! #KUCMB4LIFE

Tough win tonight !!! We battled, proud of my teammates! Want to thank God for the victory, all glory to God!!!

None by Perry Ellis

None by Hunter Mickelson

World Champs. So happy and proud of my guys!! #KUSA

This has been one of the most amazing and surreal experiences of my life. Blessed to be a part of this group of guys! pic.twitter.com/xoTauBXYBR

None by Tyler Self

So proud of this team! Toughest group I been around, especially my brother @F_Mason0 ! A big step in the right direction for KU basketball !

A few former Kansas players acknowledged the win, too.

Proud of my young boys. Way to get that gold frank mason and Wayne selden

Congrats to @CoachBillSelf and Team USA on winning the Gold Medal at the World University Games!

Congratz to my brudda @J_mari31 and the fellas! #GoldMedal #KUCMB

Even those tied to the KU football program showed some love for the basketball team’s golden moment.

How 'bout those Jayhawks. Congrats to @CoachBillSelf and @KUHoops on winning the gold medal! pic.twitter.com/k1Sky6vJ55

None by Tony Pierson

— Check out all of our KU in Korea coverage, from Bobby Nightengale and Mike Yoder, the only local journalists covering the Jayhawks at the World University Games.