Leipold said Gardner, KU’s starting running back the first three games of the season, had officially left the program.

“I guess the best way to say it is he didn’t show (Monday),” Leipold said of the junior back, who entered his name into the NCAA’s transfer portal two days after he had two carries for 4 yards in the Jayhawks’ blowout loss to Baylor. 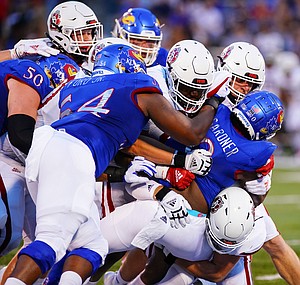 “We’re focused on the guys in the program. Wish him the best with this future,” Leipold said, adding the KU coaches want to “create a culture of competition within the program each and every day, and that’s where our focus will be moving forward.”

Gardner entered the season as KU’s leading returning rusher (4.5 yards per carry in 2020, two TDs in six appearances), and No. 1 running back. However, the 5-foot-9, 195-pound junior from Dallas didn’t produce much during the team’s 1-2 start, rushing 29 times for 56 yards (1.9 yards per carry) with no touchdowns.

“It’s one less body in the program. I guess we’re going to keep working,” Leipold replied, when asked how Gardner’s departure impacted the Jayhawks and what they’re trying to accomplish this season.

“I think everyone who has watched us, obviously we’re not where we want to be offensively. But I think everyone could say that the progress of Devin Neal continues to show itself in a very positive direction,” Leipold added.

A true freshman from Lawrence High, Neal led KU’s running backs in carries and yards each of the past two weeks, even though Gardner started. Neal rushed 11 times for 40 yards and a TD at Coastal Carolina in Week 2, then ran the ball 10 times for 33 yards versus Baylor.

Junior quarterback Jason Bean is currently KU’s leading rusher (40 carries, 216 yards, two TDs). But Neal, who only got one carry for one yard in his college debut against South Dakota, has been the most productive running back through three games, with 22 carries for 74 yards and a TD.

Even before Gardner left the program, it appeared KU was moving toward using Neal more. Asked if that was the case, Leipold replied, “I think he continues to show his value in this offense and that he has a very bright future. I continue to see his role increasing.”

KU’s head coach said the offense’s lack of sustained drives earlier in the season led him to not give Neal as many opportunities as he could have, and that probably stymied Neal’s growth.

“We’ve made sure that we’re going to do a better job with that,” Leipold said.

The coach brought up the names of two other running backs while discussing the position Tuesday during his weekly press conference. Leipold said redshirt freshman Amauri Pesek-Hickson is “getting healthy.” Pesek-Hickson, who missed Week 1 and only had one carry at CCU, ran four times for 12 yards vs. Baylor but lost a fumble.

Sophomore Torry Locklin, Leipold added, “continues to be a versatile player for us.” A former backup receiver and QB for the Jayhawks, Locklin has 10 carries for 19 yards.

The Jayhawks’ first game with Neal as their No. 1 running back comes on Saturday at Duke (3 p.m., ACC Network).

Heard Bill Maas on the radio the other day and he used an old phrase that I had forgotten: Experience is a tough teacher. The test comes before the lesson.

Welcome to your starting role Devin! Glad we have you here. Time to really start learning. And do it with some confidence, you just chased the opening game starter right out of the program!

Best to Gardner, I really mean that, but frankly he could not do anything with out offensive line, and bigger stronger backs are the order of the day. If our offensive line was even average let alone good, we have the rbs to get the job done. Gale Sayers, John Riggins, you name it, no one could be too good with our oline. It is what it is. The question is who is going to take advantage of the opportunity. No starter on this offensive line should feel secure.

How bad is our line, well, one could make a case for running the clock down to 2 on every play, just to give the defense some rest. If you are a muile, don't try to outrun the horses!!!

Also had a good observation in another story on the subject that applies here at least as much. Gotta have players that want to be here and want to work extra hard to lay a foundation. It could be that no one even sees the foundation but it’s gotta be there.

We’re still a really young team, so there’s extra development for these players individually as well as a team. Hopefully we can all continue to support them in their efforts.

Good. This team meeds to be built with as many local guys as possible. They'll work harder for the team they grew up watching and won't jump for greener pastures when the going gets too tough.

Gardner was in his junior .........how many games has Kansas won.....his freshman,his sophomore and 3 games into his junior season ........who wants to continue to being on the losing end game after game ....why is it a problem if he wants to go somewhere and win or just want to be in better situation to better their career.........it doesnt matter where you get your players from ........Kansas has never been a hotbed for football talent......so getting local guys that arent good ......but are local guys........ doesnt move the program forward either .Even though football is not like working at a dead end job they in a way are the same because if your not getting playing time you can transfer , if you dont like your job you can find a better one ..............a case can be made that both are choices for greener pastures

Orange bowl team had all kinds of local and Kansas players.

So ...........................where are they now ? and how long has that been ? To say there are no good players in the state of Kansas would not be a true statement because there are, but Kansas is never in the conversation along with the likes of California Texas or Florida when it comes to recruiting .....regardless where is the talent now. Bottomline kids want to win,... and the talent that is here the trick is keeping them here......

Reid and Kane were seniors in 05 I believe.