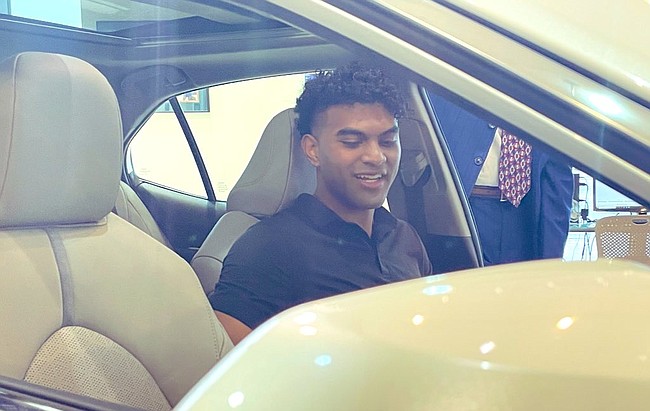 Kansas guard Remy Martin sits in the driver's seat of his new Toyota Camry after signing an NIL deal with Crown Toyota on Thursday, Oct. 28, 2021 in Lawrence.

If there ever was any question that Kansas basketball players were going to get big dollars or big merchandise as part of college athletics’ new name, image and likeness rules, put that question to rest.

Remy Martin, KU’s transfer point guard from Arizona State, became the first KU basketball player to land a significant deal under a partnership led by a pair of former KU athletes who hope to be awarding thousands of dollars a month in NIL deals to KU student-athletes.

Martin on Thursday morning signed a marketing deal with Lawrence-based Crown Toyota, and walked off the lot with a new car — a 2021 Toyota Camry. Other terms of the deal were not released, such as whether Martin receives other compensation or what type of marketing duties he might have to do for the dealership.

“This is amazing,” Martin said while hopping in the car for the first time. “I’m just super-grateful for the opportunity. Being in college for the amount of time that I (have), I never would’ve thought I would see the day where I’d be able to make some money off this opportunity and get a vehicle, which is unreal to me.”

The deal, which technically was a lease for Martin, was brokered by 6th Man Strategies. The company was founded by brothers Matt and Ryan Baty, both former KU baseball players . The company recently announced that it had reached agreements to handle NIL deals for all 18 Kansas men’s basketball players. 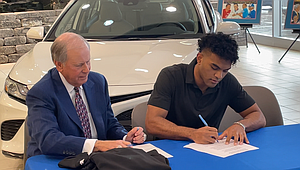 Kansas guard Remy Martin, right, signs the paperwork on his NIL partnership with Crown Toyota as owner Miles Schnaer looks on at the dealership on Thursday, Oct. 28, 2021.

Before Martin was handed the keys to his new ride, Matt Baty said simply, “This is the new age of college athletics.”

Indeed, prior to the NIL rule changes, a local business giving a new car to a basketball player likely would have been the epitome of an NCAA rules violation.

Now, it may be a requirement to keep up with the Jones in the world of college athletics. Baty said there will be more car deals in the future.

But perhaps more interestingly, the company is looking to capitalize off of the large donor base that supports KU basketball.

Traditionally, those donors have given money to Kansas Athletics, which uses the dollars for everything from scholarships to facility upgrades. But 6th Man Strategies is now wanting to get KU fans to send the company money on a monthly basis, which the company then will use to fund NIL opportunities for Kansas basketball players.

6th Man Strategies is currently doing fundraising and promotions for what it calls its 100 Club, which will be made up of people who will pledge $1,000 a month to support NIL opportunities for Kansas basketball.

On Thursday, though, it was all about Martin’s car. Martin, who was without a ride until signing on the dotted line, said he was overjoyed about the opportunities that already have come his way in the NIL era, which first went into effect on July 1.

“Once I heard about the NIL deal, it was kind of the cherry on top,” he said of his decision to stay in college one more year and come to Kansas. “I was more focused on the bigger picture, but, obviously, this is a blessing. It’s something that every college athlete wants, but we can never get distracted by it. … I’d be kind of dumb not to try to capitalize on this while I’m here, but my whole goal is to try to make it to the NBA and I’m here to try to help KU win.”

As for the specifics of the car, Martin said that was left in the hands of the dealership and owner Miles Schnaer.

“It didn’t matter, as long as it got me from point A to point B,” Martin said. “Looking at this car right now, I am extremely grateful. It could’ve been pink and I still would be in that car every single day.”

Martin, though, said he has plenty of business to take care of on the court, too. He said Thursday that practices have been intense and that the team has built strong chemistry, no small feat for a group that features 10 newcomers.

KU’s first opportunity to do that will come Saturday at a closed-door scrimmage against Tulsa in Oklahoma. After that, KU will take on Emporia State at Allen Fieldhouse next Wednesday in the lone exhibition game on the Jayhawks’ schedule.

From there, all attention will shift to the season opener against Michigan State on Nov. 9 at the Champions Classic in New York City. Martin said Thursday that he believed the new-look Jayhawks would be ready for all three early-season challenges.

“We have the guys and we have the veterans to do it,” he said. “It’d be different if we had all freshmen, but we have veteran guys who have been here for a while.

what a strange time to be alive.

And congratulations to Remy. He may regret being the first one to get a car though... Next week DMac might be driving a brand new Escalade and Remy get jealous.

Curious if this was an outright gift or if this is a lease. He's going to have taxes and insurance, or will he? It might be under the dealership's name and they would cover those. I saw some other athlete (not at KU) got a lease and that makes sense for an athlete who won't be at KU for years. I also wonder how much the "Remy Martin" car would go for after six months of a student athlete driving it.

The article says it is a lease although it gives no further specifics.

KU basketball players don't exactly have the cleanest of clean driving records. But there's almost no way that the Remy car will end up as worthless as the Billy Preston car did. Beat up and broken down and worthless in the parking lot at McCarthy Hall. Especially if Remy/KU can live up to the hype this year.

I am glad to see this is happening legit now, because let's be real, it was happening before but it put everybody at risk.

I don't like it. It's going to cause resentment, it's going to exacerbate what we saw w/OU & UT jumping ship for football. They are already well-compensated for everything they do. It's going to change the game and make it even more about $$ than it already is.

coaches are getting contracts worth $50M, the NCAA is getting paid over a $1B dollar for the basketball tournament rights--and this doesn't even consider what they make from football. It has been all about the money for a long long time. the only difference now is the people putting on the show are getting a piece.

Some kind of compensation is justified, most of us agree. However, I fear repercussions far and wide resulting from "in kind" remuneration. Envy & jealousy can destroy everything built during boot camp.

How? The other players on the team can also take advantage of the new age of NIL and get sweet deals for themselves if they're savvy enough to do so. And besides, if Coach Self is good at creating a team-first culture in the locker room, I'm sure Remy's teammates will be happy for him that he was able to get a car.

Agree Ed. There is a whole host of unknown issues that can pop up. Can a local dealership offer a NIL to a potential high school player to lure them to a school? How would that be any different than what was alleged with Silvio? Will players take more high-risk shots because they might end up as viral videos, thus boosting their profile? Will the transfer protocol be used in conjunction with promises of NIL deals? Remember years ago when T. Boone Pickens was throwing all sorts of money around for Ok. State? What would prevent him from offering $100,000 NIL deals to each player, not so much for advertising, but for sheer recruiting?

The NIL rules don't allow payment/gifts for the "promise" of going to a certain school. So the kids can't say "give me a car and I'll commit" and the Doesn't mean everyone will follow this rule but then they are risking a lot for something they could do "legally" if they just wait until the kid commits. The workaround is likely a promise that they will get "x and y" after they commit, though I'm not sure where this stands in the rules. If no promises are made in writing then who knows how that all works.

It reminds me of a situation at OU I think many decades ago when some football players not working at a car dealership created quite a stink.

I’m glad that Remy has a car now. Was his situation that different at asu? I wouldn’t go as far as Armen, but all this does seem to have the potential to be Pandora’s box. Maybe the ncaa can legislate it appropriately.

I doubt that the NCAA will be able to do any legislating of stuff like this anymore. Not after the Supreme Court unanimously castrated them as being in violation of the Sherman Anti-Trust Act. At this point, the only reason for the NCAA to exist is to put together the annual basketball tournament.

They’re pros now. Need to be paying taxes on the income from their professions. Scholarships, room/board, tutoring, etc. The lines are completely blurred now.

I hated Remy Martin's guts when he was at Arizona State, but the more I read and hear about him now that he's here at Kansas, the more I like him. He's passionate and hungry and seems genuinely appreciative of the opportunities given to him because of his talents. I can't wait to see him in action in the crimson and blue!

agreed! He seems to really have the right attitude. Can't wait to see him in action

Lease lol. Does he have to pay for the insurance and gas? Yes, so lets break this down, he will end up spending money himself for a NIL deal. Is there a annual mileage limit? Leases have those.

6th man strategy costs the player and boosters money on this one, and the BATY's make money.

Did anyone review what the player signed? Did anyone other than 6th man explain it after reviewing it to Remy?

This will not be the first questionable deal from our "new" NIL 6th man reps.

Given the rules reality of today’s college basketball, I just can’t help but congratulate Remy on working out such a great deal. Caitlin Clark, Iowa’s fantastic star, also just reeled in a super deal.

However, in the ‘can’t teach old dogs new tricks’ category, as a 60-year fan of basketball, I just haven’t been able to warm up to the new basketball mileau, where athletes now have the opportunity to focus on earning money, perhaps taking away from their need to concentrate on basketball.

Reached for comment while in the basketball witness relocation program, Billy Preston stated "I miss my dodge charger". Preston did go on to say he "regretted not getting the emergency roadside assistance coverage"

It just seems all this NIL stuff going on cuts against parts of what the NCAA is trying to hang KU on.