Notebook: Jalon Daniels comes in as emergency QB for KU football; redshirt season up in air

In the midst of a one-sided home loss to rival Kansas State on Saturday, the Kansas football team had to play three quarterbacks — including sophomore Jalon Daniels, who is supposed to redshirt this year — before the Jayhawks even got to halftime.

Starting QB Jason Bean got hit hard to close the second series of the afternoon in what would become a 35-10 win for the Wildcats at David Booth Kansas Memorial Stadium.

So KU’s third possession began with backup Miles Kendrick in for Bean at QB. But on just his second snap on the series, Kendrick suffered an injury when he took a hit near the sideline on a 17-yard completion to Kwamie Lassiter II.

Bean tried to play through some pain, returning to the field to replace his replacement. But that only lasted for the third and fourth drives of the game.

By the time KU opened its fifth series, late in the second quarter, Daniels was in at QB, and he manned the position for the rest of the day.

Head coach Lance Leipold recently announced KU planned to redshirt Daniels this year, though Leipold said at the time that could change if the Jayhawks needed Daniels to appear in more than the maximum four games. Daniels’ reserve appearance on Saturday was his third of the season. 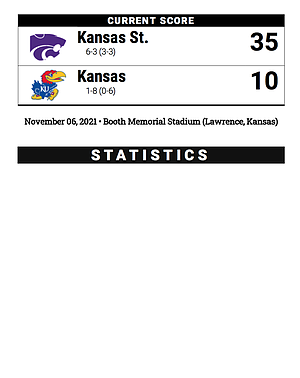 Leipold said after the loss to K-State “it’s too early to tell” whether KU will be able to maintain Daniels’ redshirt this year. The coach said that will likely be predicated on the availability of Bean moving forward.

A sophomore who started for KU as a true freshman in 2020, Daniels went 13-for-19 in his unexpected appearance versus K-State, throwing for 105 yards and one touchdown, with no interceptions.

“You know, the game of football, it’s always the next man up mentality,” Daniels said of coming in as the emergency QB. “I’ve been taking this year to be able to sit behind Miles Kendrick and Jason Bean, you know, just learn from them.”

Asked about the prospect of playing more in the final weeks of the season and losing his redshirt in the process, Daniels said he will take the situation “day by day.”

“At the end of the day, I have faith in the coaching staff. I'm trusting the process,” Daniels said. “I believe in everything that they're doing. So whatever route they decide to take is the route that I'm going to go with.”

No updates on injured Jayhawks

Bean and Kendrick weren’t the only skill players to leave the rivalry game due to injury. Sophomore running back Torry Locklin also got hurt when he was being brought down for a tackle in the first quarter. First Locklin, and then Kendrick, had to leave the field riding on the back of a cart.

Leipold said after the game he didn’t have any further details about the severity of the injuries or the future availability of Bean, Kendrick or Locklin. But the coach did say Bean was doing “the best of the bunch.”

Super-senior nose tackle Sam Burt, who hurt his right arm in KU’s season opener and missed the following seven games as a result, returned to the lineup for the rivalry game.

One of KU’s team captains and a former walk-on from Abilene, Burt led the team onto the field prior to the game, carrying a KU flag, and waving it at midfield.

Then Burt, a starter entering the season, came off the bench to contribute for the KU defense. The veteran nose tackle was credited with a QB hurry and made two solo tackles.

Ahead of Saturday’s rivalry matchup with K-State — the 119th edition of the Sunflower Showdown — KU football released a new hype video, narrated by none other than former head coach Mark Mangino.

“Six letters. One word. The reason Jayhawks play. Kansas,” Mangino says as the video begins. “The message for any athlete who dons the crimson and blue is clear and direct. It’s a privilege to play for this state.”

Now retired, Mangino coached the Jayhawks form 2002 to 2009, amassing a 50-48 record and postseason wins at the Fort Worth Bowl, Orange Bowl and Insight Bowl.

The nearly 2-minute long video includes highlights from some of the past Sunflower Showdowns, as well as clips of this year’s KU players in action.

Current KU coach Lance Leipold tweeted out a message thanking Mangino for his support, and Leipold wrote he has enjoyed conversations with Mangino.

We Play for Kansas

Lack of Kansans in KU lineup

The Jayhawks’ starting lineup for the rivalry matchup with K-State on Saturday only included one in-state player: freshman running back Devin Neal (Lawrence).

Including walk-ons, the entire KU roster only has 19 players from the Sunflower State.

Meanwhile, the Wildcats have more than a dozen in-state players on their two-deep alone, and 51 on their roster.

Asked earlier this week about the small number of in-state players contributing for the Jayhawks right now, Neal said he didn’t think it was strange.

“You know, there was obviously recruiting stuff that happened before I even got here,” Neal said. “So I don't necessarily know what the thought process was for any of the previous coaches. And that's really all there is to it.”

Neal also thinks the makeup of the roster might look different in a few years.

“I think Coach Leipold, what he's put out there is that he's trying to recruit more in-state guys in Kansas,” Neal said. “And it's pretty important to start recruiting in your local area. So, yeah, I do think it will change a little bit.”

Respect between Klieman and Leipold

Though both head coaches in the days leading up to the annual rivalry matchup said they didn’t know each other too well, each expressed his appreciation for the other.

Leipold said he and Klieman have a lot of mutual friends in the business.

“I think he's put that program back to the position that it was under Coach (Bill) Snyder,” Leipold said of Klieman, who is currently in his third year leading the Wildcats and improved his record to 18-14 with Saturday’s win. “Well-coached, physical football team.”

Daniels seems like the QB of the future, I think Leipold finds a way only to use him one more time.

Kendrick is the guy that needs to apply for a medical red-shirt.

I agree but wonder what has happened to Easters and Hawley? Have heard nothing about them.

Jeff - I think this is Kendrick’s 6th year, so I don’t think a medical RS is an option. At some point, it’s time to move on. There will be plenty of backups next year.

Dale - I was thinking that it would be possible to give each a one or two game audition if Bean/Kendrick remain unavailable for more than one week.

I like that idea. Get their feet wet, let them see how much they have to learn so they are extra coachable next Spring.

It is always a balance. The most important thing at all times is the message you send to your team.

If I’m a guy out there grinding, getting my a** whipped every Saturday, do I respond to some cutesy roster moves or do I expect the staff to do everything possible to support me?

These guys deserve nothing less than the best available at every position. Coaches are allowed one mantra. If it costs Daniels a redshirt, then that’s the cost. Period.

That video though! The Big Man gave me chills! Coach you got screwed! We still love you! Rock Chalk!