Who’s better, Baylor or Gonzaga? Who cares, says KU’s Self; he just wants Kansas to be better 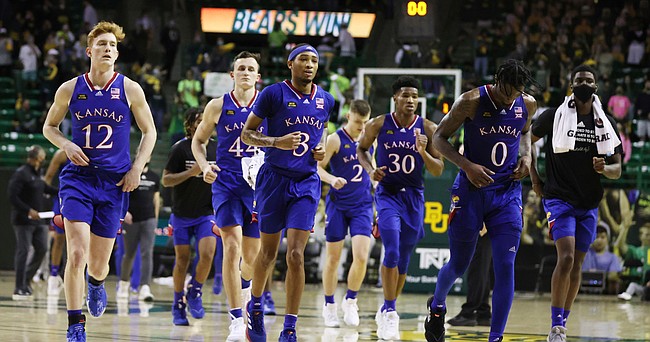 As the only team in America that has faced both No. 1 Gonzaga and No. 2 Baylor so far this season, the ninth-ranked Kansas Jayhawks are uniquely qualified to answer the question that asks which of the nation’s top two teams is better.

Not that that makes providing an answer any easier.

“I would be shocked if there's a third (team) that fits into that category,” said Kansas coach Bill Self on Monday night, following his team’s 77-69 loss at No. 2 Baylor.

In a month, barring issues brought forth by the pandemic, both Auburn and West Virginia will be able to join the conversation.

The Tigers and Mountaineers are both slated to face Baylor in the next four weeks, and both already have played — and lost to — Gonzaga.

But, for now, it’s just Kansas. And as much as the Jayhawks (10-4 overall, 4-3 Big 12) would prefer to have a different perspective, they got the best from both teams when they faced them and only have losses to measure them by. 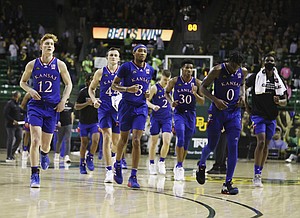 “We saw Gonzaga actually run it right down our throat, right from the beginning,” Self said of his team’s 12-point loss to the Zags in the season opener in November. “And we saw Baylor do the same thing (Monday night). So the games were actually pretty similar.”

The two top-10 clashes would have been even closer to being carbon copies of one another had KU walk-on Chris Teahan not thrown in a deep 3-pointer at the buzzer on Monday night to set the final margin at eight points instead of 11. Big news in Las Vegas. Didn’t mean much on the court.

What happened there, with Jared Butler exploding for 30 points and eights assists, was just as tough of a test for the Jayhawks on Monday night as the opener was when Jalen Suggs and the Zags handed KU a loss to open the season.

“Baylor had us down 14 or 16 or something and Gonzaga had us down the same thing, and we came back and tied Gonzaga,” Self recalled. “We didn't quite get close enough to do that today, but I think they're both terrific.”

He continued: “Gonzaga probably beat us with all five of their guys, and tonight, let’s just give the guy credit, you know, Butler did a lot of that on his own tonight. So I don't know which one I'd say is better; they're both terrific.”

Asked further to divulge who he’d pick if the two teams faced each other — which was actually supposed to happen back on Dec. 5 before COVID-19 decided against it — Self elected not to make a pick.

Against both, the Jayhawks had moments where they, too, were really good. But those moments were too few and far between and slow starts hampered the Jayhawks in both games.

That has been a troubling theme of the 2020-21 season for Kansas, which, even in some of its victories, has not exactly come out of the gate clicking at all five positions on both ends of the floor.

“I don’t know what causes that,” Self said. “So early in the game, it shouldn’t happen.”

On Monday, it was as much what happened on the defensive end of the floor as with a slow start shooting the ball that hurt the Jayhawks. 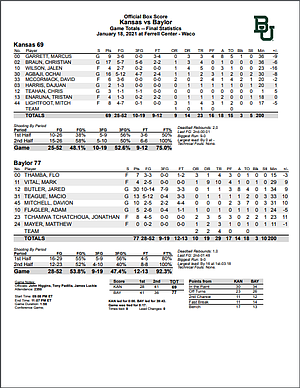 On the very first possession, after Baylor had won the opening tip, Butler got free for a 3-pointer at the top of the key and absolutely buried it, providing an early glimpse of what was to come.

On the shot, KU defender Ochai Agbaji went under the screen instead of sticking to Butler, which gave the Baylor guard all the room he needed to pull the shot and drain it.

“So he sees a big basket,” Self noted of the early make giving Butler rhythm and confidence. “I’m not saying he wouldn't have (anyway), but that was a mistake.”

All night, the Bears (13-0, 6-0) seemed to get what they wanted and take what Kansas gave them. Early on, the Jayhawks could do neither.

After throwing the ball in to junior forward David McCormack on its first possession of the game, the Jayhawks turned it over when McCormack lost his footing and traveled 31 seconds into the game. That, too, was a sign of things to come for the rest of the night, as McCormack finished with four turnovers in 20 minutes.

Agbaji and Christian Braun’s hot 3-point shooting the rest of the night — the two combined to shoot 9-of-13 from distance — helped give KU hope, and Self said both should pull the trigger on open shots without hesitation the rest of the season.

There are other players on this Kansas team, however, who do not have that same kind of green-light go-ahead. And Self believes more poise from those players, particularly early, could help KU avoid the poor starts that have plagued them of late.

“(They) probably need to give the offense a chance to at least work a little bit or give (the defense) a chance to break down,” Self said. “We were impatient early, when we had to have a good possession.”

Self continued: “And to be honest with you, we would have been buried if it weren't for CB making two or three threes early. But after that we settled in and we did some good things, and I thought the second half we actually played pretty well.”

Pretty well for a half wasn’t good enough to beat the nation’s unbeaten and second-ranked team on Monday night.

And the goal for Kansas from this point forward is to make sure that they’re not looking back at any more partial performances the way they’ve had to in losses to the country’s two best teams.

“There's more things that have to go right for us to beat somebody like Baylor or Gonzaga than what has to go right for them to beat us right now,” Self said Monday night. “And that's not being negative; that's just a fact.”

Not gonna happen this year. Let's see it for what it is. We simply do not have the players to win with anything but our A game. Most disturbing is this team seems like a Frankenstein mixture of parts. We are continuously getting behind and its not just were not ready to play, it is that we don't seem to understand that effort it the one thing you can bring every night, and you must bring it from the moment the game begins. A look at the conference shows that Texas has 3 5 stars in the starting lineup, Baylor has Butler, Teague, Mitchell, and even Vital, we really have Garrett, Obaji, and whoever is hot that night, you never know who.

Perhaps our settling on recruiting is starting to catch up with us. Baylor has a top 5 recruiting for next year, and texas always recruits very well.

This year we are getting nothing out of our recruiting last year. Thompson hurt, Grant-Foster just has not figured it out. Harris is new, but he does not shoot well enough to keep teams honest, Wilson is actually a freshman, in experience, and that means up and down. Muscadin is a project. Mitch I love him, he is tough,, but he is simply not physically big enough for this conference. So, there you have it, and next year if Garrett does not come back, what makes us things will be very much different, 3rd or 4th two years in a row looks very likely. Sidney Curry will have to play some next year.

I don't think it's "settling" in recruiting, it's that other coaches are using the NCAA probe as ammo to actively recruit against us. Coach Drew is notorious for doing this as kids have said so. It's no coincidence that Baylor has "stole" a few Kansas/Sunrise Academy kids the last couple years as a result. We just can't expect recruiting to return to normal until the NCAA stuff is resolved. Hopefully the new relaxed transfer rules will allow us to fill a few gaps in our lineup this summer.

Baylor is probably better than Gonzaga if you consider all positions, but Gonzaga has a couple of guys that may be the best players at their positions. It's about equal. But we haven't lost by 20 to either. We just haven't been ready mentally for the games. It doesn't matter who you play against, with intensity and effort when you have the skill level of these players, you can be in any game and have a chance to win.