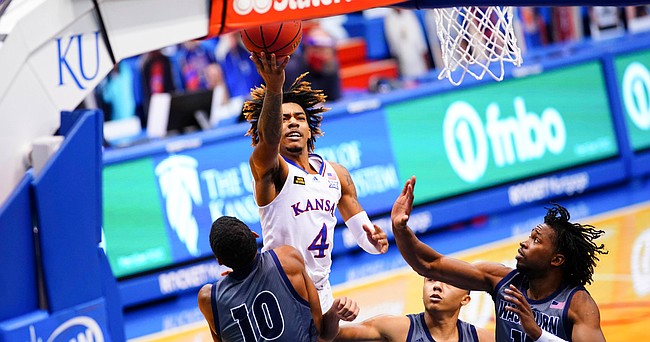 Kansas guard Latrell Jossell (4) elevates to the bucket before being called for a charge during the second half on Thursday, Dec. 3, 2020 at Allen Fieldhouse.

Jossell, a freshman reserve who played sparingly for the Jayhawks this past season, announced his commitment on his social media accounts Friday afternoon.

Listed at 5-foot-11 and 160 pounds on KU’s roster as a true freshman, the former three-star prospect only appeared in 10 games for the Jayhawks, averaging 2.7 minutes played in those outings.

KU coach Bill Self said earlier in April when Jossell announced his plans to leave the program that the young guard was searching for more playing time elsewhere.

“Latrell is very popular with our staff and teammates and we all wish him the best at his next stop,” Self said at the time. “He’ll do great.”

Enaruna stayed in the Big 12, migrating to Iowa State. Grant-Foster moved on to DePaul.

Neither Muscadin nor Thompson has decided on his future as of Friday.

Jossell scored 13 total points during his brief time at KU, going 3-for-8 from 3-point range in his 27 total minutes of playing time.

Good for him. Glad he was a good part and able to experience our program, and wish him well at SFA.

I always wonder why soliloquies of inspiration seem necessary when scholarship players quit the team.

A simple goodbye should be gracious enough.

Reading the story of his "100% COMMITMENT" article to KU - http://www2.kusports.com//news/2019/nov/14/kansas-lands-commitment-3-star-point-guard-latrell/ I was interested to see those four players mentioned all were one-and-done's, though not to go on to the NBA, but just to go on to other, lesser programs. I wish them well, except when playing KU, and I hope who they were replaced with exceed their (lack of) accomplishments. I am sorry that Latrell's lifelong dream of playing at KU didn't turn out the way he hoped it would, though I'd like to think it still had a chance to.

Historically speaking purple, white and black have not had sustained success