As first reported by Football Scoop, both Jeff Hecklinski and Mike Ekeler are leaving the program.

Hecklinski, KU’s tight ends coach and recruiting coordinator during Miles’ first season with the Jayhawks, is expected to be named the offensive coordinator at San Diego State, a source confirmed to the Journal-World.

Ekeler, who worked as KU’s special teams coordinator and coached inside linebackers, per Football Scoop, is leaving to “pursue other opportunities.”

KU has yet to announce any such changes and both coaches still appeared on the team’s online roster as of Wednesday. 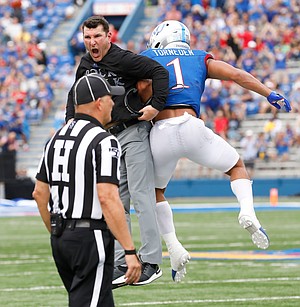 Kansas safety Bryce Torneden (1) and special teams coach Mike Ekeler get airborne as they celebrate a missed field goal by the Mountaineers during the second quarter on Saturday, Sept. 21, 2019 at David Booth Kansas Memorial Stadium.

After one year at KU, Hecklinski is moving on to reunite with head coach Brady Hoke at San Diego State. Hoke, head coach of the Aztecs from 2009-10, was rehired by SDSU earlier this month. Hecklinski worked for Hoke in the past at Michigan, San Diego State and Ball State.

Per a term sheet Hecklinski signed when Miles hired him at KU in December of 2018, the assistant earned $160,000 this past year. The deal was guaranteed for two years. The terms also state that if Hecklinski left KU during the second year of his deal, KU would be owed 100% of his salary for 2020 ($180,000) unless he left to become an FBS head coach.

Ekeler has worked on a number of college staffs over the past 15 years, including stops at North Carolina, Georgia, USC and Nebraska.

KU signed Ekeler to a three-year deal, with the first two years guaranteed, in December of 2018. Per the terms of his contract, Ekeler made $325,000 between his base salary and “personal services” payments in 2019.

Should Ekeler emerge as an assistant coach elsewhere, terms of his buyout with KU state that if he leaves to go to another school in a role other than FBS head coach or defensive coordinator “with play-calling duties” in the AAC, ACC, Big Ten, Pac-12 or SEC during the second year of his deal, KU would be owed 50% of his year two salary, which comes out to $112,500.

Interesting timing with the final signing day in a couple weeks and still some significant commitments to complete.

I seem to recall there has been more turnover year 1 to 2 than otherwise. I wonder how our experience compares to coaching changes elsewhere?

I think this goes with the territory when you hire a coach who is not an active head coach. Not being able to bring staff with you adds up to some misfires early on. This amounts to a significant amount to turnover for KU when you add Bowen and the change at O. C. As Dirk notes, the timing is challenging.

Let’s hope that solid, long term replacements are found. And soon. We need some stability on the staff in order to have it in the program.

Hecklinksi is making a step up in his career. For Ekeler, "to pursue other opportunities" smacks of being asked to leave, to me.

There is no way this mass exodus of assistant coaches can be spinned as a positive. This leaves recruits wondering why this is happening. I cannot recall the last time we had three assistants leave after their first year with our program. Not good