Kansas guard Devon Dotson (1) erupts after hitting a three-pointer in front of Iowa State guard Tre Jackson (3) during the second half on Monday, Feb. 17, 2020 at Allen Fieldhouse.

For weeks, the Kansas defense has carried the third-ranked Jayhawks to tough wins in tough places.

On Monday night, inside the cozy confines of Allen Fieldhouse, it was the KU offense that took its turn, catching fire to spark a 91-71 Kansas victory over Iowa State.

Point guard Devon Dotson exploded for 29 points (two off his career-high) on 11 of 14 shooting, and four other Jayhawks reached double figures in scoring.

Dotson connected on 6 of 8 3-point tries, hitting 3 of 4 from deep in each half on what was a balanced scoring night for the Big 12’s leading scorer.

Third-ranked Kansas, which picked up its 800th all-time win inside Allen Fieldhouse, shot 56.7% from the floor and hit double-digit 3-pointers (12 of 27 Monday and 11-of-22 Saturday versus Oklahoma) for just the second time all season.

“We did some good things," Kansas coach Bill Self said after the victory. "But none (of it) was better than Devon tonight.”

The 91 points scored by the Kansas offense were the fifth most by KU in a single game this season, and Monday marked just the sixth time all season that KU had scored 90 points or more in a single game.

The offense got going early and never stopped. 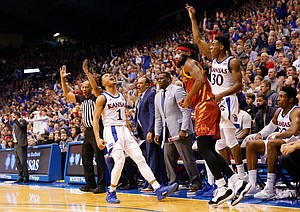 During Saturday’s first half against Oklahoma, KU center Udoka Azubuike missed five shots and looked a bit off, hesitating instead of immediately attacking the rim.

He had no such problem Monday night.

On the first possession of the game, Azubuike caught a pass on the right block and went up, through two ISU defenders the second he gained possession. Moments later, he did the same along the left baseline. And he followed that up by flushing a perfectly thrown pass from Ochai Agbaji (14 points in 30 minutes) after sealing off his man in the paint.

In the game’s first five minutes, Azubuike (13 points, seven rebounds and two blocks) had 6 points, four trips to the free-throw line and one vicious dunk.

Despite the strong start by the KU big man, the Cyclones stuck around.

ISU opened the game shooting 9 of 11 from 3-point range, playing Kansas virtually even through the first 15 minutes of the contest.

Even with the Cyclones red hot from downtown in the first half — they made just 2 of 11 from 3-point range in the second half — the Jayhawks maintained control with their efficiency and effort.

“When they’re hitting shots like they did, we have to respond," Dotson said. "I think every game we try to knock down our shots, but this game people were rolling."

Said Iowa State coach Steve Prohm: “If you’d have told me we’d have 40 at halftime, I’d have thought we’d be up or down one or two. I knew (Kansas) would be better in the second half. And we probably played a part in that.”

The lead and 3-point percentage nearly was larger, but a running 3-point attempt by Dotson at the first-half buzzer just missed.

Freshman guard Christian Braun (13 points on 5 of 6 shooting in 22 minutes) also drained three first-half 3-pointers for Kansas, which entered the break with mixed emotions about the first half.

“We didn’t guard at all,” Self told ESPN’s Holly Rowe before heading to the locker room. “It was a H-O-R-S-E contest. The whole game plan is to try to run them off the line and we did a terrible job.”

That said, Self was pleased with the 10 points and early tenacity by Azubuike.

“I thought we actually went to him a lot early and had pretty good inside-out balance,” he said.

The Jayhawks (23-3 overall, 12-1 Big 12) quickly turned the comfortable halftime lead into an insurmountable second-half margin, first by hammering the ball inside to David McCormack and later with a little more damage from the outside. 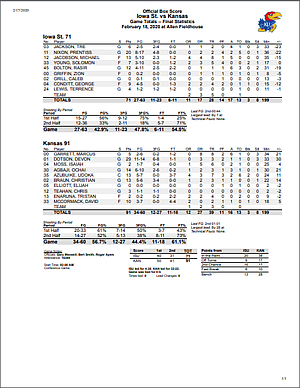 The unofficial knockout blow came when Dotson picked up his third of three steals on the night, picking the pocket of ISU’s Prentiss Nixon, and raced coast to coast to the other end to finish the layup while being fouled.

As the ball fell through the net and Dotson walked back toward the free-throw line, the KU sophomore flexed and kissed his right biceps.

With the Jayhawks now having five days until their next game, — 11 a.m. Saturday at No. 1 Baylor — Self said he was looking forward to giving his guys a bit of a break after a rough stretch of the schedule.

“I think we’re OK,” Self said recently. “(But now) the break occurs where you can actually catch your breath.”

Monday marked the Jayhawks’ fourth game in the past 10 days. To put that pace in perspective, KU’s next four games will be played in a 16-day span.

“Wednesday on the road in West Virginia, 11 a.m. Saturday and then turn around and play Monday — that’s about as hard, or as tiring, as what our league schedule can offer,” Self said.

KU-Baylor on Saturday will be the featured game of ESPN’s College GameDay. The Bears have hosted GameDay in Waco, Texas, just one other time, back in 2011.

"I'm very excited," Dotson said of the looming matchup with No. 1 after the game. "Big game. Should be fun."

Nobody hates Iowa State more than I do, and while I'm glad we got a blowout win over the Cry-Clowns, I'm disappointed that the final margin was only 20 and not 30 or 40. I'm also really frustrated that the Jayhawks couldn't be arsed to play defense in the first half. How the hell do you allow a Cry-Clown team with a sub-.500 record to shoot 56% from the field and go 9/12 from three-point range? That's despicable. If KU had come ready to play defense, we would have held them well below the 71 points they ultimately scored. Good thing our offense was clicking for the most part, because that was a shootout!

If we show up like that against Baylor on Saturday, they can call whatever score they want, and we can kiss our chances of winning the Big 12 goodbye.

But on the bright side, we got a regular season sweep of the Cry-Clowns, and they can go back to Shames and screw their pigs.

The only thing better would be if we beat them a third time in the Big 12 Tournament and shed our unwanted status of being their bitch in the conference tournament.

I actually thought at least half of ISU's first half threes were pretty well defended. Several of the shooters had a hand in their face as they let the ball fly. When a team comes to Allen Fieldhouse they know they have to be perfect to win most nights against KU. ISU was nearly perfect from three point range in the first half. Kansas was better than average from three point range also. (For the entire game)

For most teams it is their chance to experience a National Championship like atmosphere, because the KU fans make it that way. ISU played the first half without fear, but Kansas players responded in kind. The traditional KU second half run put the game pretty much out of reach.

As for winning by 30 or 40, Coach Self could have left all his starters in to the end and they might have won by that much. With Baylor looming, Coach Self was wise to give his starters a chance to rest early and to avoid the possibility of injury in a game that was all but decided with 10 minutes to play. Of course the true subs didn't enter until the 2:40 mark.

When a team makes 80% of their 3's in a half, it's an aberration, not a defensive lapse. Most players can't make that % with no defender so to do it in a game with a defender in your face, or running at you, is as much luck as anything. Sometimes teams have nights like this (see Auburn last year, Nova in the Final 4, etc.).

How about you enjoy the 20 point win instead of finding something to bitch about. Moaning about defense when this is the best defensive team of the last 20 years according to KenPom (all teams, not just KU teams) is ridiculous.

My two favorite plays were #2: Azibuke's block where he basically stole it while the guy was in the act of shooting, showing utter disrespect for the guy's talent's as a basket player, and #1: CB's steal and dunk.

And Dotson of course having an answer after pretty much every one of their big threes.

Great to see us win in another way beside defense.

"Alumni" update: Quentin Grimes is only shooting 32% from 3 this year for the U of Houston, and averaging 12.3 points per game.

I wish him the best, but he wouldn't be helping us that much, apparently.