Kansas Athletics has filed a motion in federal court to dismiss a lawsuit from former KU head football coach David Beaty that claims the athletic department owes him $3 million.

As first reported by the Kansas City Star, lawyers representing Kansas Athletics filed this past Friday in the U.S. District Court of Kansas a motion for dismissal of Beaty’s lawsuit for, in part, a “lack of subject matter jurisdiction.”

The motion included a 101-page memo that included arguments, exhibits, documentation and more.

KU Athletic Director Jeff Long fired Beaty with three games remaining in the 2018 season, Beaty’s fourth year in charge of the program. Per the contract extension Beaty signed in 2016, if Kansas Athletics fired him without cause, he would be owed $3 million.

Filed in March, Beaty’s lawsuit alleges a breach of contract and unpaid wages of $3 million owed to him.

Contacted by the Journal-World for comment Monday afternoon, Beaty’s lawyer, Michael Lyons, said he didn’t want to comment on the motion from Kansas Athletics itself other than to say, “We believe it’s a delay tactic.”

In the memo accompanying the motion filed this past Friday, lawyers representing Kansas Athletics claim the lawsuit from the plaintiffs (Beaty and DB Sports, LLC) should be dismissed, because:

— Plaintiffs are Kansas citizens suing a Kansas corporation and there is no basis for diversity jurisdiction.

— Kansas Athletics is “an arm of the state” and not a citizen for diversity jurisdiction purposes, and “is entitled to immunity from suit in federal court under the Eleventh Amendment.”

— Plaintiffs’ claim under Kansas Wage Payment Act fails to state a claim upon which relief can be granted.

A spokesperson for the KU athletic department, Jim Marchiony, told the Journal-World on Monday that KU had no comment regarding the motion for dismissal. He also said KU had no update to provide on the NCAA’s investigation into alleged possible violations committed by Beaty when he was the head coach at KU.

Below is KU’s formal statement on the matter, as released on March 12:

“Beaty was informed he would not be retained by KU on November 4, 2018, but would be able to coach the remaining games. Immediately following the end of the season, Kansas Athletics staff conducted standard exit interviews of all football coaches and staff, and through that process we learned of possible NCAA violations allegedly committed by Beaty. KU contacted the NCAA and the Big 12 Conference and began an investigation into the matter. Beaty refused to cooperate with the KU review and, ultimately, the NCAA took the lead in the still-ongoing investigation.

“The university has withheld payment of money owed to Beaty pending the outcome of the NCAA investigation. In a show of good faith, the university has placed the full amount owed in escrow.

“While disappointed in the court filing, the university is committed to seeking the truth and upholding our high standards of ethical conduct.”

Beaty declined to comment Monday on the motion for dismissal, opting to let Lyons speak on his behalf.

Hired by former KU Athletic Director Sheahon Zenger in December of 2014, Beaty went 6-42 as the Jayhawks’ head football coach over the course of four seasons, 2015-18.

KU’s 3-9 mark in his final season was its best under Beaty, who had three years remaining on the contract extension he signed in 2016 when the deal was terminated.

You can be a fan of David Beaty or his largest detractor. You can think Beaty's raise and contract extension were foolish decisions, but when it comes to Beaty's payout... please note the following: "Per the contract extension Beaty signed in 2016, if Kansas Athletics fired him without cause, he would be owed $3 million.". So it seems pretty simple to me. KU and the AD were absolutely not aware of any POTENTIAL violations by Beaty during the 2018 season. With 3 games to go... and based only on team performance and the future of the program at hand... the University of Kansas chose to terminate his contract ... WITHOUT CAUSE. That decision was made BEFORE any potential wrong-doings were raised at the end of the season. Therefore, David Beaty was fired without cause and is owed $3MM. After the season is over .. and due to exit interviews... new information comes out that maybe somebody did something improper. Well, that's too bad... because the decision had already been made where those potential improprieties were an absolute non-consideration.

How quickly the University was to jump on the idea of a coach doing some wrong-doing and alerting the NCAA. Where was this sanctimony when it came to Coach Townsend and the basketball staff? To listen to the administration, they have YET to have a conversation about Coach Townsend's involvement in the whole Adidas charade. As a proud alumnus of the University of Kansas, I am embarrassed at KU's stance in failing to pay Beaty the $3MM he is contractually owed... when it is 100% indisputably known by all that the reasons Beaty were fired were due to team performance and future direction... and had nothing to do with any "Just cause" consideration. And to top it off.. KU contends that they are keeping the $3MM in escrow as a show of "good faith". BS.... good faith would be to HONOR THE CONTRACT.

Agree, Possible "Just Cause" after the fact is horseshoes and hand grenades.

If after you made two payments and there were four pending, and you found out the payments were going to a cause that was unfit, would you stop payments? The answer is yes. KU has agreed to place this in escrow pending the outcome of the oversight arm that is out there. Do I agree with the oversight arm, usually not, but that is what KU has to work with. Upon finishing that investigation the payments will be paid to the appropriate party.

My point is that KU has made a decision from various guiding parties. From the outside looking in, it seems like we are holding back the pay that was owed, but if it wasn't in escrow, I would agree. I just think there is a part of the this story that we don't know about.

I'm actually surprised there isn't a FOIA request to the NCAA about pending football investigations with KU.

I'm not a fan of Beaty and thought the extension was ridiculous; however, I'm the first to say he signed the deal and should be paid, based on the contract. As of right now, all signs are pointing to KU actually following the contract.

But he continued to coach so obviously he was not 'fired' yet. He was simply a lame duck coach. If he was still considered 'employed' during the exit interview process, then KU has a case?

I feel like my alma mater is shafting David Beaty and I am not proud of it.

For right or wrong, we hired the guy that paid and extended him. I think this is nothing more than a means to settle for half or less than what the man is owed. This establishes a poor culture for every coach on staff or any potential hires not named Les Miles.

I was cool with the Les Miles hire, but this move seems ridiculous. There was a cost associated to moving on, pay him and let's start moving.

Just pay him and be done with it. The credibility we lose by not honoring a contract is not worth $3M.

Gotta love college football, where coaches can make millions of dollars even with a .125 win percentage. Good work if you can get it.

At least my favorite football team's coach actually earns his paychecks, along with the bonuses that come from going to bowl games.

ON KIRK FERENTZ, AND ON IOWA! 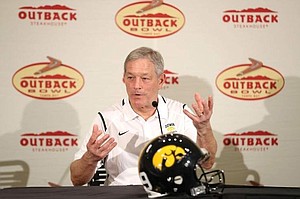 I have relatives who are big time Jayhawk Basketball fans. But, they support Nebraska Football. But, they don't go around making such comments about Jayhawks football program just to make themselves feel better or for a self patting on their backs.

Bryce -- which is your favorite team? The Hawkeyes or the Jayhawks?

All of you that are so quick to condemn the University's actions, have you examined Beaty's contract to see what it said about his obligation if NCAA recruiting violations happen on his watch with his knowledge? Yeah, I didn't think you had...

Bville Hawk: Recruiting violations... whether they happened or not, did not factor into the decision to fire David Beaty. Hence, the decision to fire him and the actual firing of him was without cause. There is no ex post facto law where you can go back and change the basis for your decision to fire him. Again, I ask: Where is this sanctimonious position by the KU Athletic Department and University when it comes to investigating Kurtis Townsend and his communications with Adidas? I'll tell you KU's investigative efforts... it lies in the sound of crickets.

OK, thanks, Mike. But what if there was a clause in his contract that said if recruiting violations occurred with his knowledge on his watch then any buyout clause was null and void? Are we 100% sure he was fired "without cause?"