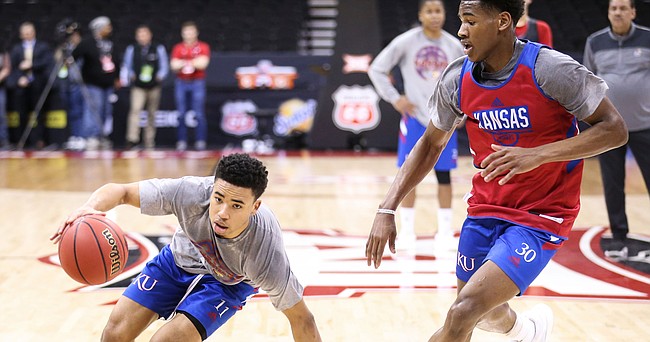 Kansas guard Devon Dotson (11) regains control of the ball as he drives against Kansas guard Ochai Agbaji (30) during an open practice on Wednesday, March 13, 2019 at Sprint Center.

Not going to be home for the game? Sign up for ESPN+ and watch your Hawks on the go.

In each of KU’s two regular season meetings with Texas — a one-point win in Lawrence and a 10-point loss in Austin — the Jayhawks played four guards against UT’s long and athletic front line and paid for it dearly.

Out-rebounded in both games, the Jayhawks also gave up far too many easy baskets to the UT big men, who do a masterful job of flashing to the rim and making themselves available for lobs and easy finishes.

Freshman Jaxson Hayes, sophomore Jericho Sims and senior Dylan Osetkowski combined to shoot 19-of-36 against the Jayhawks in their previous two meetings. Beyond that, the ability of those bigs to roam around on defense also disrupted the KU offense.

Fast-forward to today, at the start of postseason play, and the Jayhawks are prepared to tackle Texas with a much different look, one they hope will better prepare them to handle Texas’ size and ability to convert around the rim.

“I think we have been better since we’ve been playing two bigs and certainly, with David,” KU coach Bill Self said of inserting 6-foot-10 freshman David McCormack into the starting lineup. “I do think that we need to have them (our bigs) giving their bigs something to guard. I don't think we did that at all the second time we played them.”

Texas leads the Big 12 in 3-pointers attempted, from a strategy standpoint, taking 42.7 percent of its shots from behind the 3-point arc.

However, the Longhorns also rank just eighth in the Big 12 in 3-point percentage, knocking in 35.2 percent of those 3-point attempts.

On the flip side, the Longhorns’ defense allows the lowest percentage of 3-pointers attempted in the conference (34.7 percent of opponents’ shots come from behind the arc) but also rank last in the Big 12 in 3-point percentage allowed, giving up 38.8 percent shooting to foes throughout the Big 12 season.

What that essentially means is that even though they take a lot of 3-pointers they don’t necessarily make a lot. And on defense, it’s the opposite, with UT giving up fewer looks overall but allowing opponents to get good looks when they do come.

The simple solution here comes down to execution, ball movement and rhythm. If KU’s offense has that kind of flow to it, and the KU defense can make things hard for the Longhorns to move the ball freely in half-court sets, the battle behind the 3-point line figures to go KU’s way.

3. Keep them off the line

Texas ranks ninth in the Big 12 at getting to the free throw line and the Jayhawks do the second best job in the Big 12 of avoiding fouls that put opponents in charity situations.

Having said that, the Longhorns got the free throw line 23 times — and made 21 of them — during KU’s loss in Austin, a factor that clearly played a role in the Longhorns’ ability to put points on the board in the 73-63 win for Texas.

In the game at Allen Fieldhouse, UT went to the line just seven times and made all seven free throw attempts.

On the season, UT is a 71.3 percent shooting team from the free throw line, but they clearly have had more success than their average against Kansas. The key for the Jayhawks to avoid having that hurt them is to avoid fouls altogether.

All season long, KU coach Bill Self has asked for tougher, more tenacious defense from his perimeter players out top.

Whether that’s guarding the ball tight and getting under guys to make them uncomfortable or playing in passing lanes, denying easy catches and trying to force their opponents to initiate their offense closer to halfcourt than they’d like, Self would love nothing more than to see that type of defense become second nature from this point forward.

While most of KU’s guards are young in their own right, they’ll be facing a Texas team that also fields young guards, making this, at least in spots, a battle of whichever team can stay most comfortable in the face of what figures to be intense halfcourt pressure.

The postseason has arrived and the Jayhawks are in a much different position than any they have been in the past decade.

Playing out of the 3 seed and facing a tough matchup in the opening round, Kansas will have to be sharp from wire to wire to get by Texas.

While the win would be nice and would put the Jayhawks into the Big 12 semis, the big picture gain comes from the fact that it’s now-or-never for the Jayhawks to put together the kind of chemistry and focus that can lead them on a long postseason run when the NCAA Tournament tips off next week.

“I do think there will be a sense of urgency,” Self said earlier this week. “I think they'll be very excited to be a part of this and go roll the dice. I've actually thought that we have been always motivated to go over there (Big 12 Tournament) to win but it’s been a mature motivation. It hasn’t been a ‘rah, rah’ motivation at all because deep down in our guys’ core, what we’re trying to do is validate what we’ve already done. We’re playing for a No. 1 or a No. 2 seed line. So it’s different this year. I would think that would be motivation. … I’m not sure the young kids really understand what the seeds and all that stuff really means and how it all plays out. I'm not sure it's important that they do.”

All that’s important is that they play with the kind of focus and purpose required to survive and advance in the postseason. If they don’t, it could be a short trip to Kansas City and create even more uncertainty heading into the NCAA Tournament.

It will be interesting to see how motivated the young guys are. There have been a couple games lately where they should have been very motivated and were pretty stinky instead (TTU, OU).

Matt - Hope your predictions are better for the quarters than round 1's 0-fer.

Roach is out of Shaka’s doghouse, so expect him to play. Texas’ perimeter just got tougher to defend.

On an unrelated topic....All we have been hearing all year is how GREAT Duke is...Duke this....Duke that....how they were one of the GREAT teams...maybe ever....Question....Did Duke win their League?????.....Answer ...NO...they did not even finish 2nd.....for whatever its worth...I think we are just as good or better than the so-called greatest team...

They didn't win because Zion Williamson had a shoe blowout against UNC and has been out of action. If he's 100 percent, look out.

I'm not sure I'm ready to say we're just as good or better but it is rather funny to me to see the latest journo darling hype magnet fizzle a bit. Remember when UK had the same thing going for a few years? It is just easier to pick a theme for the season than to bother with investigating and developing ideas as the season progresses.

Huge hat tip to LJW staff for riding the twisting convoluted path of this season. The ongoing story development has been appreciated. Guessing it was a lot more work but hopefully interesting for you all as well.

Tech lost and Wade is out of the tournament. The door is open.